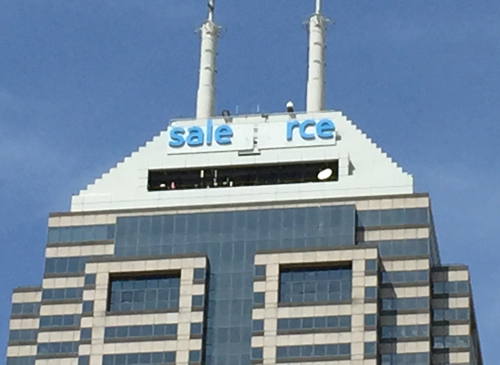 Salesforce.com Inc. trimmed its annual revenue and profit forecasts, indicating that the coronavirus-induced recession has weakened demand for the software maker’s cloud applications. Shares declined 4% in extended trading on the news.

Sales in fiscal 2021 will be about $20 billion, down from an earlier projection of as much as $21.1 billion, the San Francisco-based company said Thursday in a statement. Analysts, on average, estimated $20.7 billion.

The Salesforce Marketing Cloud division has been based in Indianapolis since Salesforce bought locally-based ExactTarget for $2.5 billion in 2013. The company has about 1,700 Indianapolis employees and 30,000 overall.

CEO Marc Benioff, now heading the company solo after co-CEO Keith Block stepped down from his post in February, pledged in March that Salesforce wouldn’t conduct major job cuts for 90 days, and encouraged other CEOs to make the same promise.

“The guidance is a bit disappointing when everyone is watching to see how Salesforce does because it’s going to be a bellwether for a lot of other folks,” Rebecca Wettemann, an analyst at Valoir Inc., said in an interview. “It reflects the difficult times right now.”

In the fiscal first quarter, sales increased 30%, to $4.87 billion, from a year earlier. Adjusted profit was 70 cents a share.

“Our results, amidst this global crisis, demonstrated our ability to execute at speed, innovate at scale and the strength of our business model,” Benioff said in the statement.

Revenue from Sales Cloud, the flagship product, increased 16% to $1.25 billion. The company leads the market for sales-tracking software, but growth rates have slowed over time.

Service Cloud sales increased about 23%, to $1.25 billion, in the period ended April 30, narrowly surpassing Sales Cloud. The software maker offers this tool so companies can communicate with field employees and customers, an area where it faces competition from ServiceNow Inc., Zendesk Inc. and others.