Home » MIKE LOPRESTI: Strange twists, turns in sports fit with the surreality of 2020 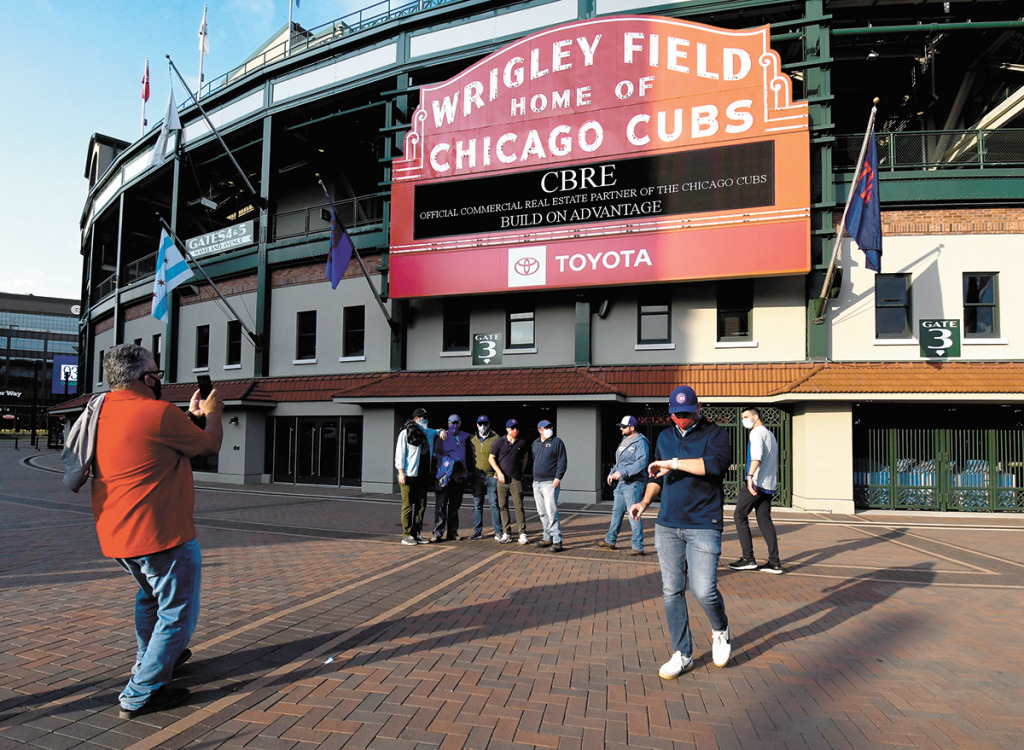 Chicago Cubs fans stood outside Wrigley Field on Sunday before the final home game of the season. (AP photo)

Welcome again to the continuing saga of The Year Where Nothing Is The Way It’s Been. Which is why we keep hearing the phrase: “That’s so 2020.” And now here comes Big Ten football and the baseball playoffs to prove the point.

This is the year, for instance, the Kentucky Derby champion was spooked by his flower garland in the winner’s circle—you humans know what you can do with your Run for the Roses—and sent his trainer tumbling into the Kentucky grass like a bowling pin.

This is the year the greatest player in tennis hit the knucklehead shot heard ’round the world, namely a frustrated smack at the ball that inadvertently nailed a line judge and got Novak Djokovic bounced from the U.S. Open, and the judge treated like Public Enemy No. 1 in Serbia.

This is the year Roger Penske took over the wheel of the Indianapolis Motor Speedway and had to zigzag through a flurry of obstacles to even run the Indy 500. Then watched it finish under a yellow flag.

This is the year an amateur soccer team in Germany, wary of the virus, practiced social distancing so ardently during a match it would make Dr. Anthony Fauci proud—and lost 37-0.

This is the year the general manager of the Washington Nationals was thrown out of a game while standing by himself in the upper deck, because his voice carried in an empty ballpark. And where Josh Donaldson of the Minnesota Twins was ejected for how he finished his home run trot, kicking dirt on the plate as retaliation for an earlier strike call.

This is the year the New York Yankees hit five home runs in one inning—three on consecutive pitches—and the Atlanta Braves won a game 29-9. This is the year a series between the Mariners and Padres had to be moved 1,250 miles south from Seattle to San Diego, since wildfires made the air nearly unbreathable in the state of Washington.

This is the year the women’s tennis quarterfinals bracket at the U.S. Open included three mothers. And the men’s U.S. Open in golf was won by long-ball basher Bryson DeChambeau, who hit only 23 of 56 fairways, but kept working his way out of the rough and dominated by six strokes. And a 23-year-old former academic All-American from Berkeley, Collin Morikawa, became the first man ever paired with Tiger Woods at a PGA Tour event who was born after Woods became pro. A few weeks later, Morikawa won the PGA championship, only 15 months after graduating from the University of California.

This is the year the Golden State Warriors nosedived from five consecutive NBA Finals appearances to the worst record in the league. The Washington Nationals dropped from World Series champions to last place. And the San Antonio Spurs missed the playoffs for the first time since the Clinton administration, a streak older than Facebook.

This is the year the Maui Classic in college basketball was moved to Asheville, North Carolina, and Disney World became the capital of the NBA.

This is the year the baseball postseason might well include three teams not seen in the playoffs for more than a decade. The San Diego Padres, Chicago White Sox and—if they hold their spot in the final days—Miami Marlins, who went 57-105 just last season.

It is also the year the St. Louis Cardinals went 16 days without a game because of virus infections, then had to play 11 doubleheaders in six weeks.

This is the year Big Ten football was gone yesterday, here today, and now will kick off its season a week before Halloween. It is the year Nebraska publicly quarreled with the conference about the cancellation decision, then when the schedule came out on a revived season, was assigned to open against Ohio State, Wisconsin and Penn State. That’ll teach the Cornhuskers to glower at the league office and mention the term “lawsuit.”

It all makes you wonder what could possibly happen next.

This will be the year Indiana—instead of opening the season against Ball State and Eastern Illinois, like in 2019—has to play Penn State, Michigan, Michigan State and Ohio State in the first five weeks. For the record, the Hoosiers are 4-62 against those four teams this century.

This will be the year the Old Oaken Bucket is in Bloomington on Dec. 12. By the way, the low that date last season was 23 degrees.

This might be the year Ohio State gets in the College Football Playoff with eight regular-season victories. Or as many as IU had playing in the Gator Bowl last season.

Then there’s baseball, with the postseason imminent. This could be the year the Tampa Bay Rays play the San Diego Padres in the World Series, which would be the first time in 40 seasons that neither franchise in the Series had ever won it before.

This could be the year of an all-Chicago World Series between the Cubs and White Sox. The only other time that happened was 1906. Imagine the fervor in Wrigley Field on the north side of Chicago and Guaranteed Rate Field on the south side—except the World Series will be held more than 900 miles away in the Arlington, Texas, bubble.

This could be the year the Dodgers are kings of baseball. Considering their roster, that isn’t much of a surprise, but this is: It would be their first title in 32 years. They are considered among the blue bloods of the game, but 18 other franchises have won the World Series since the Dodgers’ last championship.

This could be the year the Cincinnati Reds—if they make the playoff field—meet the Chicago White Sox in the World Series, 101 years after the Black Sox scandal. That’s when the Reds accomplished the faintly embarrassing footnote of requiring eight games in a best-of-nine format to beat a team that was throwing the World Series.

This could be the year that as many as 19 postseason games are played in the Rangers’ Globe Life Field, since it is the epicenter of baseball’s October bubble. But the Rangers won’t even be in the playoffs. One of the few upsides for Texas fans this season was watching the Cy Young contention of Lance Lynn, who once upon a time was a Brownsburg Bulldog.

This is the year with so many teams in the postseason, there will be eight playoff games in one day on Sept. 30.

This could be the year the Minnesota Twins do something about their remarkable playoff dry spell of 16 postseason losses in a row, 13 to the Yankees. When the last week of the season began, whom did it look like the Twins would be facing in the first round?