Home » MIKE LOPRESTI: These rival coaches have been a pain in our posterior 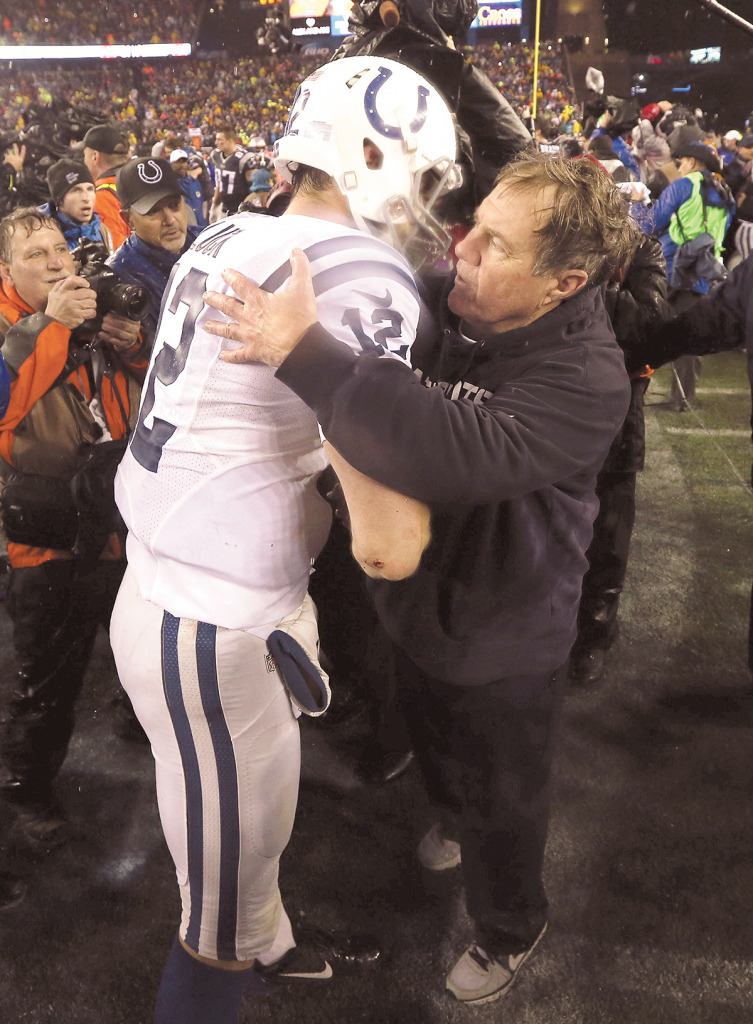 Bill Belichick … Erik Spoelstra … Bill Cowher … anyone coaching against the Colts in the first week of the season.

Oh, hello. Just collecting candidates for the Pain-in-the-Posterior Top 10. To qualify, a coach’s career had to be conspicuously enriched by inflicting anguish on teams from the state of Indiana. It’s the Nemesis Club. This came to mind recently with the passing of Lute Olson.

Lute Olson? He built a college basketball empire at Arizona, but before that, made his name at Iowa, becoming a pebble in the shoe during some of Bob Knight’s golden days. Take 1981, when IU stormed to the national championship, never having a tournament victory under 13 points. And 1983, when the Hoosiers won the Big Ten title. They went 0-4 against Olson those seasons. He was 5-1 against Knight his last three years in Iowa City, then left for Tucson, and never had a team play against Indiana again. So let’s make Olson No. 10 on the list and go up from there.

9. Joe B. Hall. His Kentucky teams knocked IU out of the Sweet 16 in 1983 and upset the No. 1 ranked Hoosiers in 1979. But a single game puts him here. The Big One. The 92-90 epic over unbeaten Indiana in the 1975 regional title game that might have cost the Hoosiers back-to-back perfect seasons.

8. Lots of guys who coached football at Ohio State or Michigan. The 19-141-1 record for Purdue and IU against those two schools since 1966 is rather self-explanatory, though it suggests the programs are the nemesis, rather than any individuals. We could also include the seven NFL coaches who have made the Colts 0-1 the past seven seasons in a row, Jacksonville’s Doug Marrone the latest. That streak is not a nemesis, but rather a bad Indianapolis habit that’s hard to explain.

7. Phil Jackson. The Pacers twice made real noise about winning a championship—until they ran into Jackson teams in two different cities. As chronicled in “The Last Dance,” Indiana had Michael Jordan and Chicago teetering over the edge in the 1998 Eastern Conference finals, but the Bulls rallied in Game 7. Two years later, the Pacers went splat against Jackson’s Los Angeles Lakers in the NBA Finals. True, the real nemeses were Jordan, Kobe Bryant, et al. But Jackson was sitting on the other bench, when two of the best Indiana seasons in its NBA history ended.

6. Norv Turner. He was San Diego Chargers coach for six seasons, time enough to go 4-1 against Indianapolis, twice eliminating Peyton Manning teams from the playoffs. That included beating the defending Super Bowl champions 28-24 in 2008, using a backup quarterback and running back to do it. The defeat was the Colts’ final game in the RCA Dome.

5. Roy Williams. Knight’s last true Final Four-caliber team at IU was 1993, and the top-seeded Hoosiers were on their way—until Williams’ Kansas evicted them in the Elite Eight. Just as the Jayhawks had done two years earlier in the Sweet 16. Later, Williams moved along to North Carolina, where he knocked Indiana and Notre Dame out of the same regional in 2016, and ousted Butler the next season. He’s 8-1 against Indiana schools in the tournament.

4. Erik Spoelstra. Apparently, he’s one of the last guys the Pacers want to see come playoff time. His Miami Heat knocked out Indiana three consecutive years in 2012-2014, twice in the conference finals. Someone named LeBron also had a little to do with that, by the way. Last month, the Heat swept the Pacers right out of their Disney hotel. That makes Spoelstra 4-0 against Indiana in the postseason.

3. Bill Cowher. The Colts didn’t need Peyton Manning to get to the Super Bowl. Well, almost. They had the Pittsburgh Steelers down to their last gasp in the 1996 AFC Championship Game—in hostile, Terrible Towel-waving Three Rivers Stadium, no less—but it slipped away at the end, 20-16. Indianapolis was back in the playoffs next season, and the Steelers rolled 42-14. Nine years later, the Colts started the season 13-0 and were considered a strong Super Bowl contender but didn’t get past their first playoff game—an infuriating home loss to Pittsburgh. Cowher was on the Steelers sideline for all of those, and lots of regular-season frustration, too. He was 7-1 against Indianapolis.

2. Bill Belichick. You remember how January has ended so often for the Colts, with a playoff loss to the New England Patriots. It happened twice when Manning was quarterback, and twice more with Andrew Luck in the huddle. Average margin of Indy defeat in those four games: 21.5. Overall, Belichick is 16-6 against the Colts at New England, a dominance interrupted only by the occasional Colts counterattack, the 2007 AFC Championship Game a notable example. There was something else in common in those games. The Patriots quarterback was Tom Brady, but he isn’t there anymore.

That brings us to the top of the list. Mr. Pest, please step forward for your award …

1. Mike Krzyzewski. Whose team was responsible for taking out Knight’s last Final Four entry, cutting an IU rally short 81-78 in 1992, shooting 42 free throws that night while the Hoosiers had 16?

Who was behind the defensive game plan that threw a blanket on Glenn Robinson and put an end to No. 1 seed Purdue’s Final Four hopes in the 1994 regional championship, arguably Gene Keady’s best chance?

Who was the party pooper in 2010, spoiling a happy ending to the Butler fairy tale in the national championship game in Lucas Oil Stadium?

Guilty on all three counts, Krzyzewski and Duke.

He has been around for eons, coaching the Blue Devils through seven presidents. That’s presidents of the United States, not Duke. So he’s had time to cause plenty of states trouble. But personally supervising the gutting of realistic championship hopes of three different schools in Indiana earns him the highest spot on this august list. The one blip is the upset the 2002 Hoosiers put on the top-ranked Blue Devils in the Sweet 16, on their way to the national title game. With apologies to the buzzer-beater over No. 1 Kentucky in 2011, that remains the signature IU victory this century.

You can extend Krzyzewski’s troublesome ways to the Big Ten at large. Throw out Maryland and its former ACC membership days, and Krzyzewski is 67-17 against the other league schools, including an unfathomable 13-2 over Michigan State.

His Duke teams are 3-0 at Indiana and Purdue, and 9-2 in NCAA Tournament games in Indianapolis. He’s won more national championships just in Indy—three—than all but five coaches have won in history anywhere. He’ll do as The Big Pain.•