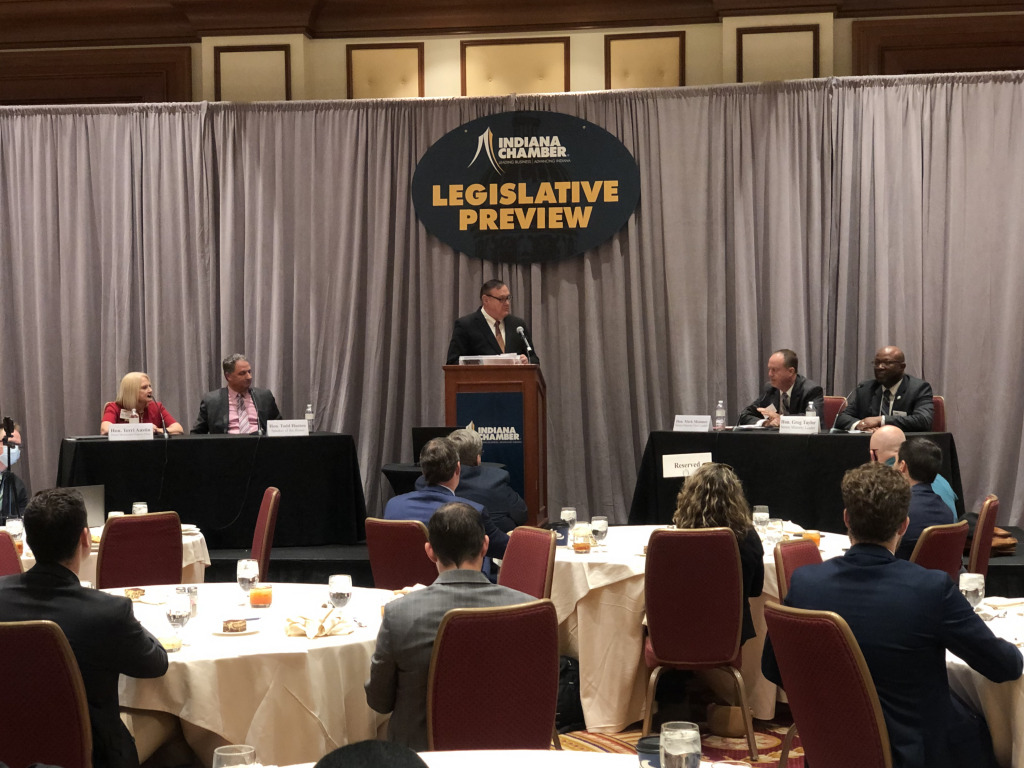 Business tax cuts and nixing government-imposed vaccine mandates will be among the legislative priorities for Indiana Chamber of Commerce next year, and top GOP lawmakers mostly appear to be on the same page.

During the chamber’s annual legislative preview luncheon on Monday, the organization laid out several top priorities for the coming legislative session in January.

A top bullet point on that list for next year is opposition to government-imposed COVID-19 vaccine mandates on businesses. Democratic President Joe Biden’s vaccine mandate on businesses with more than 100 workers has faced mostly Republican pushback. Indiana is among several states that have filed lawsuits against the rule.

“Employers are currently being squeezed from both directions of the federal government in the form of a vaccination mandate,” said Kevin Brineger, president and CEO of the Indiana Chamber of Commerce.

During the panel discussion  at the event with top Republican and Democratic lawmakers, House Speaker Todd Huston, R-Fishers, said he generally supports employers’ deciding whether to require vaccines for their employees. But he also cautioned employers to not be too harsh on granting medical and religious exemptions.

“I would offer a level of caution in the aggressiveness of how they handle this issue,” Huston said.

He said a group of lawmakers are working on language and having discussions for possible legislation to expand exemptions beyond religious and medical to conscience and personal belief.

Senate Democratic Leader Greg Taylor of Indianapolis said he respected those who oppose Biden’s mandate, but he is against any bans on vaccine mandates.

“Employers have a responsibility not just to their employees, but to the entire community,” Taylor said.

Another top priority for the Chamber is for the Legislature to consider cutting Indiana’s business personal property tax, calling it “among the largest overall business property tax burdens of any state.”

The Chamber proposed phasing out the application of the 30% depreciation floor on all personal property taxes, which currently means the value of the business equipment being taxed can’t drop below 30% of its original value.

Huston said he was in favor of getting rid of the 30% depreciation floor because it would help small and medium-sized businesses.

“I think it’s the last bad business tax we have in play,” Huston said.

Sen. Mark Messmer, R-Jasper, who is the Senate majority floor leader, was more hesitant about the idea of cutting taxes. Messmer said he would be up for considering legislation on the business personal property taxes if it addressed how to offset the costs associated with the cut, because local governments rely on those tax revenues. However, he’d rather wait until 2023, a year when the Legislature drafts the next biannual budget, to consider the issue.

“When that federal stimulus money dries up, at this point I don’t think we can accurately predict where those tax revenues will settle out,” Messmer said.

Taylor said during the panel discussion that legalizing the use of marijuana could be a way to offset any losses in revenue associated with cutting the business personal property tax.

The topic of marijuana was mostly avoided during the panel following that mention. Huston and Messmer told reporters after that marijuana legalization would likely not see the light of day next session because it is still illegal federally.

“I’ve expressed my concerns in the past. They haven’t changed,” Huston said. “And I also think when you make the argument about having that substantial public policy change just because you’re trying to chase dollars, makes no sense to me.”

Indiana, through a variety of state initiatives, is working to make the most of the industry’s transition to electric vehicles. Huston said EV is one of the industries Indiana needs to keep up with to compete with other states.

Last session, the Legislature approved a bill on a bipartisan vote to create the Electric Vehicle Commission to explore how Indiana’s automakers and its workforce can adapt to the evolving electric vehicle market.

“There’s no doubt the change is being made. It’s happening fast, and you know, we to be nimble and proactive and address it,” Huston said.

The legislative session starts in January.