Home » MIKE LOPRESTI: Sunday at the sportsbook— a new house of worship 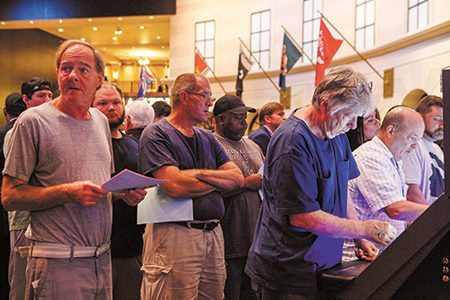 Patrons lined up to place sports wagers on Sept. 1—the first day betting was allowed—at Ameristar in East Chicago. (Photos by Kale Wilk/The Times via AP)

SHELBYVILLE—This being a new era in legalized sports betting in Indiana, it seemed a good time to get acquainted. So … a day at a sportsbook on the opening NFL Sunday.

The first thing you see when you walk in the door of the Indiana Grand Casino? An ATM machine. Also a hand sanitizer on the wall, so you can give over your money germ-free.

It’s 10:30 in the morning, and the main casino floor is relatively quiet. Walk past the slots, the video blackjack machines and the empty poker tables to the corner with the words Race Sports Pub … and 30 people are already in line waiting to make bets.

Lots of Colts jerseys in line. But also Cowboys, Cardinals, Bengals. And what’s with the guy in a Tom Brady jersey? It takes a 35-minute wait to get to the betting counter, which is next to the glass-enclosed jerseys of Peyton Manning, Edgerrin James, Joseph Addai and Dominic Rhodes. Gov. Eric Holcomb dropped by here the other day to mark the opening of sportsbooks in Indiana and put money down on the Colts to win the Super Bowl, the Pacers to win the NBA Finals, and the Fever to win a game. He probably didn’t have to wait in a line like this.

Finally, the moment of truth, when the lady behind the counter in a blue jersey with the word Winner on the back asks for the choices. A final gaze at the electronic board of numbers behind her, and then the decision: Seven games, $10 on each.

Philadelphia giving 10 points to Washington. The Eagles are at home, and powerful.

Buffalo taking three at the New York Jets. The underdog has won nine of the last 11 meetings.

Baltimore giving 6-1/2 at Miami, since the Dolphins are lousy.

Cleveland giving 5-1/2 to Tennessee, since everyone seems so gaga about the Browns.

Seattle giving 9-1/2 at home to Cincinnati. The Seahawks have won 10 home openers in a row.

And finally, the Colts getting 6-1/2 at the Los Angeles Chargers. You’d think any team that someone just offered $3.2 million to buy could come within a touchdown, Andrew Luck or not.

Now, let’s settle in to one of the padded recliners, in front of a huge wall with 20 TV monitors. It looks like the operations room at NORAD. We’re here to watch either touchdown passes—or bombers on radar coming in from Russia.

By 12:50, the betting line is 100 people long, stretching out of the sportsbook and down the casino floor, past the slot machines. Things are getting a little tense. All bets for the 1 p.m. games end with the kickoff, and it’s obvious some of these folks won’t make it. A man and his wife are at the counter, carefully studying each decision as if it’s a home mortgage. The waiting line ain’t happy. They finish, as some frantic wannabe betters look at their watches and shout Finally! The next man in line is wearing a Steelers shirt, with a wad of money in one hand, and shaking his betting sheets impatiently with the other. At 12:59, it’s his turn. Just in time.

All seven 1 p.m. games are on the monitors before us, each on one small screen. Chiefs vs. Jaguars also gets marquis treatment with a nine-screen big picture.

“Must be the main game,” a man mentions.

“They’re all the main game when you’ve got money on them,” says his friend, reciting the first law of a sportsbook.

Kansas City scores in a hurry, and there must be a lot of Chiefs money in the room. The roar is like we’re in Independence, Missouri.

It’s almost sensory overload, trying to keep up. In the lower left corner, the Bills have just thrown an interception. On the right side, it starts to look bad for Cleveland. “Some teams you don’t bet on,” a man nearby mutters from his chair. “You don’t bet on the Browns.”

Now he tells me.

A woman in one of those No. 1 Winner shirts comes by to take drink orders. I go for a diet soda. The guy down the way who is already in trouble with the Browns and the Eagles opts for something harder. “Make it a double,” he says, just as the Titans score again.

Latecomers stream by the counter, wagering on the 4 p.m. kickoffs, including the Colts. A guy just made his bet in a Johnny Unitas jersey.

Back to the big screen. We’re looking great with the Ravens and Chiefs. The Bills rally. The city of Buffalo and I couldn’t be happier. The Eagles build a 12-point lead. Outstanding, since they’re giving 10. But the Redskins score with six seconds left, cutting the final margin to five. A pained groan rises in the room from all those holding Philly slips. It’s not often you see this much anguish in Shelbyville over a Washington Redskins touchdown pass.

As the late-afternoon games start, the multi-screen wall is not all football. In the top left corner, the Colts are already down 7-0. In the lower left, Rafael Nadal is up 1-0 in the U.S. Open. In the lower right, they seem to always be cleaning up debris after a car crash.

Back to the upper left corner. Adam Vinatieri misses a PAT kick. Then a field goal attempt. Then another. He’s looking very 46. Much shock and grumbling in the sportsbook. But, hey, the Colts tie in the final seconds of regulation, and all those in recliners seem relieved. Probably because Indianapolis still has a chance to win, but also maybe because overtime clinches the bet, if you took the Colts at 6-1/2.

Alas, a Chargers touchdown settles it 30-24. The man sitting in the next chair seems a fervent Colts fan and takes it hard. It doesn’t seem like the time to say, “Look at the bright side. They covered!”

Let’s walk across the casino floor—gee, the slots have gotten busier—and stop by the cashier window. My final tally: Four games to the good, three to the bad. Total winnings: $6.40. OK, it’s not exactly the Powerball. Resisting the urge to put $6.40 at the video blackjack or return to the sportsbook—open until midnight!—and bet No. 92428, which is the Ottawa Senators winning the Stanley Cup at 400-1, I look for the exit. Time to head home.

Meanwhile, the hopeful still trickle by the counter. The American Game Association predicted 15% of U.S. adults will bet on the NFL this season, and 7 million will do it in a sportsbook. Some of them were in line in Shelbyville last Sunday.•

One thought on “MIKE LOPRESTI: Sunday at the sportsbook— a new house of worship”