For the Lilly Endowment, a good year means it’s time to cash in.

The Indianapolis-based endowment, one of the nation’s largest charitable foundations, is unloading hundreds of millions of dollars of stock in its namesake company, drugmaker Eli Lilly and Co., continuing a sell-off strategy it began more than a decade ago.

Since September, the endowment has sold 2 million shares of Lilly stock in 25 transactions, raising $443.8 million, according to government filings.

The endowment says the main reason for the recent sales is to raise cash for more grants. Under federal law, charitable foundations are required to give away at least 5% of their assets annually. The endowment saw its assets grow significantly last year, up 29% to $15.1 billion. The value of the endowment has nearly tripled since 2010, when it had assets of $5.3 billion.

Much of that growth can be attributed to the 37% rise in 2018 in the stock price of Eli Lilly and Co., by far its largest holding. The endowment’s most recent tax return shows that its holdings in the drugmaker represent about 90% of its investment assets.

“When the market value of those assets is high, the endowment must generate additional cash to cover the required distribution amount,” said Judith Cebula, the endowment’s spokeswoman.

The endowment has more than $547 million in grants payable this year. Next year, it could be even more, Cebula said.

The stock sales supplement another major revenue stream—dividends paid on Eli Lilly and Co. shares. That dividend—64.5 cents per share in recent quarters—generates about $300 million a year for the endowment.

The size of that dividend deluge would suggest Lilly needed to sell only $200 million in Lilly stock to meet its distribution requirements. Cebula said the endowment has sold more to build cash reserves “sufficient for it to cover expected grant obligations and operating expenses in the next year or so.”

She added: “With the projected dividend income for next year and the cash the endowment has raised from stock sales, it is getting close to the amount of cash it will need to pay the endowment’s required distribution in 2020.”

She did not specify how much more Lilly stock the endowment planned to sell in coming months.

In 2006, about 95% of the endowment’s assets were in Lilly stock, a concentration that drew criticism from many investment professionals as too risky. If the pharmaceutical company ran into serious trouble and saw its stock price plummet, the endowment could lose much of its wealth.

So in 2006, the endowment pledged to sell $2 billion in Lilly shares over the next few years.

The proclamation would have been a huge turning point for the endowment—if it had followed through. But the onset of the financial crisis in 2007 caused stock markets to plunge. Not wanting to unload shares into a weak market, the endowment put the brakes on diversification.

Instead, it has continued to sell shares over the years at a measured pace, slowly moving away from the “let it ride” philosophy it had followed since three Lilly family members bequeathed stock to the foundation to launch it in 1937.

As Lilly shares appreciated in value over the years, so did the endowment’s assets. During Lilly’s glory years in the late 20th century, the company’s stock climbed as high as $108. 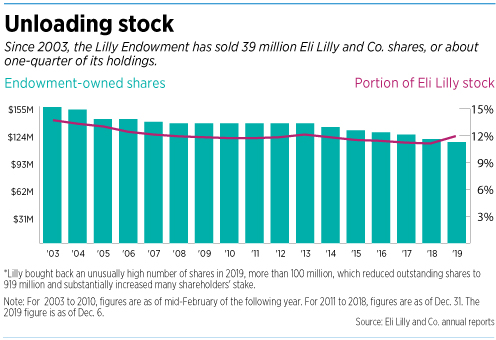 But the good times ended with a bang that stunned the Indianapolis business community: In 2000, a court stripped the drugmaker of its patent protection on its top-selling product, the antidepressant Prozac. The move cost Lilly billions of dollars in lost sales and sent shares on a long swoon.

Over the next decade, the company struggled to stabilize. It launched a series of profitable drugs for schizophrenia, depression, cancer and osteoporosis. But eventually, it lost patent protection on too many leading products, without new ones to pick up the slack in sales. The stock slid to as low as $29 during the 2008 financial crisis.

Since 2003, the endowment has sold 39.5 million shares of Lilly stock, or about one-quarter of its holdings in the company.

Some investment professionals say the endowment remains way too concentrated in Lilly stock.

“I believe any investor who has 90% of his assets in one stock is assuming too much risk,” said John Guy, an Indianapolis-based investment adviser. 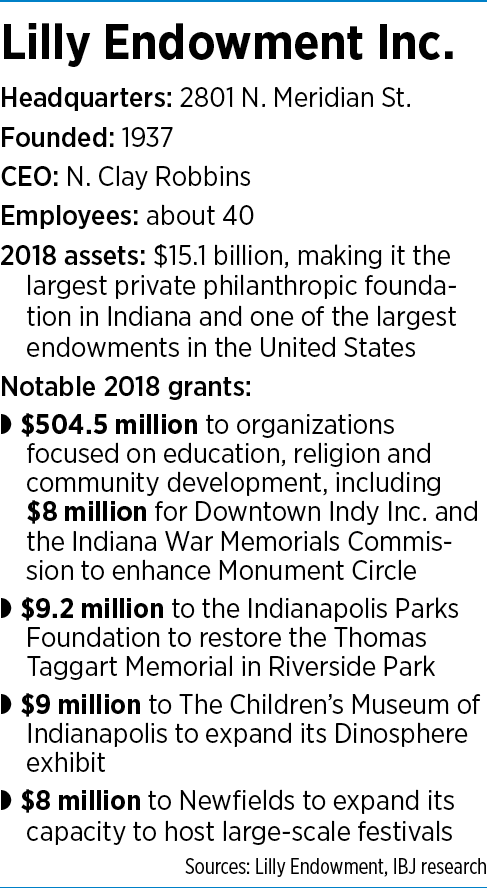 For years, the endowment’s big position in Lilly stock gave the company a sense of security. While many other drugmakers were acquired in a flurry of takeovers in the past decade—including Warner-Lambert by Pfizer, SmithKline Beecham by Glaxo Wellcome, Celgene by Bristol-Myers Squibb and Schering-Plough by Merck—Lilly could count on the endowment’s backing to help it remain independent.

Now that the Lilly Endowment has reduced its stake to 12%, that backing seems less solid. But some investment and philanthropy experts say the endowment still would yield clout if Lilly were chased by an unwanted suitor.

“Twelve percent is not huge, but it’s not small,” said Les Lenkowsky, professor of public affairs and philanthropy at Indiana University in Bloomington. “I think it still helps protect Lilly against a hostile takeover. It doesn’t make Lilly immune from these situations, but it helps.”

“If anyone wanted to buy Lilly, they would still have to get the other big shareholders on board, including the Lilly Endowment,” Foster said. “Twelve percent is still a big number.”

The Lilly Endowment did not make its executives available for an interview with IBJ. But as recently as 2014, the endowment stated that it intended to maintain Lilly stock as its primary asset. “These statements continue to apply to the endowment’s recent sales,” said Cebula, the endowment’s spokeswoman.

Mark Taylor, a spokesman for Eli Lilly, reaffirmed Lilly’s strategy is to continue as an independent company. He said executives meet regularly with investors to tell how Lilly “is in the early phase of an exciting period of prolonged growth for the company, driven by an expanding portfolio of new medicines and improved productivity.”

And Lilly stock is treating the endowment well again. These days, Lilly shares are trading at about $125, a remarkable comeback driven by several solid years of profitability and investor optimism over the sales potential of drugs in its pipeline.

“I think Lilly is in pretty good shape,” said Les Funtleyder, a health care analyst with E Squared, a hedge fund in New York City. “Sales are decent. They have some interesting compounds in the pipeline. They are pushing heavily into new treatments for diabetes and cancer. The picture looks good.”•