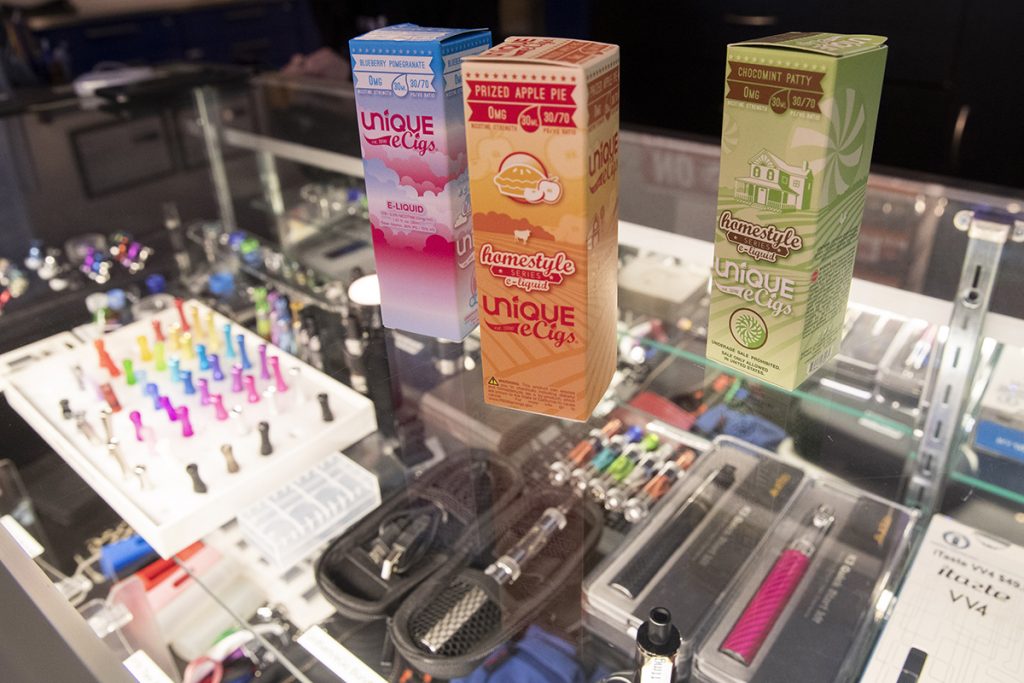 U.S. health officials will ban most e-cigarette flavors popular with underage teenagers, but with major exceptions that benefit vaping manufacturers, retailers and adults who use the nicotine-emitting devices. (AP Photo/Mary Altaffer)

U.S. health officials will begin cracking down on most flavored e-cigarettes that are popular with underage teenagers, but their plan includes major exceptions that benefit vaping manufacturers, retailers and adults who use the nicotine-delivery devices.

The Trump administration announced Thursday that it will prohibit fruit, candy, mint and dessert flavors from small, cartridge-based e-cigarettes favored by high school and middle school students. But menthol and tobacco-flavored e-cigarettes will be allowed to remain on the market.

Together, the two exemptions represent a significant retreat from President Donald Trump’s original plan announced four months ago, which would have banned all vaping flavors — including menthol — from all types of e-cigarettes. The new policy will spare a significant portion of the multibillion-dollar vaping market. And the changes mark a major victory for thousands of vape shop owners who sell the tank-based systems, which allow users to mix customized nicotine flavors.

The association and other health groups argue that teenagers who vape will simply shift to using menthol if it remains on the market.

E-cigarettes are battery-powered devices that typically heat a flavored nicotine solution into an inhalable aerosol. They have been pitched to adults as a less-harmful alternative to traditional cigarettes, but there is limited data on their ability to help smokers quit.

The Food and Drug Administration has struggled for years to find the appropriate approach to regulate vaping. No e-cigarettes have yet won FDA approval, but the agency permits their sale under a policy called “enforcement discretion.” Under Thursday’s policy change, the FDA said it would begin targeting companies that continue to sell the targeted products. Companies will have 30 days after the policy is published to halt manufacturing, sales and shipping.

“We have to protect our families,” Trump told reporters on Tuesday, ahead of the announcement. “At the same time, it’s a big industry. We want to protect the industry.”

The flavor restrictions apply to e-cigarettes that use prefilled nicotine cartridges mainly sold at gas stations and convenience stores. Juul Labs is the biggest player in that market, but it previously pulled all of its flavors except menthol and tobacco after coming under intense political scrutiny. The small, discrete devices are the most popular brand among underage users.

The flavor restrictions won’t affect the larger specialty devices sold at vape shops, which typically don’t admit customers under 21. These tank-based systems allow users to fill the device with the flavor of their choice. Sales of these devices represent an estimated 40% of the U.S. vaping business, with sales across some 15,000 to 19,000 shops.

The new policy still represents the federal government’s biggest step yet to combat a surge in teen vaping that officials fear is hooking a generation of young people on nicotine. In the latest government survey, more than 1 in 4 high school students reported using e-cigarettes in the previous month. Late last month Trump signed a law raising the minimum age to purchase all tobacco and vaping products from 18 to 21 nationwide.

Health and Human Services Secretary Alex Azar said the administration decided to exempt menthol after reviewing new data showing the flavor was not popular with teens.

“As we got better data on the flavors, we modified our thinking,” Azar said.

Survey data published in November reported that less than 6% of teens picked menthol as their top choice for vaping. In contrast, mint was the most popular flavor among sophomores and seniors.

Incoming FDA Commissioner Stephen Hahn said the government’s approach attempts to balance the problem of underage vaping with “the potential role that e-cigarettes may play in helping adult smokers transition completely away” from regular cigarettes.

When Trump officials first sketched out their plans at a White House event in September, they specifically said menthol would be banned. But that effort stalled after vaping proponents and lobbyists pushed back and White House advisers told Trump that a total flavor ban could cost him votes.

Industry groups including the Vapor Technology Association launched an aggressive social media campaign — #IVapeIVote — contending that the plan would force the closure of vaping shops, eliminating jobs and sending users of e-cigarettes back to traditional smokes.

Trump’s initial announcement came amid an outbreak of unexplained lung illnesses tied to vaping. But since then, health officials have tied the vast majority of the cases to a contaminating filler added to illicit THC vaping liquids. THC is the chemical in marijuana that makes users feel high. Makers of legal nicotine-based vaping products have tried to distance themselves from the problem.

FDA officials said Thursday they will continue targeting vaping products that appeal to underage users in other ways, such as packaging that mimics juice boxes, cereal or kid-friendly snacks.

Administration officials also pledged to work with the industry ahead of a looming deadline that manufacturers say threatens their products. The FDA is scheduled to begin reviewing all e-cigarettes in May. Only those that can demonstrate a benefit for U.S. public health will be permitted to stay on the market.

Officials noted that products submitted by the deadline that don’t appeal to kids will be permitted to remain on the market for up to one year pending FDA review. They also clarified that some vape flavors could return to the market if they can win FDA approval.

Trump suggested ahead of the announcement that the flavor restrictions might be temporary.

“Hopefully, if everything’s safe, they’re going to be going very quickly back onto the market,” he told reporters at his Mar-a-Lago resort in Florida.