Early in his career, Dr. Siva Nalabotu saw the need for a place where pets could get veterinary care for sudden illnesses or injuries without going to an emergency hospital.

After all, pet owners can’t predict when their furry companions might require medical care, but traditional vet offices can’t always see animals without an appointment.

Nalabotu opened his first VetCheck clinic in 2018 in Fishers (14069 Mundy Drive) and his second in Carmel (1374 S. Rangeline Road) in 2021. The company is now using a franchise model in an effort to go nationwide.

Another 30 VetCheck franchises are in early-stage development. And the company is working to raise $100 million from investors to fund the opening of what it hopes will be 250 urgent care centers throughout the country within five years. VetCheck has raised $50 million already.

Company leaders hope to eventually have one VetCheck center for every 30 traditional veterinary offices in any given area.

“I was thinking about, what we can do to expand this type of care across the country?” Nalabotu told IBJ. “That’s when I thought of franchising, where investors who have investment options can go open their own hospital.”

Unlike traditional vet offices that operate on appointments during business hours, VetCheck is open most days from 9 a.m. to 11 p.m. in Fishers and 4-11 p.m. in Carmel, with longer hours on the weekends. The care centers allow owners to walk in with their pets for exams, vaccinations and care for more serious ailments.

VetCheck also has relationships with general practitioners and 24-hour emergency hospitals who can refer pet owners to the urgent care center if an appointment is not available or wait times are excessive.

While VetCheck officials declined to provide specifics on pricing, they said the cost of care generally falls between that of a general practitioner and an emergency vet.

“If you have a dog that needs last-minute vaccines, you can walk in the door and get the vaccines taken care of, and we send the records to their regular vet,” Nalabotu said. “In that way, there is a continuity of care.”

Lawrence Bowlin, VetCheck’s chief operations officer, said people travel to the Fishers office from two or three counties away. That’s demonstrated the need for more offices both in Indiana and around the country.

“We do not intend to take away the patient” from traditional offices, Nalabotu said. “Our goal is to complement other teams of hospitals or other teams of veterinarians by providing care when they need it most. It will reduce the stress on the pet parent and reduce the wait time for the pet.”

Nalabotu’s path to starting VetCheck began during his childhood in rural India where he developed a love of animals.

In fourth grade, he decided he wanted to go to medical school. He later received an opportunity to go to a private college for medicine. His potential paths included veterinary and dental school.

“I thought with my childhood being around animals, I wanted to get into vet school so I could help people with pets and farm animals,” he said.

Nalabotu, 38, moved to the United States in 2008 and earned a master’s degree in biological sciences and a doctorate in toxicology from Marshall University in Huntington, West Virginia.

He received a veterinary license and practiced at Banfield Pet Hospital in Fort Wayne from 2012 to 2015.

Along the way, he identified a gap in care options for pets and began planning VetCheck in 2016.

“There is an emergency hospital that is like a regular hospital, but there is no care in the middle where they can walk in the door and get small things taken care of,” he said. “Either you had to wait for your vet to open or you had to go to the regular emergency room for hours and hours, which is not convenient for the pet parent.”

While urgent care centers for humans have existed since the 1970s, VetCheck is among a few companies now pioneering the concept for animals.

“This is an interesting new area,” said Jim Weisman, assistant dean for clinical education at Purdue University’s College of Veterinary Medicine. “I do think they’re going to serve a pretty important need across the industry.”

Bond Vet opened its first clinic in 2019 in Brooklyn, New York, and now has 34 locations on the East Coast with more in the planning stages.

Still, the newness of the urgent care concept means education will be key, Weisman said. Pet owners must learn whether to visit a primary care provider, urgent care center or emergency care vet. They’ll be the “first-line judge” of what level of care their pet requires, and urgent care centers will need to have well-trained staff who can help determine on the phone which place the pet should go, Weisman said.

Nalabotu said VetCheck is partnering with veterinary schools at Purdue, the University of Florida, University of Georgia and Kansas State University to cultivate students interested in veterinary practice and with entrepreneurship skills they can use to run their own urgent care centers.

The Carmel and Fishers VetCheck locations each have about 50 employees working various shifts. Each center has four to five technicians per veterinarian per shift, where some hospitals have only one or two, according to Nalabotu.

Nalabotu said the national veterinary employee shortage is the biggest challenge the company faces, but he said employees appreciate the VetCheck model, in part because they do not work 12- to 15-hour shifts like those at an emergency vet center. 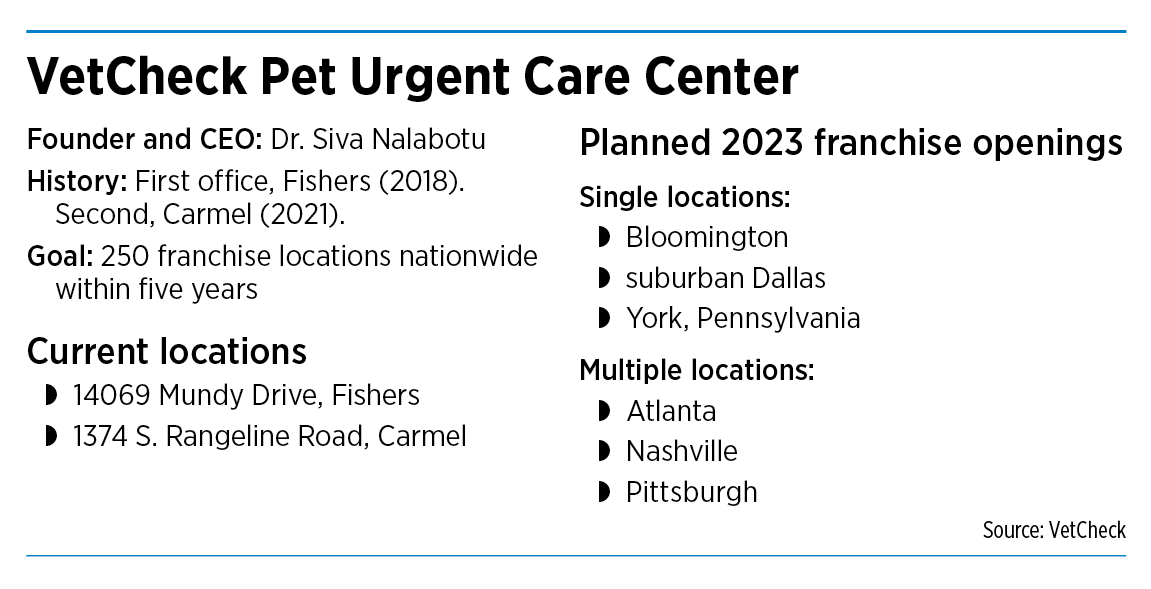 VetCheck’s initial expansion targets are primarily in the Midwest and Southeast, plus Colorado and Texas. Next up will be the South, Southwest and Northwest.

“Support from the community is the driving force for us to think about expansion,” Nalabotu said.

Once VetCheck hits the 250-office goal in the United States, it plans to begin looking to expand in Canada and Europe. The company’s leadership has started taking a more aggressive approach in its outreach, according to Bowlin, the company’s chief operating officer.

The startup cost for a clinic depends on location, but Bowlin said it should be $700,000 to $800,000 for those outside California or New York. Franchisees will get full business operations and development marketing teams to help get the clinics off the ground, he added.

“We’ve started to see an increase in traffic of people interested in franchising,” Bowlin said. “That, along with our development fund, has really created a much more robust reaction to what we’re trying to do.”

In 2020, as pet ownership ballooned across the country during the early days of the pandemic, pet owners spent nearly $100 billion on their animals, with $30 billion of that spent on medical care, according to a report from the American Veterinary Medical Association.

Bowlin anticipates the industry will reach $200 billion in annual spending by 2030. That makes for a bullish future for VetCheck, whose Hamilton County locations have 35% to 40% profit margins, he said.

“The urgent model of this is what really drives it, and that’s what people look at, because the growth rate expected in veterinary medicine is going to be huge over the next eight to 10 years,” Bowlin said.

Experts are predicting an economic downturn in 2023, but Nalabotu said that, while veterinary care is not recession-proof, he believes his company is prepared for whatever happens.

“Pet care is always necessary, but there will be some challenges that we will face, and we are prepared to face those challenges as well,” he said. “We are bracing for that impact.”•