With 125 Indiana Statehouse races on ballots across the state this year, only 10 seats don’t have incumbents seeking reelection.

Just two of the 25 Senate seats up for election this year are open, with Democratic Sen. Mark Stoops of Bloomington retiring and Republican Sen. Victoria Spartz of Noblesville running for the 5th Congressional District instead of seeking reelection.

Eight House seats are open, and most have contested primary races on at least one side of the ticket.

Here is a look at who is running in five open legislative races that are worth watching. All campaign finance figures are based on pre-primary reports, which were due May 15. 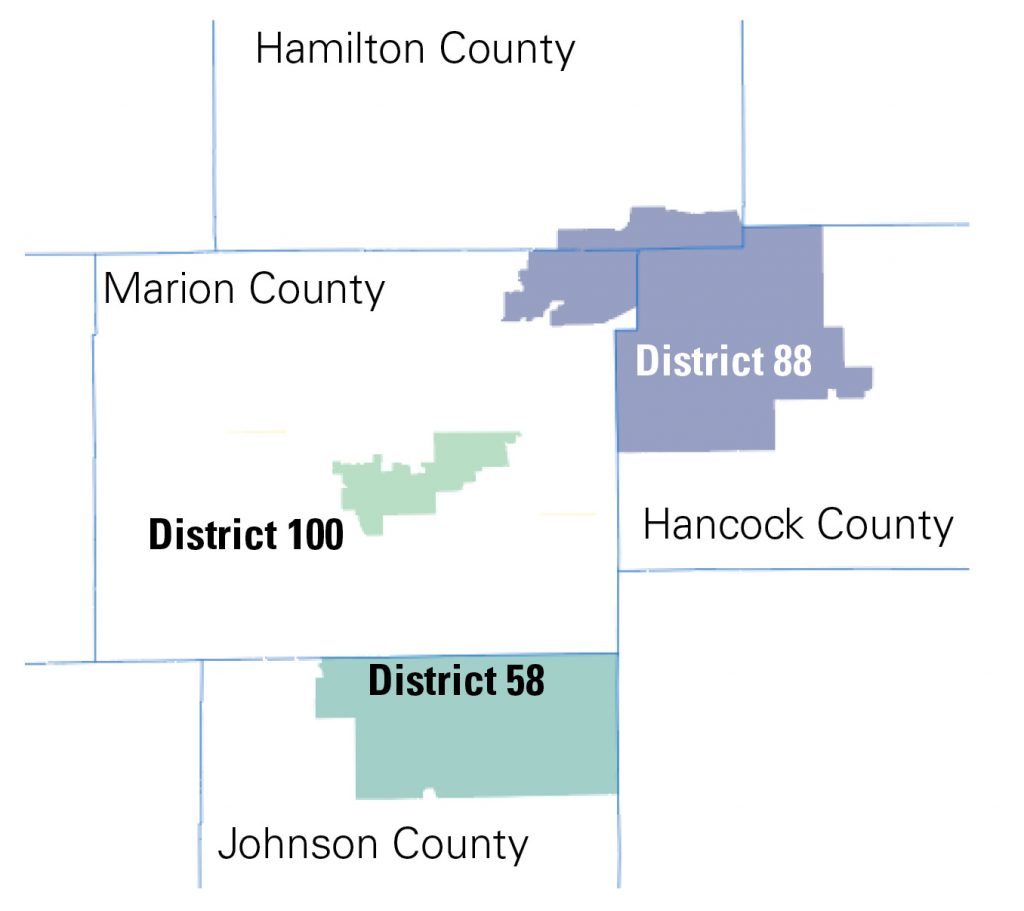 This safe Democratic seat opened up when state Rep. Dan Forestal, decided not to seek reelection this year after facing charges of drunken driving and impersonating a public servant. When Forestal announced his decision, he said he needed to focus on his mental health.

Forestal has represented the east side of Indianapolis at the Statehouse since 2012.

Johnson, who was re-elected to a second term on the Indianapolis City-County Council in 2019, jumped into the race minutes after Forestal’s announcement in February.

Johnson said his whole life, since the time he was young and his grandparents made him greet people at the door for church, has been about making people feel welcome.

“At the end of the day, I fell in love with this city when I was a kid,” said Johnson, who is originally from Daleville. “And finding ways to make it better has always kind of been a motivation for me.”

He said he wants to find ways to work with lawmakers of both parties at the Statehouse to help improve Indianapolis, but do that without taking away local control. During the 2020 legislative session, the Republican-controlled General Assembly attempted to preempt Indianapolis officials on multiple issues, including landlord-tenant rights and public transit.

“This is about relationship building,” Johnson said. “I don’t think it’s going to be easy to do that in the Statehouse … but I’m ready and I’m willing.”

Johnson said he would focus on ensuring all kids have access to quality education (he worked for Complete College America for more than five years), increasing the minimum wage, workforce talent attraction and strengthening the hate crimes legislation.

Marsiglio is new to politics, but he said he’s been more involved in the community for the past five or six years, including being a part of the Citizens Alliance For Public Safety.

He said he wants to be a part of the solution to the city’s problems, as opposed to only complaining, and believes public safety is a top issue that needs to be addressed.

“There needs to be reset somewhere,” Marsiglio said. “Let’s all work together.”

He said he wants to see more decisions made based on evidence and data, which is what he’s focused on as a senior management analyst at IUPUI. He would also prioritize education and health care matters.

“I’m here to be an advocate for the city,” Marsiglio said. “I want to see the east side to be heard.”

This district hasn’t had an open race in decades, as Republican Brian Bosma served as a state lawmaker for 34 years. Bosma, who also had served as speaker of the House until stepping down from that role earlier this year, announced his retirement in November.

Now, two Fishers Republicans have lined up to try to represent the district, which includes portions of Marion, Hancock and Hamilton counties. Neither candidate has run for office before.

Leah McGrath, who formerly served as deputy mayor of Fishers before taking a job at Knowledge Services earlier this year, has the support of multiple elected officials in Hamilton County and has received donations from the political committees for the Indiana Chamber of Commerce and the Indy Chamber.

She said her experience in the public and private sectors has given her the skills to help state government operate more efficiently. State lawmakers will draft the next two-year budget during the 2021 session, and the pandemic has already caused a significant drop in tax revenue.

“As revenue goes down we’re going to have to be very creative in how we respond,” McGrath said. “I’m well positioned to be effective from day one.”

McGrath described herself as “someone you can count on.”

Chris Jeter, a corporate and estate lawyer at Massillamany Jeter & Carson LLP, said he’s running because he felt compelled to offer a fresh perspective on issues at the Statehouse.

Jeter is a Fishers native, served seven years of active duty in the U.S. Navy and remains a Navy Reserve officer. Before starting his own law firm in 2015, he worked as an associate attorney at Barnes & Thornburg LLP.

He said he wants the government to be more responsive to the public and to protect personal freedoms.

“I don’t particularly come in with a long list of items that I have to accomplish,” Jeter said. “I just want to protect taxpayers and look out for people like me.”

He said he thinks voters are interested in having a government outsider represent them to break the cycle of the same types of politicians being elected to office.

The race to replace longtime Republican state Rep. Woody Burton in the Johnson County district has attracted five candidates who range from having no political experience to a career spent in the public sector.

And the race has turned negative, with candidates lodging personal attacks and arguing over how Greenwood has used tax increment financing.

Greenwood City Councilor David Hopper, who is also director of local health department outreach with the Indiana State Department of Health, said he supports the city’s use of TIF money for quality-of-life projects.

But Bruce Armstrong, who served on the council for 16 years before losing in the 2019 GOP primary, said the city has stretched the intent of TIF districts and the use of the money they generate. He also is opposed to how tax abatements can be used for speculative buildings.

“I am not anti-TIF or anti-tax abatement,” Armstrong said. “They just need to be used appropriately.”

Jay Hart, who repairs and restores vintage motorcycles for a living and unsuccessfully ran for Greenwood City Council last year, said TIFs can be a “slush fund” for mayors, but he’s not opposed to using the financing tool.

Heather Bline, a legal assistant for Cincinnati Insurance Companies, has never run for office before, but she said she’s always been interested in politics. She said her top issues are dealing with drug issues, health care and education.

“There are way too many people at every level that get into politics just for the title,” Bline said. “That’s not what I want to do. I want to make a change.”

Michelle Davis, who is another political newcomer in the race, has raised the most money—$31,500—but her campaign lists nearly $17,000 in debt.

Hopper, who raised the second highest amount, has the backing of Greenwood Mayor Mark Myers, and most of his fundraising—$22,000—came from Myers’ campaign account.

Hopper said his experience with city and state government—he has also worked in the Lieutenant Governor’s office and Secretary of State’s Office—makes him the most qualified for the seat.

“I can’t be bought,” Hart said. “I’m not looking for a career in politics.” 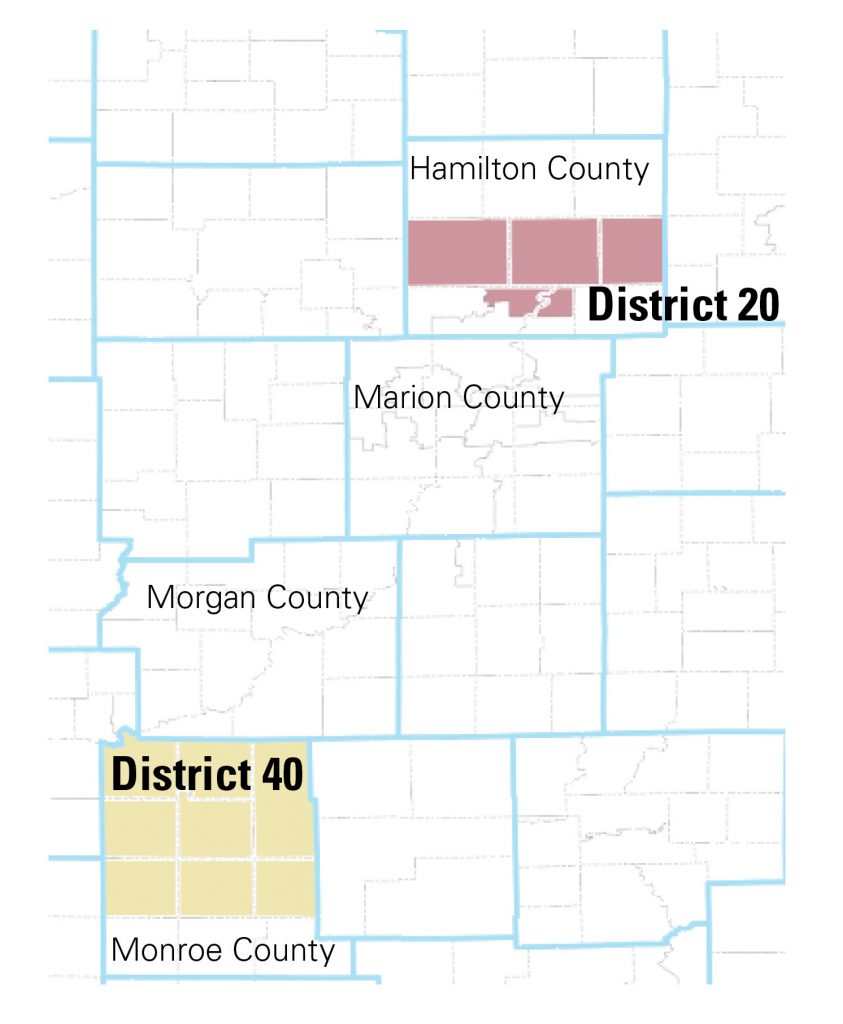 Senate District 20 is up for grabs again, as Republican Sen. Victoria Spartz decided to run for Congress this year instead of seeking re-election. Spartz was elected to the Statehouse in a hotly contested GOP caucus in 2017 after longtime Sen. Luke Kenley retired from the seat.

And the race appears to be intense again. The amount of cash raised and spent in the race is more like the investment in a congressional seat than a Statehouse seat, with both candidates posting six-figure numbers.

Both candidates have also invested in TV advertisements.

Scott Baldwin, who has a background in law enforcement and real estate, has some experience running for office. In 2010, he ran for Hamilton County sheriff but lost in the Republican primary.

He said he’s running for the Senate seat because he wants to make sure Hamilton County continues to thrive.

His real estate company, Envoy Inc., has been involved in several big multi-use projects, such as the Edge development in downtown Fishers.

“I’ve got some first hand knowledge of the challenges businesses face, especially small businesses,” Baldwin said. “I want to bring that level of experience, which I think is unique, to the state Senate.”

He has the backing of a handful of elected officials in Hamilton County, including Fishers Mayor Scott Fadness and Noblesville Mayor Chris Jensen. But a good portion of his fundraising has come from his own pockets—he has loaned the campaign more than $116,000.

JR Gaylor, who has been with the Associated Builders and Contractors of Indiana and Kentucky for 30 years, said he thought now was the time to take a stand on issues so that’s why he’s running for office.

“I think I can bring a lot of knowledge to the position,” Gaylor said.

He said he’s focused on three issues—bringing free enterprise principles to areas such as health care and education, defending personal liberties like the Second Amendment and property rights, and protecting the most vulnerable, such as the unborn, disadvantaged children, people with addiction problems and the elderly.

Gaylor has never run for office before. He has given his campaign $15,000.

“I don’t want to make this a career,” Gaylor said. Voters “can feel assured that I’m not beholden to anyone.”

Retiring Democratic state Sen. Mark Stoops has represented this district since 2012, and the seat is considered safe for Democrats.

The district is outside of the Indianapolis area, but is worthy of attention because Indiana Democratic Party Chairman John Zody is running and he’s in a tough race against Shelli Yoder, who is a former Monroe County Councilor and congressional candidate.

Yoder significantly out-raised Zody, bringing in more than $91,000 since Jan. 1, while Zody has only raised about $39,000, which includes more than $20,000 that was raised before the start of the year.

Yoder has several well-known donors on her side, including Carmel philanthropist Deb Simon, former Indiana congresswoman Jill Long Thompson and Laurie McRobbie, who is married to the Indiana University president.

Zody has received some national support though, with a $150 contribution from Democratic National Committee Chairman Tom Perez.