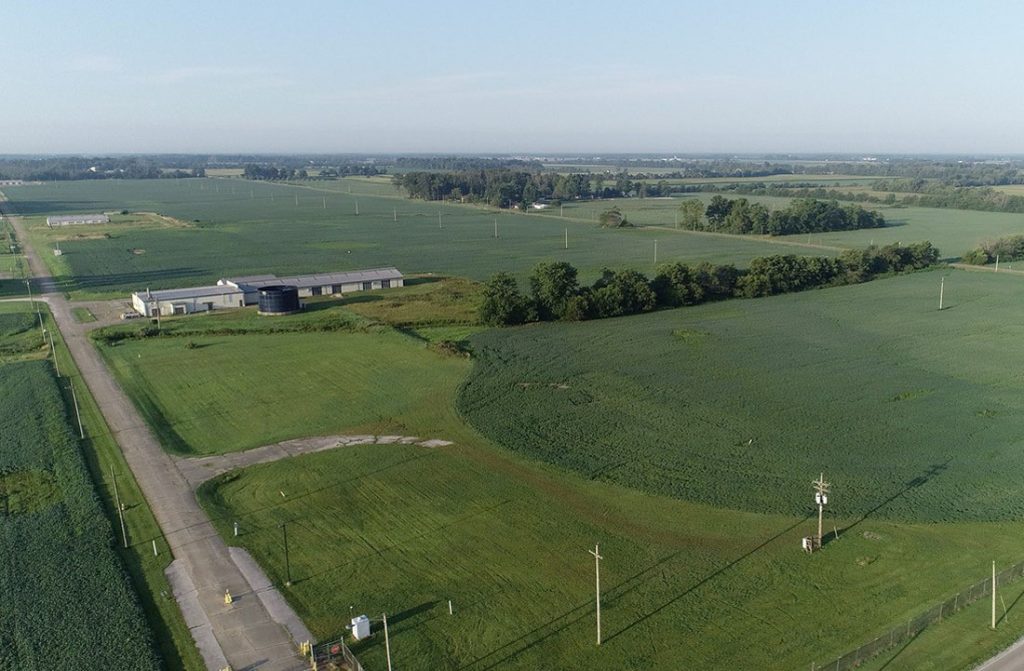 The majority of land up for auction is being used for agricultural purposes. (Image courtesy of Schrader Real Estate and Auction Co.)

Nearly 1,200 acres of Hancock County land owned by Greenfield-based Elanco Animal Health is expected to be auctioned off in March, including a set of contiguous parcels that together equal one square mile.

The land for sale, located south of U.S. 40 and on either side of Meridian Road near Greenfield, totals 1,172 acres across 24 tracts. About 900 acres is currently used for farming on a contract basis, while other parcels include small commercial and industrial buildings.

The land formerly was owned by Eli Lilly and Co. and was included in Elanco’s 2018 spin-off from the pharmaceutical company. But Elanco has little use for the property, which is immediately southwest of Greenfield.

“The current owner determined this property doesn’t fit with their needs, so they decided to sell it at auction,” R.D. Schrader, president of Schrader Real Estate and Auction Co., said in media release.

Steve Slonaker, a real estate and auction broker at Schrader, told IBJ the company plans to market the land to farmers, investors, specialty buyers and an array of developers.

Bidders will have the opportunity to buy individual tracts or combine sections that interest them. One natural combination would be a collection of 10 tracts comprising one square mile of land.

Those tracts are bounded by Davis Road to the north, Franklin Road to the east, Meridian Road to the west and East 200 South to the south. It’s about the same size downtown Indianapolis’ Mile Square, as bounded by North, East, South and West streets.

The smallest parcels up for purchase are a pair of 2.5-acre tracts just south of U.S. 40, along Meridian Road.

While some of the land might be acquired  for commercial development—particularly the tracts near U.S. 40—it’s likely most of the land will remain agricultural, said Ross Reller, a land broker with Indianapolis-based Resource Commercial Real Estate.

“The reality is most of that land is likely going to continue being exactly what it’s being used for now,” he said. “Some of it may be developed, but most won’t.”

While the official marketing effort for the land does not begin until early February, there has already been “an outstanding amount of interest” in the property, Slonaker said.

“There’s so many potential uses for this property,” he said. “I think a good part of this might continue (as agricultural) for a good while, but there are tracts that could be used right now for development of commercial, industrial or residential properties.”

Elanco did not return a call from IBJ requesting comment.