Legislators are preparing to punt on 2009’s “must-solve” business issue in the hope of a federal bailout.
However, it’s anybody’s guess how Washington will respond.

Business leaders howled
last spring when the General Assembly passed, and Gov. Mitch Daniels signed, a bill
increasing the wage base and rate on payroll taxes to shore up the insolvent Indiana Unemployment
Insurance Trust Fund.

In 2010, expect another round in the trust fight.
Senate Republicans already have announced their intention to push the bill’s
inception back a year.

“The roughly $250
million or slightly more we’d raise with premium increases this year would have a very small impact
on a deficit that will rise to $3 billion,” said Sen. Brandt Hershman, R-Wheatfield,
and chairman of the Senate Tax and Fiscal Policy Committee. “The best thing we could
do for businesses is delay implementation until we have a better picture of what the federal government
will do and get a better handle on what economic conditions will be like.”

“You can’t just
walk away from a decision you planned and spent a great amount of time working on,”
said State Rep. David Niezgodski, D-South Bend, and chairman of the House Labor
and Employment Committee. “I do not foresee reopening [House Enrolled Act]
1379.”

It took a decade for Indiana to get
into the mess. Current projections anticipate taking even longer to get out.

Back in 2000, the trust, which pays temporary benefits to the jobless, had a positive $1.6
billion balance. But Indiana has spent more than it drew in taxes every year since. As a result, the
trust went into the red last year and began borrowing from Uncle Sam. Indiana opened 2009 about
$371 million in arrears.

The deep recession only
made the problem worse. With state unemployment pushing 10 percent, Indiana expects its trust to close
2009 with $1.7 billion in debt. By the end of next year, the total is projected to
approach $3 billion.

According to the Indiana
Department of Workforce Development, the trust won’t break even again until at least 2014. And
its debt won’t be retired until 2022.

Indiana
is far from alone in its predicament. As of Dec. 2, the U.S. Department of Labor reported half
of all states had begun borrowing from the federal government because their unemployment systems were out of
cash. Indiana is one of eight states with debts already over $1 billion. California leads the way with $5.1 billion. Michigan’s
debt tops $2.9 billion and Ohio’s stands at $1.6 billion.

Problem
is, the federal system is broke, too. Doug Holmes, president of the Washington, D.C.-based business
advocate UWC: Strategic Services on Unemployment & Workers Compensation, points out as many as 40
states will borrow next year, and their total unemployment insurance debt will top $90 billion by 2012.

To fund its unemployment insurance reserve, the federal government charges
its own payroll tax on top of states’. It has levied 6.2 percent of every
employee’s first $7,000 in wages, Holmes said, but the feds kick back up to 5.4 percent
in credits to states in good standing.

The big question is whether
the Obama administration will begin rescinding those credits—thus hiking taxes
on employers—or hypothetically forgive some or all states’ debts.

So states are hedging their bets and waiting to boost taxes to eliminate their debts. 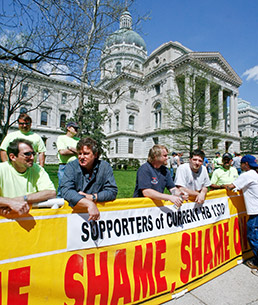 Union carpenters in April protested at the Statehouse about cuts in jobless benefits. (Associated
Press photo)
“There’s an analysis
of risk and competitiveness being done all over the country right now,” Holmes
said. “They’re all trying to deal with a situation where you don’t want to increase
taxes on employment in 2010 and 2011 to the degree that you jeopardize hiring new employees. But you
also don’t want to have so much debt that you can’t eventually overcome it before the next
recession.”

That’s exactly what led Hershman
to propose delaying implementation of the bill Indiana passed last year. He said it’s impossible
to tell right now what will emerge at the national level. The spectrum of possibilities
spans the political divide, he said. On one end, there’s the chance Obama
could nationalize the system, mutualizing the problem across 50 states, which might benefit manufacturing-heavy
Rust Belt states like Indiana.

On the other end, the unemployment system
could be overhauled entirely and made the responsibility of individuals, with their
own personal insurance accounts built up over every employee’s working life.

“There will come a point in which we’ll have to right the
system. But there may be significant federal action that gives us a clearer picture on
our options for doing so,” Hershman said. “[Until then], for better or worse, one of the
tools the federal government has available to it is the ability to deficit spend, which is something
the state of Indiana doesn’t have ability to do.”

But Niezgodski
worries Uncle Sam may run out of patience for states that make no attempt to slow the
pace they’re adding unemployment insurance debt.

“This
is not just, ‘Don’t worry, the federal government will bail us out.’ We’ve got to help
ourselves,” Niezgodski said. “At some point, if the federal government says, ‘This is what we’re going
to do to begin this process … we cannot put ourselves in a position to not receive the greatest aid if aid is to come.

“What I’m most concerned about is doing nothing.”•