Plews Shadley Racher & Braun LLP is a niche firm with a burgeoning environmental law practice. But the partners are
gaining real estate expertise, too.

They’ve gleaned the knowledge by amassing four properties in the past
15 years along North Delaware Street, in the Old Northside Historic District, to create a campus-like atmosphere for the firm’s
38 lawyers.

The latest addition to the collection is what’s known as the Eden-Talbott House, an imposing
residence built just six years after the Civil War and about the same time as the home down the street occupied by former
President Benjamin Harrison. 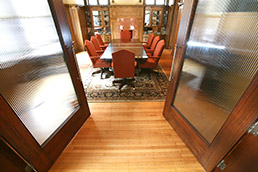 Grandeur of the 1871-vintage house was carefully considered while making space for meetings and offices. (IBJ Photos/
Perry Reichanadter) 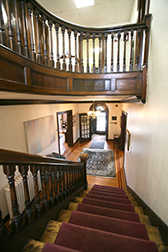 Plews Shadley purchased the Eden-Talbott home early last year and finished renovating
it in August, fortifying the firm’s commitment to the neighborhood.

“It’s
just a beautiful building,” said Paul DePrez, a director of the Old Northside Neighborhood Association.
“It’s wonderful to have it preserved and hopefully not desecrated.”

The
firm’s holdings include two other historic homes and a more modern, two-story building inspired
by the designs of Frank Lloyd Wright that might be regarded as the misfit of the lot.

At any rate, Plews Shadley’s
founders pledged more than 20 years ago to establish roots in the venerable neighborhood, replete with
towering trees and spacious lawns, and forgo traditional downtown office space.

“It’s
a little eclectic, some say eccentric,” said Chris Braun, who arrived at the firm in 1994. “But it adds a whole
richness to the practice you wouldn’t get at a high-rise.”

Founders George Plews and Sue Shadley, along with George Pendygraft, who is no longer with the firm, hung
their shingle in 1988 in space they rented north of the Eden-Talbott House.

That first location, a home built
in 1916 for a descendant of L.S. Ayres, the founder of the department store chain that for decades bore his name, still serves
the firm well.

Plews Shadley bought the house, and another across the street, in 1994. Both have more than 7,000
square feet. But they’re no match for the grand architecture of the Eden-Talbott House.

The
three-story, 8,000-square-foot home built in 1871 is the most impressive of Plews Shadley’s four properties.

Charlton Eden, a prominent Indianapolis builder in the late 19th century, is responsible for the home’s elegant façade
and ornate interior work. He added the front portion, built in Italianate and Second Empire styles, in 1878.

The house features a central tower with a carved stone balcony on the second floor, and elaborate limestone moldings flank
the tower and its large windows.

Black walnut, now scarce in Indiana, was used extensively in the ornate arches
and carved lions’ heads found throughout the home.

The 800-piece staircase newel post was displayed in
1876 at the Philadelphia Centennial Exposition, the first official World’s Fair in the United States.

In
1891, the home was purchased by Henry Morrison Talbott, who, with a business partner, controlled the top opera houses and
theaters in the city, including the English Opera House on Monument Circle.

After Talbott’s death in 1929,
the property changed hands several times and was used by the International Order of Odd Fellows for many years.

In 1979, the Historic Landmarks Foundation of Indiana and the Junior League of Indianapolis purchased the home in an effort
to spur revitalization of the Old Northside. A few years later, the National Federation of Music Clubs bought the house to
serve as its headquarters.

The organization occupied the home until deciding it no longer needed so much space
and sold it to Plews Shadley for $500,000. The firm spent roughly the same amount on renovations.

Plews Shadley converted a front area into a large conference room, and the space across
the hall, originally a parlor, into an office for Braun. He said the addition of the large conference room is “huge”
for the firm because the other three buildings couldn’t accommodate such large meeting space.

Firm leaders
opted to replace eight original doors as tall as 14 feet with shorter doors. They sought out a craftsman from Canada to hand-carve
and stain the smaller models to match the woodwork. They also had transoms installed above the entries to compensate for the
shorter doors and to let more light into the rooms.

“We were trying to capture the old English barrister
feel from the late 1800s,” Braun said. 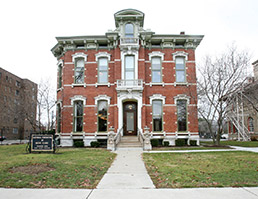 The Eden-Talbott house is one of four buildings on Plews Shadley Racher & Braun’s campus in the Old Northside
neighborhood. (IBJ Photo/ Perry Reichanadter)

The kitchen is updated with granite countertops and an island featuring
a built-in oven, and the dining room has been converted into a small conference room.

The home houses six lawyers,
two legal secretaries and a paralegal, some of whom work on the second floor.

The third level, once servant quarters,
is vacant should the firm add attorneys.

Outside, a large brick archway still stands next to the north side
of the house, the last piece left from a shelter that would protect visitors arriving by horse-drawn carriage from the elements.

Clients enjoy it, too

The former Ayres home to the north measures 7,800 square feet and houses 14 lawyers.
In the 1940s, the home served for a couple of years as the first Indiana University law school in Indianapolis.

Ten lawyers practice in the home across the street, and nine more are next door in the office building.

Plews
Shadley lawyers enjoy practicing in the unconventional space, said Shadley, a founder of the firm.

But the vintage
features have much broader appeal.

“We’ve never thought the advantage of getting everybody in one
building was worth it,” she said. “We have found that it works very well for us, and for clients.”•