No incentive can make a bad deal bankable. But President Obama’s stimulus measures are spurring some promising small
businesses to begin borrowing again, despite the recession.

National politics will help determine whether the budding trend accelerates or stalls.

“The president has announced a very exciting series of initiatives. That’s the good news,” said attorney
Frank Swain, a partner in Baker and Daniels LLP’s Washington, D.C., office. “The asterisk to bear in mind is,
nearly everything the president has proposed will require legislation.”

Obama has a variety of incentives on the table designed to encourage entrepreneurship. For starters,
he wants to move $30 billion from the Troubled Asset Relief Program, or TARP, over to community banks that will put it to
work in small businesses.

The president also aims to give the Small Business Administration authority to refinance commercial real estate loans for
owner-occupied property. Obama has proposed raising the caps on a variety of SBA loans, and he wants Congress to approve a
$5,000 tax credit for every net new employee a small business hires.

But at the moment, it’s unclear whether Obama will even be able to preserve the small-business banking measures he’s
already added to the books. Thanks to the American Recovery and Reinvestment Act, the SBA is attempting to rekindle borrowing
activity by increasing its loan guarantees up to 90 percent and waiving fees.

The SBA’s current loan incentives are scheduled to expire at the end of the month without congressional renewal. Some
local entrepreneurs are taking advantage of federal stimulus incentives while they last. 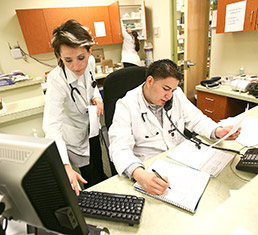 An SBA-backed loan has helped fund the growth of Alivio Medical Center on the east side. (IBJ Photo/ Perry Reichanadter)

Alivio Medical Center, at 21st Street and Shadeland Avenue, is exactly the type of small business President Obama is attempting
to assist. Founded in 2002, it has four full-time physicians, three specialists and a staff of 30. It serves 25,000 patients,
primarily Hispanic people for whom Spanish is their first language.

Dr. Alfredo Lopez-Yunez, 42, a Colombian native who’s Alivio’s owner and director, said he probably could have
secured a loan without the SBA’s assistance. But because of its involvement, Alivio used funds that would have gone
for fees to instead open a dental clinic and an ophthalmology clinic.

“I wouldn’t say it was a no-brainer, but it was close to that, it was so good,” he said. 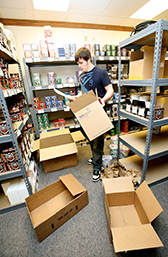 McCordsville-based Grassroots LLC is another beneficiary of the SBA’s current incentives. Owner Todd Stadler distributes
a variety of musical instruments from a tiny 3,000-square-foot warehouse, “but we use every bit of that room,”
he said. He launched the business in October with the help of an $80,000 loan from Star Financial Bank, backed by the SBA.
His motive was a common one for entrepreneurs: Stadler, 33, simply wanted to work for himself.

Grassroots has four full-time employees and two part-timers. In just a few months, it has attracted 250 customers and aspires
to 2010 sales of $1 million, with a profit margin of 25 percent or better.

“I’ve worked hard for others. I knew I’d succeed if I did that for myself,” he said. “My mind-set
was, I’ll do whatever I have to to make this work.”

The SBA’s changes were rooted in necessity. In 2008, wary entrepreneurs battened down their hatches. The international
credit crunch trickled down locally into a 35-percent slide in both the quantity and size of SBA-backed bank loans.

The result was a partial, concentrated revival. The SBA’s Indiana District Office reports that its gross dollar totals
for loans made during the last 12 months reached 86 percent of their pre-recession level. But the SBA underwrote only about
half as many loans as before the downturn.

Just before Christmas, Schroeder was one of 12 community bankers from around the country invited to meet personally with
Obama. He told the president that German American was fortunate to be well-capitalized and willing to lend. But because of
the recession, he told Obama, businesses simply aren’t borrowing. For the last two years, most have concentrated on
reducing their inventories and tightening their receivables, not taking on debt for expansion.

As businesses shrink, Schroeder noted, they have less collateral to offer as loan security. That increases their default
risk. Until recently, the problem has been hidden by the lack of loan demand. But it will become pronounced as they begin
growing, and seek new credit for working capital.

Schroeder believes the SBA’s increased guarantees ought to be extended through 2011, and perhaps beyond.

“That was my point to the president,” he said. “If you pull that SBA credit-enhancement support off the
table too soon, just when this economy is ready to come back up and back out, that’s when you’re going to see
the credit crunch.”

“Chances are that many, if not all, the changes will be made pretty quickly,” said Swain, who served as the SBA’s
chief counsel for advocacy before joining Baker and Daniels. “If somebody desperately needs help today, they have to
deal with current program rules. But in a month, the rules could be changed.”•