This week, canines at Clowes, sisters in the suburbs, pals searching for Paul, and the Cabaret’s new digs at the Columbia
Club.
__________

Most grown-ups, being wise, make expectation adjustments when they go to children’s theater. The primary goal of these
events, they figure, is to entertain the young ones, and if some moments of grown-up pleasure happen, well, that’s a
bonus. 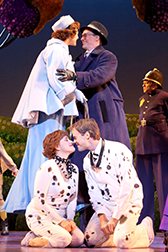 The humans
tower above the pets—thanks to stilted costumes—in the national tour of “The 101 Dalmations Musical.”
Real dogs do make brief, but memorable, appearances. (Photo/Joan Marcus)

It is possible, of course, for children’s theater to transcend to a blissful spot where adults enjoy a show just as
much as kids do. From “Annie” to “The Lion King” and beyond, the potential is always there that creative
folks will win out over the purely business-minded and create something of greater value than the next Kid-TV-Show-Live! arena
extravaganza.

Clearly, some effort was made to raise “The 101 Dalmatians Musical” into those ranks. The show, whose national
tour stopped at Clowes Hall March 9-14, hired Broadway pro Jerry Zaks to direct, commissioned Dennis DeYoung of Styx fame
to compose the score, and hired an established, talented core for the cast. They’ve also figured out ways to punctuate
the show with actual dogs (even if necessity calls for the title pooches to be played by humans, puppets and cut-outs most
of the time).
They’ve also gone to a lot of trouble to construct stilted costumes for the humans so they tower above the actors-playing-dogs.

The problem is that no convincing case is made that this show has any business being a musical, let alone being on stage.
No characters experience any sort of personal evolution. Think of the journey Simba in “The Lion King” goes through,
or the evolving romance of the Beast and Belle. In contrast, Pongo and Missus are just a pair of dogs whose family is threatened
by a lunatic.

Even potentially strong emotional moments are watered down —- particularly involving Perdita, a Dalmatian whose husband
and kids are missing.

As for the music, it’s OK in a direct-to-DVD-sequel sort of way.

Still, “The 101 Dalmatians Musical” is a marked improvement over last season’s abysmal “Chitty Chitty
Bang Bang.” And the real dogs are immensely appealing.
__________

I have a long-standing fondness for the Little Sisters of Hoboken, the cloister of habited divas who evolved from a line
of greeting cards into the quintet of characters in Dan Goggin’s musical “Nunsense.”

That’s largely because, unlike other theater-for-people-who-don’t-really-go-to-theater shows, “Nunsense”
gives its actresses license to be playful. The message is clear that none of this wackiness really matters. It’s surprising
and charming when a tender moment sneaks in, when the Saint jokes and easy audience jibes give way to a hint of sincerity.
Or when a tune proves catchier than those in more ambitious shows and when, in the end, you realize how much you really like
these ladies.

In Actors Theatre of Indiana’s production (through March 28 at the Carmel Community Playhouse), it sometimes seems
the degree of Catholic knowledge isn’t that deep. And the trio of younger sisters could be better differentiated (street-smart
Sister Mary Robert Anne, for instance, sometimes seems as wide-eyed and clueless as Sister Mary Amnesia). But all sound terrific
and the show remains a hoot. And I’d check the roof for structural damage after Sister Mary Hubert (Claire Wilcher)
lets loose on the arbitrarily show-ending number “Holier Than Thou.”
__________

Having worked together on the piece for several years, the troika of writer/actor/director that created “After Paul
McCartney” (which ran through March 14 at the Indiana Repertory Theatre) found richness that would be near impossible
in a traditional few-week rehearsal period.

Those rich moments and sharply etched characters (all from the one-man cast of Rob Johansen), helped balance the preponderance
of coincidences that marred the show’s quest plot. And while an ambiguous ending seemed to raise an unsatisfied “Huh?”
from the audience, playwright (and Nuvo arts scribe) David Hoppe’s nuanced story of a search for the title
Beatle by a pair of adult friends raises interesting questions about the relationship between musician and fan.
__________

The Cabaret, which spent last year at the Connoisseur Room, now is comfortably ensconced at the Columbia Club, where singer/songwriter
Amanda McBroom offered a strong show March 5-6.

While the room has lost some of its predecessor’s tightly packed intimacy, the feeling is now supper-club swanky. And
the billowing backdrop, the Monument Circle view, and the knowledge that Hoagy Carmichael’s piano is upstairs add to
its sophisticated pleasure.

McBroom promised a celebration of the music of French legend Jacques Brel, but saved his songs for after intermission. Before
that, she focused mostly on her own tunes, ranging from the trying-too-hard, maudlin “Wheels,” to the stunningly
specific “Errol Flynn,” a tribute to her supporting actor father that is as beautifully constructed as her biggest
hit, “The Rose,” (which she saved to the end.)

Hearing the Brel songs made clear the influence he has had on McBroom’s writing. And her delivery was gutsy and strong
and satisfying. Banter throughout was fun and smart and seemed very sincere. I’ll admit it: It feels nice when national
talent is impressed with our town—if for no other reason than it makes it more likely her cabaret peers will hear the
good word and visit.

Next up at the Cabaret: Brenda Williams and Shannon Forsell in “Sirens of Song” March 26-27, then “An Evening
with Melora Hardin,” featuring the supporting player from TV’s “The Office.”•
__________