A 16-acre wood nestled against the White River and surrounded by the Keystone at the Crossing shopping center will become
a public nature preserve.

Oliver B. Daugherty, who died last year at age 71, left 53 acres that includes the woods and his family home to the Central
Indiana Land Trust. The land trust, which will receive the property June 12, has named it "Oliver's Woods."
An open house is planned for 3-6 p.m. that day. 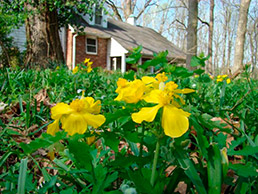 Daugherty lived quietly in the house that his great-grandfather built in the mid-1800s—and he refused to sell the land
for development despite the booming retail area around it.

"It's just amazing he was able to say 'no' to the offers that were coming in," said Maria Steiner,
community relations director for the land trust.

Developers weren't the only ones knocking on Daugherty's door. Several members of the land trust board of directors
had visited him over the years, but none thought they'd made much of an impression. "When we found out about the
bequest, we were surprised," said Cliff Chapman, conservation director.

The majority of the 53 acres is already in use as the Town Run Park mountain bike trails under an easement with IndyParks.
The land trust plans to continue that relationship. Most of the wooded area lies west of Carmel Creek and surrounds Daugherty's
former home. The driveway is off River Road, past a shopping center and apartment complex. "We're the closest land
trust to a Saks Fifth Avenue in the Midwest," Chapman joked.

Although the woods is small, Chapman said he hopes people will take advantage of its convenient location to see migrating
birds and wildflowers in spring, or a bald eagle flying along the White River frontage in the winter. The property includes
a half-mile of frontage along the river, which is visible from the house.

The land trust eventually plans to use the River Road house as its headquarters and has agreed to spend $250,000 within 10
years on its repair and upkeep. The cost of upgrades, however, could exceed that amount.

Central Indiana Land Trust, a four-person organization led by Executive Director Heather Bacher, has an annual operating
budget of $315,000, but Steiner said the not-for-profit has experience with capital campaigns. It recently raised more than
$300,000 to protect 10 acres at Burnett Woods in Avon and now is trying to raise $505,000 to create a new nature preserve
near Lamb Lake in southern Johnson County.

The property originally was part of a 300-acre tract owned by Daugherty's great-grandfather, Dr. James Livingston Thompson.
Generations of the Indianapolis family used it as a farm and summer retreat until the 1950s. The construction of Interstate
465 split the property, and the northern portion later was sold for development.

Chapman said Daugherty preserved the southern portion by striking a deal with a cousin, who lived in Arizona. He agreed to
sell the area north of I-465 for development of the Crystal Lakes subdivision. Daugherty received a portion of the income
as lots in Crystal Lake were sold. He had no close living relatives and left his money in an endowment that will be managed
by longtime friend David Wilcox.