Barnes & Thornburg LLP is proving that its entrance last year into the upper echelon of the nation’s largest law firms was no fluke.

The Indianapolis-based firm ranked 85th in The National Law Journal’s annual listing, released Nov. 8, of the nation’s 250 largest firms, up two spots from its previous position.

Barnes & Thornburg has 484 lawyers—one more than it had last year—in offices in seven states and Washington, D.C. The firm has 226 lawyers in Indianapolis and is the largest in the city, according to the most recent IBJ statistics.

The firm has grown its roster of attorneys the past few years roughly 8 percent through office openings and an acquisition. 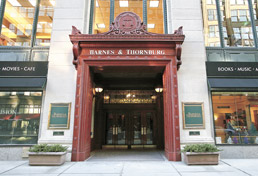 Two more locally based law firms again made the list, but they fell in the rankings. With 281 lawyers—five less than last year—Baker & Daniels LLP slipped from 149th to 152nd. Ice Miller LLP, with 227 lawyers, lost 16 and fell from 169th to 182nd.

Attorney head counts at the nation’s largest 250 law firms dropped 1.1 percent this year, marking a second consecutive year of decreases. That’s only the second time in the 33-year history of the list that back-to-back declines occurred, NLJ said.