Despite an improved team on the floor, the Indiana Pacers continue to struggle at the gate.

With the addition of guard Darren Collison and the emergence of Roy Hibbert, the Pacers have shown glimpses of promise on the court, and are solidly in the hunt for an Eastern Conference playoff spot. 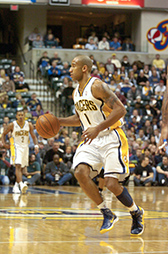 The Pacers’ attendance ranks 28th in the 30-team NBA so far this season. (IBJ File Photo)