Home » Best bets: Finding the Indiana casino that’s a winner for you

Let me come clean right away: I’m a gambler. And there’s not much I enjoy more than a long weekend in Las Vegas. But since moving to Indianapolis almost a decade ago, I’ve spent far more time in Indiana’s riverboats and “racinos” than working on my neon tan in Sin City. Gotta support the home team, right?

For about 15 years, Hoosiers have been able to double down, feed one-armed bandits and push all-in without leaving the state.

Now the Indiana has five casinos on the Ohio, five on Lake Michigan and one in rural Orange County.

Two years ago, Indiana’s two horse tracks added to the state’s gambling menu, opening so-called racinos that offer electronic gambling within a toss of the dice of the capital city.

So given Indianapolis’ central location, what’s a gambler to do when she gets the urge to press her luck? Figuring that out is nearly as hard as deciding whether to hit or stand on 16. Sometimes you just have to go with your gut—fact is, most gamblers’ favorite casino is the one where they left with a pocketful of cash.

Personal preferences also come into play. A favorite game and a friendly dealer are draws for some. Loyalty programs keep others coming back for the perks. And I have friends who describe themselves as “convenience” gamblers who only visit a casino when they’re already in the neighborhood. Then there are those like my sainted husband, who just go along for the ride when a loved one gets the itch.

There’s a certain sameness to many casinos—you know, the smoky air, clanging slot machines, abundant buffets and scantily clad cocktail waitresses (who, sadly, are prohibited by state law from offering free booze). But there are some distinguishing characteristics that might tip the scale.

So here’s a rundown on the basics, with insight from someone who (probably) has been there:

The five casinos located on Lake Michigan are an easy drive from Chicago, but a bit more of a hike for central Indiana residents—about three hours north on Interstate 65. But there is a convenience factor once you’re there: Four of them are clustered within about 15 minutes of each other amid the smokestacks and oil tanks that define the region. And the outlier is less than an hour east. 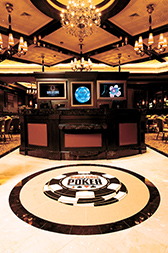 History: Opened in 1996 as the Empress Casino, renamed Jack Binion’s Horseshoe Casino in 2001, and rebranded as Horseshoe Hammond in 2008; part of the Las Vegas-based Caesars Entertainment Corp. family

Casino: 108,000 square feet of table games and slot machines on two levels, including a high-limit gaming room, a 34-table live poker room and the separate Asian Gaming Room, which includes a noodle bar

Other amenities: The Venue showroom, which features entertainers such as Whoopi Goldberg, Huey Lewis and the News, and Alicia Keys; two bars and multiple dining options

Good to know: $500 million expansion opened in 2008; no hotel or spa on the property; Total Rewards loyalty club cards can be used at sister casinos; site of World Series of Poker circuit events

History: Opened in 1997 as Showboat Casino and was known as Harrah’s East Chicago and Resorts East Chicago before being acquired by Las Vegas-based Ameristar Casinos Inc. in 2007

Casino: 56,000 square feet of gaming space on four levels, with slot machines and table games, including a high-stakes area and separate Baccarat room with noodle bar

Good to know: Casino guests can access an outside deck for river views; no live poker room; Ameristar operates properties in other markets, but loyalty cards are casino-specific 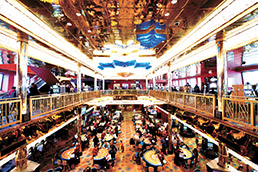 Casino: Almost 80,000 square feet of slots and table games in separate three-level casinos that operate as a single unit (and share a boarding area); Majestic Star I has a high-limit room for table games and a Baccarat room with noodle bar; Majestic Star II has a live poker room.

Other amenities: 300-room hotel on the property with an enclosed walkway to the dining pavilion and casino

Good to know: Free live entertainment every weekend; generous promotions for regular customers; no ties to other casinos 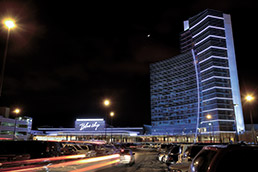 Casino: 65,000 square feet of slot machines and table games on one level, including a live poker room

Good to know: Of the northwest Indiana casinos, Blue Chip feels the most like Las Vegas, with an open casino and everything guests need in close proximity; B Connected loyalty card can be used at all 16 sister casinos.

The six casinos south of Indianapolis generally have more elbow room than their urban cousins up north, with most located in rural areas. Three are within about an hour of each other near Cincinnati, one is just across the river from Louisville, and the others are in French Lick and Evansville.

History: Opened in 1996 as Argosy Casino; rebranded in 2009 after a $336 million expansion by Pennsylvania-based owner Penn National Gaming Inc.

Good to know: The most Vegas-like of the southern casinos, Hollywood hasn’t felt like a riverboat since the expansion. Site of nationally televised World Poker Tour event

Good to know: First floor of casino is smoke-free; historic Rising Sun is within walking distance, and trolley rides into town also are available 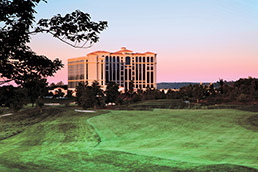 Good to know: Expect to explore small-town Indiana on the drive—including historic Vevay; hubby and I enjoyed the Aquarium Café enough to eat there twice in one visit (try the ribs).

History: Opened in 1998 as Caesars Indiana and rebranded in 2008; part of the Caesars Entertainment family

Casino: 93,000 square feet of slots and table games on four levels, including a high-limit area and 30-table poker room 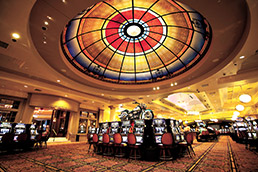 Casino: 51,000 square feet of gambling on a single level, including a separate non-smoking area and a high-limit room with VIP lounge

Good to know: The casino is secondary—if that—at this sprawling property surrounded by the Hoosier National Forest. French Lick Springs Hotel and West Baden Springs Hotel each are historic landmarks that were in their heyday in the 1920s, and then fell into disrepair. French Lick Springs reopened in 2006; West Baden Springs, which includes a 200-foot domed atrium once called the “eighth wonder of the world,” reopened in 2007. Shuttle service between hotels is available.

Other amenities: 347 rooms at two hotels, including a luxury boutique hotel; eight restaurants and nine bars in the Riverfront Pavilion and The District entertainment complex

Good to know: The District, a $40 million expansion project, is located across Riverside Drive from the casino; a second skywalk also is planned.

Feel a hot streak coming on but not up for a drive to one of the riverboats? Central Indiana’s two horse tracks offer electronic gambling closer to home. These gambling parlors are just what they sound like: Row after row of machines—slot, blackjack, roulette, craps and poker—and not a card or chip in sight. Oh, and guests also can still bet on the ponies in the separate track areas.

History: Opened in a temporary facility in 2008 and the full “racino” the following year; owned by Indiana Downs LLC.

Casino: 233,000 square feet of gambling on one level, including a high-limit room and a 10-table electronic poker room

Other amenities: A variety of dining options, including the white-tablecloth Maker’s Mark Bourbon House

Good to know: An easy drive southeast on Interstate 74 in rural Shelby County

Casino: 92,000 square feet on a single level, including a high-limit area and a four-table electronic poker room

Good to know: An easy drive north on Interstate 69, but not visible from the highway