For sure, it has all the conceptual candy you’d expect from a $1.3 million land-use study.

The study proposes a technology park, farmers’ markets—even a 69-acre solar farm that’s right out of a BP commercial. 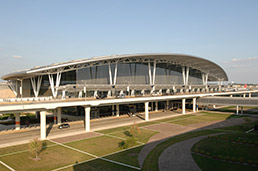 But where the rubber hits the runway, the Indianapolis Airport Authority’s land-use plan for the next 30 years is more about how to grow and harvest revenue from logistics operations at Indianapolis International Airport.

The plan recommends that the near-term focus of logistics development should be centered on the east side of the airport, which includes the former passenger terminal.

“According to our land-use consultants, that’s an amount probably equal to what [Chicago] O’Hare Airport has today,” said Mark Hedegard, senior business development director for the Indianapolis Airport Authority.

That’s not even counting the potential farther to the northeast—the former terminal’s sea of abandoned parking lots bounded on the north by Washington Street and on the east by Interstate 465.

That area offers about 400 acres for freight forwarders, manufacturers, electronic repair shops—most any firm that needs lickety-split access to an airplane.

If you’re an airport authority trying to wring out every molecule of revenue from your land holdings, then growing logistics is good for the income statement in other ways as well.

Besides just collecting the rent from buildings leased to logistics firms, cargo firms also pay you landing and apron fees. FedEx, with its massive hub here, pays more in landing fees than all 10 of Indianapolis International’s scheduled carriers combined—about $10.4 million vs. $10 million for the passenger airlines.

“In the end, the growth of the airport is going to be in cargo flights,” said David Holt, vice president of business development and operations for Indiana logistics initiative Conexus.

Holt also participated in the study, which was conducted by international aviation consulting firm Landrum and Brown and approved by the airport authority Feb. 18.

There’s already more to logistics at the airport than FedEx.

Not as well-known are carriers such as Cargolux, which flies Boeing 747s directly from Luxembourg to Indianapolis. Schenker Logistics set up shop at the airport to handle the medical cargo Cargolux transports. What helped land Cargolux were the shipping needs of a handful of local companies, most notably Roche Diagnostics.

So Holt, of Conexus, and airport officials have been surveying other companies locally to build a database of who’s shipping what where. To the extent they can identify common destinations, the odds of landing more cargo carriers and supporting logistics firms will improve.

Despite the slickest land-use plan and best airfield access, it won’t happen overnight.

“No, no interest in that space” so far, Hedegard said when asked if the cargo industry has made serious inquiries into the former terminal space.

The old terminal is destined to be demolished, he said, which should help make a better case for marketing the land. Curiously, on Landrum and Brown’s land-use plan, the old terminal’s adjacent parking garage remains. The garage, with twin, helical ramps that became a landmark along I-465, is “still in OK shape,” Hedegard said.

The airport’s east end could accommodate even more air cargo and logistics operations, the report says, by relocating general/corporate aviation facilities on the southern end of this zone, “over time.”

Those tenants would move to an area of more than 175 acres on the northeast end of the field, just east of the former ATA Airlines hangar. There are already a handful of general aviation hangars there.

“This will allow the entire east portion of the [airfield] to be dedicated to cargo and logistics,” states the report.

The extreme northeast corner of the airport, near West Washington Street and I-465, would be suitable for cargo support operations. Streets could be designed to accommodate tractor trailers that would hop on and off the nearby interstate.

The northeast corner also has a CSX rail line running through it, which enhances the multimodal shipping possibilities. The line goes east to downtown; in the other direction it goes west, then curves north, to Chicago. Just north of the airport the tracks tie into another rail line that leads into the Avon rail freight yard.

The land-use plan says the northeast corner rail access could accommodate more than freight. It could also facilitate a rail line that would transport passengers from one airport development zone to another. And it could connect key parts of the airport to a possible future passenger rail system from downtown.

From the northeast corner of airport property, the potential rail line would extend west, running roughly in parallel with Washington Street. One stop could be another proposed zone in the land-use plan: a technology/education park on the north side of the airport.

“An important element of the development will be the establishment of Center for Excellence in Logistics,” the report states. “The complex will also be located near the rail connector, which will facilitate easy access for students, employees and guests.”

Hedegard said he’s had preliminary discussions with Purdue University about the potential for such a logistics-focused facility. Purdue and Vincennes universities already operate an aviation training institute at the airport.

Such a rail link could travel farther west, then south to a multimodal transport park proposed for just west of the new terminal’s I-70 entrance. This multimodal zone could become the new parking area for rental car fleets, which now are parked in the new terminal’s parking garage. As passenger numbers grow in years to come, the airport may well need the extra, revenue-generating parking space now taken up by rental cars.

The multimodal zone could also become the new home of a taxi and limousine staging area as well as the airport’s cell phone lot. Currently they occupy land along the entrance to the terminal that has more lucrative future development potential for retail development and aviation-related corporate office use.

This multimodal zone could be connected to the midfield terminal by some sort of shuttle system. The report doesn’t specify whether it would be a rubber-tired or rail-type shuttle system. The new terminal was designed with passageways beneath the roads that lead up to the terminal entrance that could accommodate a light-rail unit.

The land-use plan has other revenue-generating ideas beyond logistics.

The entrance to the airport—that area between I-70 and the midfield terminal— consists of roughly 270 acres. The study envisions development such as high-end offices, retail shops, restaurants and a conference center. Space for a hotel already exists next to the terminal’s parking garage.

One urgent need, suggests former Indianapolis Airport Authority Board President Mike Wells, is a service station. Out-of-town residents who use the airport are often clueless where to fill up. “They should have done that [gas station] all along,” said Wells.

Hedegard said airport customers have indeed asked about the potential for a service station at the terminal. That need is likely to be addressed early in the development plan.

At the far southern end of this zone is where the airport proposes the solar-panel farm be located. Within the next few months, the authority may invite requests for proposals from firms to operate the farm, whose power—perhaps 10 megawatts—likely would be sold to Indianapolis Power and Light.

The far southwest side of the airport—about 2,037 acres—would continue to be set aside as a conservation area. About 100 acres of that land have potential for industrial development, other parts possibly for tree farms and organic farming, for example.

Conspicuously de-emphasized in the land-use plan is nearly 2,000 acres owned by the airport south of I-70. It’s long been regarded as the site for a future third parallel runway, one likely to be used by ever-expanding FedEx.

But the report states that there’s no current demand to justify investment. Development might not occur at that site before 2025.

And just how much could the airport generate in additional revenue if the proposed developments in the plan were built? Landrum and Brown estimates the potential for $30 million to $63 million a year by 2040.

By then the authority estimates Indianapolis International will handle about 14 million passengers, or nearly twice its current number. Cargo growth is projected to hit 1.7 million metric tons from about 900,000 tons in 2009.•