Gotta find my corner of the sky,” sings the lead character in “Pippin.” “Who am I?” sings Jean Valjean in “Les Miserables.” “There must be more than this provincial life,” sings Belle in “Beauty and the Beast.”

A staple in musical theater is the lead character trying to figure out how he or she fits into the great big universe. And that goes for “Avenue Q” as well. The difference here, though, is that Princeton, the recent graduate who asks/sings “What do you do with a BA in English?”, is a puppet.

The hit musical—which proved an underdog winner for Best Musical in the 2004 Tony Awards against the juggernaut “Wicked”—“Avenue Q” follows Princeton as he transitions from academia to the “real world.” In this case, the real world is populated not only by flesh-and-blood humans, but also by fanciful fur characters, including the porn-addicted Trekkie Monster, the adorable but dangerous Bad Idea Bears, and the very, very available Lucy the Slut. If you are of the age that grew up with “Sesame Street”—which covers just about anyone under

50—you’re likely to appreciate the show even more.

Yes, as you may have heard, “Avenue Q” is, at least at first, an R-rating-worthy “Sesame Street.” And as presented in its regional theater premiere at the Phoenix Theatre, the up-close-and-personal environs accentuate both the show’s sweetness and its explicitness. Assistant kindergarten teacher Kate Monster (Emily Ristine), for instance, gets her share of “Awwwwww” moments, especially when singing the plaintive “There’s a Fine Fine Line.” And she’s also a prime noisemaker who leads to the tune “You Can Be as Loud as the Hell You Want (When You’re Makin’ Love).” In both cases, the feelings are more awkwardly and movingly human than they seemed to be when I saw the show on tour in larger theaters here and in Louisville. 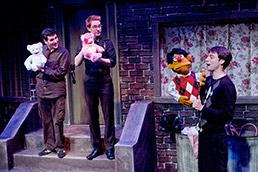 “Avenue Q” also gains clarity in other ways in this cleanly directed, smartly designed production. Gary Coleman (yes, he’s a character), comes to life in ways I hadn’t seen before thanks to the talents of Da’Keisha Bryant. The heavily accented dialogue of Christmas Eve (here played by Diane Tsao Boehm) didn’t survive the sound systems in my two visits to the show’s national tour. That isn’t a problem at the Phoenix. And the quality of the video sequences led me to ask after the show if they were supplied by the Broadway creators (nope, it turns out, they were the work of local Zach Rosing). And if the voices don’t always reach the level one would want listening to a cast album, some of the off-notes actually add to the truthfulness of the imperfect characters.

A local production can’t tamper with the source material, so Jeff Whitty’s book still has the same pacing issues it always has had. But the music and lyrics by Robert Lopez and Jeff Marx become even more fun on re-hearing. Yes, you may find yourself leaving the theater singing “Everyone’s a Little Bit Racist” or “Shadenfreude.” 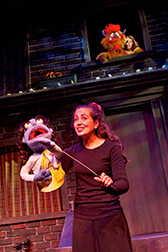 And you may find yourself returning to the Phoenix with a few friends in tow. “Avenue Q” runs through July 10.

Trivia note: If the two talented leads, Emily Ristine and Ben Tebbe, look familiar, it’s because both appear in commercials for Tire Barn, an underwriter of the show.
__________

Before I get to “Glee Live in Concert,” I should make clear, first, that I haven’t watched a full episode of the show since the beginning of the first season. Nothing against it. I just didn’t catch the bug. I have been exposed to “Glee” through osmosis, though, (I’ve got teen daughters) and I’ve admired “Glee” for its ability to broaden the musical horizons of a generation.

For a while there, it seemed like the music business was bent on categorizing everyone. And online options made it easier to just stick with what you know—and what you were told your demographic should like.

“Glee” gleefully bucked that trend by mixing pop hits with standards with Broadway tunes (popular and obscure) with hair-band songs from the 1980s and singer/songwriter tunes from today. Not since “The Ed Sullivan Show” has there been this sort of musical mix in prime-time television (FYI: On the same night The Beatles famously appeared on that show, the cast of the Broadway musical “Oliver” also had a spot.)

The range of selections tipped more heavily toward pop at the Conseco Fieldhouse show, although a  “Get Happy”/”Happy Days are Here Again” blend shared the stage with the likes of “Jessie’s Girl,”  “I Wanna Hold Your Hand” and the obligatory “Don’t Stop Believin.’”

The show presented the performers in character, so I’ll say that, Mercedes and Kurt were terrific—and hearing them through the screams and the muffled sound system left me hoping they do a duo cabaret concert at more intimate venues.

Rachel didn’t display any diva qualities (and she rained on my parade a little by not singing “Don’t Rain on My Parade”). Instead, she seemed to enthusiastically give herself over to the group. Rival club The Warblers were in fine form in a trio of “Teenage Dream,” “Pretty Love Songs” and “Raise Your Glass.”

In short, if  you love “Glee,” there wasn’t much not to love here.

And the interminable half-hour gap between the opener and the actual “Glee” show.

And the nagging question of how much actual live singing was going on. And I’m not talking about the obvious and deliberate lip synching and dance sequences, such as Kurt and a tribe of women dancers doing “Single Ladies.”•