From their station off the 7th hole of the Woodland Country Club golf course, Carmel homeowners Mike and Sally Kerr can view a lot more than manicured green space and magnificent trees. 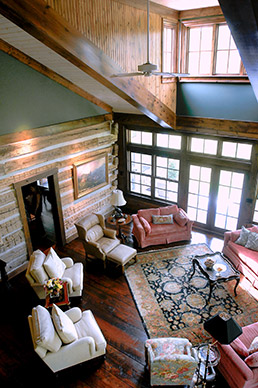 The “new house” was built around the original clubhouse building. An outside wall is now sheltered in the new living room. (IBJ Photo/ Perry Reichanadter)

They can see directly to the past as they walk around their Southern plantation-style residence built completely around the walls of the course’s original club house.

Mike Kerr, retired president and chief operating officer of Hunt Construction Group, and Sally purchased the home in the late 1990s after their four children had grown. They wanted a place that would reflect Sally’s southern roots, be comfortable for grandchildren and provide a home base for playing golf, entertaining and everyday life.

When they found the log cabin on the Woodland grounds, near 116th Street and Range Line Road, they fell in love with the idea of a renovation project.

The Kerrs’ only edict? “The log cabin stays,” said Sally, recalling how many contractors urged the couple to tear down the existing three-room structure and start from scratch. 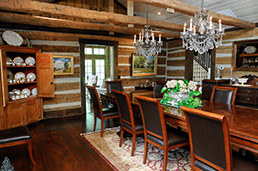 “It was important to keep the integrity of the existing house,” recalled local residential contractor Steve Gray, whose company SGR Project spearheaded the remodel.

At the time of their purchase, the logs used to build the original clubhouse were more than 100 years old. Those logs had been individually selected by Bill Diddel, Woodland’s famed golf course designer, who built several log cabins, including his home, on the Woodland grounds.

“The biggest design consideration was to save the log cabin because of the history and everything associated with Woodland and Bill Diddel,” Mike said. 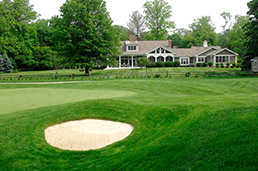 In 1928, Diddel purchased the land that would eventually become Woodland Country Club. He held onto the property through the depression and war years and began designing the course in 1951. A public course at first, Woodland was incorporated into a private, members-only club in 1956.

Diddel, a native Hoosier, went on to design more than 300 golf courses in the United States and Canada, including those at Meridian Hills and Hillcrest country clubs. He died in 1985 at age 100.

“It’s wonderful that they have chosen to honor Mr. Diddel by keeping a portion of the cabin,” said Laura Huckelberry, membership director and event planner at Woodland Country Club. “It’s a huge part of our history.”

At the same time that homeowners like the Kerrs have chosen to preserve portions of the club’s history, many properties on and around the club grounds are being extensively refurbished with an eye toward the future, Huckelberry noted. Over the past decade, she said, young families and other homeowners have been tearing down homes or remodeling as part of a trend that makes Woodland a desirable place to live.

Huckelberry attributes a lot of that momentum to the 2002 makeover of the course by world-famous designer Pete Dye. “When we redid the golf course, values went up. More and more people are wanting to live on and around the course,” she said. 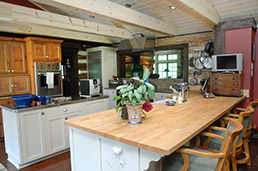 Despite its roots in history, the Kerr home puts an emphasis on modern comfort and livability. (IBJ Photo/ Perry Reichanadter)

The Kerr’s insistence on keeping the original structure resulted in a quaint yet sophisticated mix of styles. Log walls mingle with crystal chandeliers, family china and casual country accents to create a comfortable, eclectic look.

“Everything is kind of kick-your-shoes-off comfortable,” said Sally, joking that “people come over and we have a hard time getting rid of them.” Both the Kerrs are avid golfers and frequently host their friends after a day on the links.

The family room – with its expansive views of the golf course, an adjacent bar and Tennessee river rock fireplace – serves as the primary focal point for entertaining. Though neither Sally nor Mike cook a great deal, they designed a kitchen and hearth room right off the foyer that offers another gathering spot. 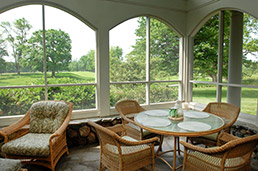 Along the back of the house, oversized windows, a breezy sun room and an expansive porch offer several alternatives for taking in the golf course and a host of mature trees. At the same time, club members who frequent the course often take the opportunity to offer their two cents on the Kerr home.

According to Sally, a sense of communal ownership has sprung up around the home. “Everyone kind of thinks of this as their house,” she said.

The three bedrooms are situated on the main floor, leaving the smaller second floor for home offices, a painting alcove for Sally and a casual play space for the couple’s nine grandchildren.

With family scattered around the country, the house provides an ideal space for far-flung relatives to gather, though the Kerrs typically spend Christmas at their winter home in Arizona.

The annual relocation out West is something Mike would happily give up to spend more time at his Hoosier abode. “He would get rid of the place in Arizona,” said Sally, “because he just hates to leave here.”•