Home » Veteran banker Alley found Integra too sick to save

Mike Alley never thought it would be his job to save Integra Bank Corp.

He was approached about joining the Evansville company’s board in November 2008, shortly after the bank closed a quarter with a whopping $33 million loss and non-performing assets approaching $100 million.

With reluctance, Alley, a veteran Indianapolis banker, joined the board in April. 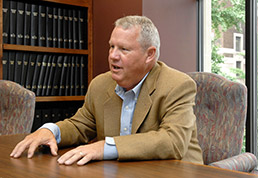 Mike Alley said no to the CEO position at Integra a couple times, but ultimately agreed to lead the bank on an interim basis. It turned into a 26-month endeavor.(IBJ Photo/ Perry Reichanadter)

A month later, he found himself CEO—the beginning of a 26-month odyssey that ended July 29 with banking regulators seizing and shutting down the 160-year-old institution. Integra joined Columbus’ Irwin Financial Corp. as the only two Hoosier banks to fail since the economic crisis hit in 2008.

“The combination of the economic headwinds, plus the [bank’s] ill-timed acquisitions, resulted in a bad set of circumstances,” said Joe DeGroff, who worked with Integra to raise capital as a partner at Indianapolis law firm Ice Miller LLP. “They tried their hardest to deal with the headwinds, but they were too strong.”

Alley initially rejected overtures to join the board, in part because he feared Integra was a sinking ship. He began to reconsider in February 2009, when Integra received $84 million through the federal government’s Troubled Asset Relief Program, or TARP—a sign, Alley thought, that regulators believed it could regain its financial footing.

Alley, now 55, also had sentimental ties to Integra and its home market. He grew up in Petersburg, about 40 miles northeast of Evansville, and both of his parents worked for banks later acquired by Integra.

Plus, he had the time. In 2002, Alley had wrapped up a successful, 13-year run leading Cincinnati-based Fifth Third Bancorp’s central Indiana operations. After leaving banking, he focused on private investments, some of which he’d wrapped up.

What followed for Alley were two years of fighting forces that have felled 361 U.S. banks since the beginning of 2009: too many real estate loans, not enough capital and an unwillingness by skittish outside investors to provide additional funding.

In two years, Alley and his team cut the bank’s commercial real-estate loan portfolio, sold branches and reduced operating expenses, at times through deep cuts in staff. But they couldn’t keep regulators at bay.

They swooped in after the close of business July 29, shutting down the bank and engineering the sale of most of its operations to Evansville-based Old National Bancorp.

“We made a lot of positive moves,” Alley said. “In the end, it just wasn’t enough.”

What ultimately did Integra in was its aggressive expansion in commercial real estate over the past decade. But Mike Vea, who served as CEO from 1999 until Alley took the job, told IBJ the bank began veering off course before his arrival.

In the 1990s, the bank—then known as National City Bancshares—bought 16 institutions in areas such as southern Illinois and western Kentucky. Its assets tripled to $2.1 billion, Vea said.

When Vea came aboard, he consolidated the banks under the Integra name.

But he was left with a hodgepodge of institutions with small deposit bases in rural markets with declining populations, making it hard to increase revenue.

Over the next few years, Integra worked to grow deposits, add products and increase its market share in Evansville. Those efforts, though, weren’t enough to fuel long-term growth.

“While we improved the branches, we were still faced with the market demographic issues,” Vea said.

So, in 2003, Integra began pushing into commercial real estate. It hired a team of loan officers and began opening branches and loan-production offices in Cincinnati, Cleveland, Columbus and Louisville, with a focus on providing loans for developers in those markets.

Then, in 2007, Integra bought Prairie Financial Corp., based in suburban Chicago, for $117 million. The bank had been in business more than three decades, Vea said, making short-term construction loans to builders of small multifamily projects in Chicago neighborhoods.

At the time, the strategy seemed safe. Vea said the loans were mostly designed to be for a year or less, leaving developers to refinance in the permanent market. But with the financial crisis, the secondary market for commercial real estate shut down, so many borrowers were unable to refinance. In addition, when Integra opened loan-production offices, it required that loan officers make at least 90 percent of their loans in their home markets—the areas they knew best.

However, by the end of 2008, 20 percent of Integra’s commercial real estate loans were backing out-of-market projects. Some were in areas hardest hit by the recession, such as Las Vegas and central Florida.

In addition, some of the loans were far too large for an institution of Integra’s size, and the interest rates were too low, said John Key, who served as chief credit officer under Alley.

“It was clearly a growth strategy—doing larger deals and doing them quickly,” Key said.

In 2008, a year after Integra acquired Prairie Financial, the crash of the financial markets and lingering economic uncertainty threw the real estate sector into chaos. The value of the real estate serving as collateral on the loans, along with developers’ ability to repay the loans, tumbled.

And by the end of the second quarter in 2009, roughly 8 percent of loans were non-performing. Before the downturn, many Indiana-based banks had non-performing loans below 1 percent. And even as many local banks continue to struggle, the norm now is closer to 3 percent or 4 percent.

Integra’s non-performing number would continue to grow as the commercial real estate market continued to sour and a team scoured Integra’s assets, uncovering the depth of the bank’s troubles.

Soon after he joined Integra’s board in April 2009, Alley realized things were worse than he thought.

At his first shareholder meeting that same month, Alley said he was surprised by the level of tense discourse, which included calls from shareholders for Vea to step down.

The bank’s board agreed there was a need for management change, but they thought relationships among existing managers were too strained to pick an effective internal candidate.

So they turned to Alley. He said no—a couple of times—but in May agreed to do it on an interim basis. His replacement would be picked after a national search in the next few months.

But by the time July arrived and Integra prepared its second-quarter earnings report, Alley understood how dire the picture was. Hiring a new CEO took a back seat to fixing the company’s problems.

So by late that year, Alley took another approach: Try to raise capital and reduce operating costs by selling branches outside a 100-mile radius of Evansville.

Beginning in late 2009, Integra sold 27 branches, reducing its footprint to 48. The bank also slashed operating costs 41 percent, cutting its work force in half, from roughly 950 to 480.

Meanwhile, the bank was “exiting the commercial real estate lending line of business,” as managers wrote in Integra’s first-quarter 2010 filing.

The bank closed its loan production offices and continued to reduce its volume of real-estate loans by selling non-performing loans at a discount, offering borrowers a discount if they paid off loans early, and selling healthy loans along with branches.

Those efforts succeeded by some measures.

Integra’s commercial real estate portfolio continued to dwindle, reducing the bank’s exposure to that toxic market. By March of this year, loans in that sector had shrunk to $580 million.

The bank’s branch sales also netted $25 million to bolster capital. But for a bank that recorded a loss of almost $195 million in 2009, that wasn’t enough to make a significant impact. It was clear those moves couldn’t save the bank.

The branches Integra sold were healthy. As a result, “the remaining franchise after these sales was less attractive,” said John Reed, a veteran Indianapolis banking expert who leads the local office of investment banking firm David A. Noyes and Co. That made it tougher for Integra to generate revenue.

And as Integra charged off more loans—$114 million in 2010, up from $89 million in 2009, it had to increase loan-loss reserves, which eroded earnings and capital.

A quest for capital

In August 2010, the Office of the Comptroller of the Currency ordered Integra to boost critical capital ratios within 90 days.

Under percentages set out by the OCC, the amount Integra needed to raise at the time was $110 million. But Alley said when estimated future losses were considered, the need was “substantially more.” (He wouldn’t disclose an exact figure.)

The company toiled to get capital, appealing to individual investors and private equity firms. It proved a huge challenge.

The bank was highly leveraged, with $186 million in TARP debt and trust-preferred securities.

And the biggest obstacle was the same issue that dogged Vea in his quest to grow revenue a decade earlier: Integra wasn’t in a prime growth market.

In investors’ eyes, that meant chances seemed slim of Integra’s thriving after its capital problems were addressed.

“There are many troubled banks around the country, which means there are many opportunities for private equity firms,” Reed said. “So you’re going to select those for which you can get a deeply discounted price and a potential sale opportunity once it’s fixed.”

By December 2010, Integra’s capital ratios had declined to a level that caused the bank to be considered undercapitalized under OCC regulations. Its three-year losses amounted to $430 million.

In March, however, there was a sign of hope. Alley said he had secured a letter of intent from a prospective buyer whose name he could not disclose.

But the next month, the potential buyer backed out. And Integra fell another notch into the “significantly undercapitalized” category.

On May 2, Alley received a “prompt corrective action” letter from the OCC, telling him Integra had 90 days to achieve the previously defined capital ratios—or potentially face takeover.

He knew the fight was over, though employees continued working to sell non-performing loans until the last hours of operation.

The bank’s collapse was a rare failure for Alley, who became well-known in the 1990s for his success in expanding Fifth Third’s Indianapolis-area presence.

On Aug. 8, about a week after regulators shut down Integra, his emotions were a mix of disappointment and relief.

He focused on the progress he felt he and the Integra staff had made.

The Federal Deposit Insurance Corp. will shoulder about 80 percent of the bank’s sour loans, a cost estimated at $171 million, while Old National will take on 20 percent.

Alley estimates that liability could have been twice as great were it not for the work he and others did the last two years.

“It’s kind of like you get to the championship game and you don’t win it,” Alley said. “You realize you gave it everything you had.”•