The $12 million overhaul of Georgia Street into a three-block pedestrian mall in downtown Indianapolis could feature monuments saluting many of Indiana’s most famous Hoosiers. 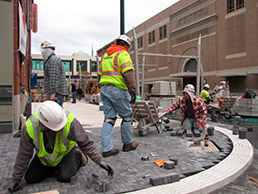 The historic street will retain its current name at least through the city’s hosting of the Super Bowl on Feb. 5, but the mayor makes clear he still prefers a more suitable name with a local flavor.

“I never felt comfortable honoring great Hoosiers on a street named after another state,” Ballard said in a written statement. “But after listening to a lot of public input, I have asked Indianapolis Downtown Inc. to stop the street-renaming process while we finalize the plans for these memorials and gather additional public input.”

Plans call for up to 30 columns along Georgia Street paying posthumous tribute to the greatest Hoosiers. The 6-foot-tall monuments would include an image of the person and an accompanying biography. Possible candidates include Col. Eli Lilly, Madame CJ Walker and Virgil Gus Grissom.

The Super Bowl Host Committee has donated roughly $75,000 to fund the first 15 monuments. Each monument is estimated to cost about $5,000.

Ballard has asked the Greater Indianapolis Progress Committee to assemble the inaugural class, possibly up to 10 native Hoosiers, whose monuments could be erected in the spring, said Marc Lotter, the mayor’s spokesman. A few monuments would be unveiled each year until the street is lined with all 30, he said.

Lotter said the mayor chose to back off the renaming effort for now to instead focus on the larger project.

“Obviously, there are some passionate thoughts on the concept of renaming it, and the mayor’s always listening to public input,” Lotter said. “He also wants to get this broader vision out.”

“It’s standing up for what you believe is correct, and that’s retaining the name,” said Mansfield, a Democrat, who asserted that her resolution has support from councilors of both political parties.

A Facebook page created by Joan Hostetler also makes a case against the rebranding and had 1,042 supporters as of Friday morning.

City and community leaders began considering the name change for the 190-year-old street earlier this year after construction crews began the massive overhaul.

Residents could submit their suggestions in an online survey from Indianapolis Downtown Inc. that ended Sept. 13.

The idea, they said, was to create a fresh identity for the street in time for the Super Bowl. The project is designed to create a major public gathering place between the Indiana Convention Center and Conseco Fieldhouse.

The pedestrian mall also could attract visitors for the Big Ten football championships—the inaugural game is set for Dec. 3 at Lucas Oil Stadium—and for conventions and for events at Conseco Fieldhouse.

The street is listed on the 1821 Alexander Ralston “Plat of the Town of Indianapolis,” and is home to the city’s oldest hotel, the Omni Severin (98 years), and oldest Catholic church, St. John the Evangelist (140 years).

Construction on the street is set to be finished by Nov. 1.