The slide whistle and the snare drum get as much of a workout as any instrument in the band during “Jack Milo’s Baggy Pants Burlesque,” and that should give you some idea of the level of humor celebrated in this deliberately unoriginal original show.

Unlike the nouveau burlesque troupes that have been popping out all over Indy lately, the emphasis in the Beef & Boards Dinner Theatre production (running through Jan. 8) is on comedy rather than striptease. Here, such fundamental questions as, “Why is my finger like a pie?” are asked, students are instructed to use the word “ascot” in a sentence, an infant-garbed adult shoots seltzer from a baby carriage, and you find yourself giving in to punch lines like, “Even the czar was nickel-less.” 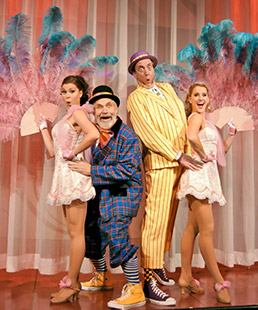 Frankly, I was excited to learn that someone else knew both of the one-armed bell-ringer jokes.

Taking a break from the typical B&B fare, “Jack Milo’s Baggy Pants Burlesque” begins knowingly, with a wife dragging her husband to the theater.

“How many times can you see ‘The Sound of Music’?” he asks, with a nod to the shows usually found after the buffet at Beef & Boards. What he wants are jokes he’s heard before and gals to lust after.

And that’s what he and the audience get, even if the ladies in the show have all the va-va-voom of a high school production of “Guys and Dolls.” (Sorry, but a fully clothed fan dance loses some of its raison d’etre.)

That’s not to say the song-and-dance interludes aren’t spirited and well-sung. But they take a back seat to the obligatory schoolroom sketch, the obligatory courtroom sketch, and the obligatory hospital sketch. The fact that rubber-faced leading man Jack Milo doesn’t appear in drag seems a remarkable and rare sign of comedic restraint.

For the most part, it works, with big laughs throughout. In an era when just about every joke ever uttered is available online, it’s nice to know there’s still enormous pleasure in hearing them live. “Jack Milo’s Baggy Pants Burlesque” has the makings of a B&B tradition.
__________

A few years back, I was asked by the show biz newspaper Variety to write an essay identifying iconic characters—those that have endured in the popular consciousness—created in the past 100 years on page and on stage.

Along with the obvious Sherlock Holmes, Tarzan, Batman, James Bond and the like, I included Willy Wonka. Who among us, I reasoned, can open a chocolate bar without secretly hoping, if only for a moment, that it contains a golden ticket?

For all his literary and film popularity—and perhaps because of those—the quirky candy maker has yet to make a satisfying transition to the stage. The challenge: how to capture the quirky joys of Roald Dahl’s characters and story, the crazy scale and fun specificity of the chocolate factory, and the heart of the first film while still being a unique theatrical event.

An adaptor has to wrestle with how much to pull from the original novel, the Gene Wilder classic film, or the interesting-but-hardly-universally-loved Tim Burton/Johnny Depp version. Is there a way to go that takes elements from all three, mixes them with love, and makes the whole thing taste good? 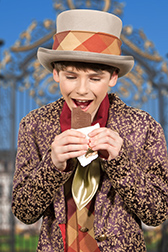 Perhaps Director Sam Mendes will find that magic formula in the large-scale adaptation he has in the works for London in 2013.

Most problematic was the decision to make the theatrical Wonka a host figure similar to The Cat in the Hat in “Seussical.” In the first act, before the chocolate factory doors are open, Wonka drops in and out of scenes, playing multiple characters and commenting on the action, rarely in an endearing way. Rather than warm us up to the man, it makes Wonka less mysterious, less enigmatic and a lot less fun. By the time he opens his doors, he already has overstayed his welcome.

Here we have a Depp-like Wonka (at least in costume). The over-plotting of Burton’s adaptation is ditched in favor of the simplicity of the novel. And Bricusse’s songs from the original film—yes, including the Oompa Loompa ditties—are in the mix.

Alas, the menacing presence of rival candy maker Slugworth (a great addition to the first film) is gone and without him there’s little drama, leaving the rushed ending without a strong emotional payoff.

The Oompa Loompas give the show some needed oomph. And there’s some spark on the kid front with fun performances from the bratty quartet. Here, Charlie Bucket is a dead ringer for the actor in the Burton version, but the slickness of the production works against the pathos of the character. Once you’ve seen Charlie dancing in a “Candy Man” production number, he loses the low-key magic that made audiences root for Peter Ostrum’s cinematic kid.

That being said, I’d certainly rather sit through “Wonka” than another paint-by-numbers “Wizard of Oz” or “Beauty and the Beast.” At least here, the creative sets and costumes indicate that some pure imagination is at work. And the squirrels are adorable.•