Business not only has come to expect its grievances to be heard regularly by the state’s high court, but the court also has established a track record of consensus that has created a comparatively stable legal environment. 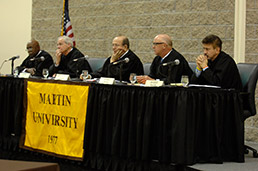 Shepard so managed to balance competing interests that the U.S. Chamber of Commerce rates the Indiana court among the most business-friendly in the nation, and yet one of the state’s leading trial lawyers sings its praises, too.

“The Indiana Supreme Court has been very proactive in considering civil litigation, personal injury, wrongful death, medical malpractice, as well as business litigation,” said John O. Feighner, a Fort Wayne lawyer who is president of the Indiana Trial Lawyers Association, “which it should be doing to declare law in our state.”

The court has undergone more turnover in the past couple of years than at any time since Evan Bayh occupied the governor’s mansion two decades ago. Bayh, a Democrat, appointed four justices in his two terms, and Daniels, a Republican, will name his third justice months before his second term ends in January.

• In October 2010, Daniels chose Steven David to replace Ted Boehm, who retired 14 years after his appointment by Bayh.

• In March this year, Daniels picked his former chief counsel, Mark Massa, to take the place of Shepard, who was named to the court by former Gov. Robert D. Orr in 1985 and became chief justice two years later.

• Days after Massa took on his new duties, another justice announced his retirement. Frank Sullivan, tapped by Bayh in 1993, is leaving to teach at Indiana University this fall, and Daniels is expected to name his replacement in coming months.

The new makeup of the court, coupled with changes undertaken during the Shepard era, is expected to keep the landscape for business interests consistent.

Business had been crowded out of the high court by the state constitution, which forced the court to hear every criminal conviction involving a sentence of at least 10 years. In the first full year of Shepard’s tenure, for instance, criminal appeals filled a whopping 93 percent of the court’s docket.

It was Shepard who pushed through constitutional amendments giving justices discretion to hear more civil appeals.

A 1988 amendment opened the court to hear more civil cases by raising to 50 years the minimum sentence in which a criminal conviction could be appealed.

“They really were silly little criminal appeals that were required to be heard by the Supreme Court,” said Ed Feigenbaum, publisher of Indiana Legislative Insight. “He lobbied pretty heavily for the constitutional amendment to take control of the docket.”

Shepard went a step further in 2000 by helping usher in even larger change—an amendment that increased the benchmark for a criminal appeal to a sentence of death. The court also considers cases involving sentences of life without parole or questions of constitutionality.

The court now hears about an equal number of civil and criminal appeals, with disputes arising from civil cases composing as much as 61 percent of its docket in recent years.

In fact, Shepard insisted, the last of nearly 950 opinions he wrote for the court—Loparex LLC v. MPI Release Technologies LLC, which involved charges of an employee’s violating a non-compete clause—would have had no chance of making it to the Supreme Court before the constitutional amendments.

“The court was almost closed to people who had the kind of legal disputes that involve most citizens and businesses,” Shepard said.

But the amendments weren’t all that gave rise to the state’s business-friendly reputation.

Shepard’s tenure helped bring consistency to a court in which justices in 2010, the last year for which statistics are available, reached unanimous consensus in nearly 90 percent of the cases they decided.

That collegiality is almost unheard of at the high court level, said Mark Crandley, a partner at Indianapolis-based law firm Barnes & Thornburg LLP who writes an annual review of the court’s docket that’s published in the Indiana Law Review.

“The thing we benefit most from is that you get a lot of predictability,” Crandley said. “It’s not a court that’s perceived to be very dogmatic. They’re practical and not prone to wild swings in court opinion.”

So much so that a 2010 study from the U.S. Chamber of Commerce ranked Indiana fourth in terms of how businesses perceive the fairness of the state’s court system.

Indiana trailed only Delaware, North Dakota and Nebraska, and towered above neighboring Illinois. Cook County’s status in the study as the most unfair jurisdiction in the country helped drag the state down to 45th.

For his part, Shepard declined to weigh in on the debate of whether Indiana has become too business-friendly, but said, “it wouldn’t be a good thing” to be first on the U.S. Chamber ranking.

“But it isn’t bad to be toward the favorable end of the scale,” he added. “If you were getting ready to make a business investment, would you make it in a state that is colored black on the map [like Illinois]?”

Losing three justices in less than two years, and two of those within months, could present an interesting dynamic for the court, said Kevin Betz, an Indianapolis attorney who had a two-year clerkship under Shepard beginning in 1988.

But he’s confident the next chief justice will carry on the vision set by Shepard despite Republican appointees outnumbering Democrats on the court 4-to-1, with Rucker being the lone Democrat.

“I don’t see any radical shift with the departure of Shepard, Boehm and even now with Sullivan,” Betz said. “I see them all as good Indiana Democrats and Republicans who tend to be common sense about business issues and not ideological.”•