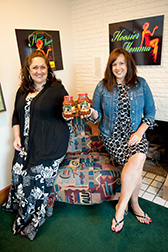 For a company committed to slow-but-steady growth, locally based Hoosier Momma has built some enviable momentum.

The Bloody Mary mix that got the firm started in 2010 now is just one of several products available in more than 900 locations in seven Midwestern states, including retail chains Wal-Mart, Meijer and Kroger.

“If we don’t have 20 things going on at once, it’s almost like we don’t have anything going on,” said KC Cranfill, who owns the firm with partners Erin Edds and Casey “Cat” Hill.

Indeed, Hoosier Momma was a bar standard at several high-profile events during Super Bowl XLVI in Indianapolis and its signature product was the “official Bloody Mary mix” of the 2012 Kentucky Derby Festival.

“We’re excited about the partnerships and the direction we’re going,” she said.

Despite the early success, the partners said they’re in no hurry to add flavors or markets.