A unit of OneAmerica Financial is quietly growing sales of long-term-care insurance through bank channels, signing deals over the last year with national players SunTrust and Wells Fargo.

The SunTrust and Wells Fargo agreements potentially expand the number of bank advisers selling its products by up to 2,500, the company said.

More bank deals may soon be on the way.

“We have some significant new distribution in the works right now,” said Tony Ianni, national sales director for Indianapolis-based OneAmerica.

The other half of its distribution channel consists of financial advisers and brokers, including OneAmerica’s career agents. 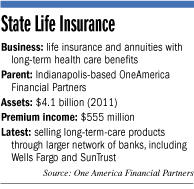 One factor favoring the bank channel is the growing popularity of the type of long-term-care policies State Life has been offering—asset-based, long-term-care products. An industry term for these is “combination products.”

Unlike traditional, health-based long-term-care policies that carry annual premiums, combination products usually are bought in one lump sum as a life insurance policy with long-term-care benefits—or as an annuity that can be accessed for long-term-care expenses.

Consumers reason that, even if they never use the long-term-care benefit of a combination policy, there is still the life insurance or annuity benefit.

Traditional long-term-care insurance often is more comprehensive in its benefits. Sales of individual long-term-care products have struggled over the last decade, however, with carriers such as Allianz Life dropping out. Consumer apathy, economic troubles and rate increases depressed sales.

The bank channel has been effective in part because potential customers are those who already have a relationship with their bank adviser. Banks are ever-intent on growing their financial advisory and commission income and many customers seek more advice as they age.

A long-term-care combination product also can be a relatively easy sell in that the consumer is essentially buying two products in one—long-term-care coverage and the life insurance/annuity benefit.

The banking channel hasn’t been especially difficult to support because State Life would still have the expense of selling through member agents, for example, said John Maselli, OneAmerica’s regional marketing director.

Not all insurers have embraced the bank model to sell long-term-care insurance. Bankers Life, a Chicago-based unit of Indianapolis-based CNO Financial, sells the policies through its career agents.

About 10,000 Americans turn age 65 each day. The average annual cost of a private nursing home room in Indiana in 2010 was $72,270, according to Prudential Insurance’s Long-term Care Cost Study.•