We arrived at the painting from the wrong direction.

What you should do when visiting the Art Institute of Chicago: Enter through the main doors off Michigan Avenue, climb the Grand Staircase to the second floor, take a breath, and enter Gallery 240, where “A Sunday on La Grande Jatte—1884” seems to rise as you walk down toward it. 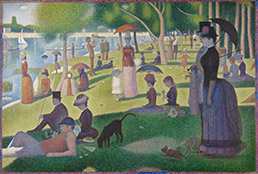 Unlike Van Gogh’s “The Bedroom,” which is in the next gallery given no more prominence than its neighbors, George Seurat’s masterpiece has a wall to itself, with the approach rather theatrically orchestrated.

But that’s not how my 35 traveling companions and I did it this time. We came in from the opposite direction, through the Impressionist galleries where we cavalierly walked past some of the most renowned works in the history of art in order to get to our goal.

Whether they know it from art history class or from its cameo in “Ferris Bueller’s Day Off,” the shimmering “Sunday” is one of the Institute’s most recognizable works. About 30 years ago, composer/lyricist Stephen Sondheim and playwright/director James Lapine stood in this same gallery, staring at this same painting, soaking it in and asking each other the questions that would lead to their groundbreaking Pulitzer Prize-winning musical “Sunday in the Park with George.” 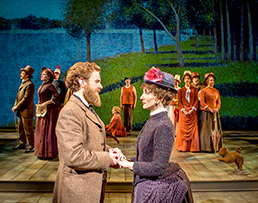 George Seurat’s “A Sunday on La Grande Jatte—1884,” top, provided the inspiration for the musical “Sunday in the Park with George,” above. (Photo courtesy of Chicago Shakespeare Theatre)

Just a few weeks ago, the cast of Chicago Shakespeare Theatre’s production of that same show (running through Nov. 11) were in this gallery, too.

For an Oct. 20 visit to both the painting and the musical, I was in the company of 35 participants in the first IBJ A&E Road Trip, an exercise in arts connectivity crafted in conjunction with Indy-based Interlude Tours. The idea: Explore the arts beyond our own back yard, enhance the experience with elements not available to regular ticket buyers and tie it all back to offerings in central Indiana. And we had a great time.

In this case, the ride to Chicago included a discussion of Sondheim’s work and an exploration of both the process and the themes that led to “Sunday in the Park with George” (carefully avoiding spoilers for most of the participants, who were experiencing it for the first time).

Once in Chicago, we were given a question-and-answer-packed backstage tour of the theater, a past winner of the Tony Award for best regional theater in the country. Next we moved on to the Art Institute to see the Seurat and then to explore on our own, reconvening for the show at Chicago Shakespeare.

The first act of “Sunday” focuses on a fictionalized version of Seurat, emphasizing his conflict between being a part of the world (represented by his lover, Dot) and his need to “finish the hat”—work on his painting while the inspiration, and the light, is right. It famously culminates in a tableau of actors and images forming the painting on stage, with the harmony achieved visually and musically.

The second act jumps ahead a hundred years to a possible descendant of Seurat, also an artist, facing a crisis of vision.

Beyond the gorgeous singing and the smart, intimate design, this production transcends through a subtle emphasis not on the artistic struggles, but on the more universal question of how we hold onto moments in time—what we do with memory when memory isn’t a solid thing.

What can easily become two linked stories of self-absorbed artists gets wisely tempered with the characters’ doubts. When George (Jason Danieley) says, “I am not hiding in my painting, I’m living in it,” he’s not spouting his thoughts, but forming them—testing his ideas by putting them out into the world. And once said, he still isn’t sure if they are true or if he is making the right choices.

For the first time, I believed that George truly loves Dot. And I believed that Dot (Carmen Cusack) understands by leaving her difficult lover, she’s giving up part of her own artistic self.

Those differences bring on a whole new set of connections between the audience and the work. I used to admire “Sunday in the Park with George” and love much of the music. Now—even with some second-act clunkiness still plaguing the piece—I’ve seen its greatness.

It’s no longer just about an artist or two. It’s about everyone.

And then there’s the painting, forever tempered for me by Sondheim and Lapine, yet still its own singular, special creation. Every masterful pointillist color comma, every accenting dot, every combination of pigment that fuses together from a distance, is a choice—a choice by the artist to be there, with the painting, rather than be somewhere else in the world.

The road trippers themselves seemed to shimmer on the way out of the theater. The conversations on the ride home were lively. And I can’t wait for the next time we hit the road.

Next up, “War Horse” in Cincinnati. Watch for more information on future trips on my blog at www.ibj.com/arts. For early notice, e-mail lharry@ibj.com with subject line: Road Trips.•