The NBA’s new collective bargaining agreement will dramatically boost the amount of money the Indiana Pacers get from the league, but it won’t be enough to put the team in the black. 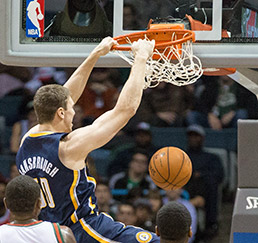 Pacers officials say they have lost as much as $30 million a year. (AP photo)

The Pacers are projected to receive about $20 million from shared league revenue this year, four times the amount the team received under the old arrangement, which expired after the 2010-2011 season.

The new contribution from the league accounts for about 20 percent of the team’s annual revenue, according to recent estimates by Forbes magazine.

The Pacers can certainly use the help. According to Forbes, the team has lost money each of the last six years. The last two full seasons, the Pacers lost a combined $32.6 million, Forbes estimated. During the strike-shortened 2011-2012 season, the Pacers lost $10.5 million.

Team executives have said those estimates are low, that losses for a recent single season have been as high as $30 million.

It’s not clear how the additional cash will affect negotiations with the Capital Improvement Board, the public entity that owns the city’s sports and convention facilities.

The franchise and CIB are replacing a 2010 pact in which CIB agreed to pay the Pacers $33.5 million over three years to help operate and upgrade Bankers Life Fieldhouse.

“This is not a party issue,” said Lewis, a Democrat. “All the councilors understand the financial benefits of having professional sports teams in this city. It’s just a matter of what we can afford and what our other priorities are.”

Under the new pact, 15 of the NBA’s 30 teams will be league-subsidized. The 10 richest teams will fund the revenue-sharing plan, and five other teams will neither get nor contribute funds.

The receiving teams will split $200 million this season, compared with $54.5 million during the 2010-2011 season—the last under the old deal.

The Pacers—along with the Memphis Grizzlies, Charlotte Bobcats, Sacramento Kings and Milwaukee Bucks—will be the top benificiaries, according to NBA sources.

The largest large-market teams, which rake in tens of millions more annually than the Pacers in media-rights deals, local sponsorships and stadium revenue, will contribute $15 million to nearly $50 million a year. The L.A. Lakers will contribute the most, according to league sources.

All ships will rise on the new tide. During the 2010-2011 season, only eight NBA teams were profitable, according to league sources. Last year—the first under the new contract—18 were in the black. This season, 22 are projected to be profitable.

The Pacers, league sources said, won’t be one of them, but they’ll be close to covering basketball operating expenses, which doesn’t include the cost of operating the fieldhouse.

Venue is a drag

Sports business experts said the extra money is no panacea.

“This deal may help [the Pacers] be more competitive and financially sustainable, but only with excellent management,” said Marc Ganis, president of Chicago-based SportsCorp Ltd., which counts several NBA teams as clients. “With this new deal, the best-case scenario is break-even.”

Pouring the money into fieldhouse operations isn’t the intended use.

“The league’s expectation is that you put your money back into basketball operations, which helps maintain the overall competitive balance of the league,” said University of Michigan professor and sports business expert Mark Rosentraub.

The NBA wants teams to invest the revenue-sharing money in roster upgrades that will bolster attendance and sponsorship sales, which in turn raises even more money for the small-market teams, Ganis added.

Though Pacers officials say the expense of operating Bankers Life Fieldhouse is an albatross, there is an upside for the franchise. It gets to keep revenue from all events held there, from concerts to ice shows. Pacers officials decline to say how much those events generate, but they’ve said it’s not enough to cover expenses for the 18,165-seat venue.

Rosentraub said competition from surrounding cities has cut into what the fieldhouse can generate in outside income. Since it opened in 1999, arenas have opened in Columbus, Ohio, and Louisville, plus other Midwestern markets.

Escalating player payroll is another reason the Pacers might continue to struggle in spite of the windfall.

“One thing you have to realize is, the salary cap also is going up and, more importantly, the salary floor, or the minimum teams have to shell out for player payroll as part of this new deal, is going up,” Ganis said.

The new contract requires owners to spend at least 90 percent of the salary cap on team payroll, an increase from 75 percent under the old agreement. The salary cap, calculated annually based on league-wide revenue, is the maximum a team can pay its entire roster.

By 2020—the last year of the new contract—the average NBA player salary is expected to be $8 million, according to NBA Players Association documents.

That means, in 2020, Pacers owner Herb Simon could be facing a $110 million player payroll. That exceeds this year’s by more than $40 million.

Owners in Indiana, Atlanta, Charlotte, Denver, Memphis, Milwaukee, Minnesota, Philadelphia, Portland and Sacramento said in a letter to NBA Commissioner David Stern in 2010 that a 50-50 revenue split between owners and players represents a bad deal for owners. But that’s exactly what Stern and the NBA Players Association settled on.

Each percentage point is worth $40 million annually. The 50-50 split represents a collective $280 million in annual savings for team owners—$2.8 billion over the life of the deal.•