Developers are moving forward on plans for a 25-acre, grocery-anchored redevelopment in the Highland-Kessler neighborhood after winning city zoning approval this month.

The project, led by Indianapolis-based Douglas Realty Group, calls for a 42,000-square-foot anchor store, about 15,000 square feet of small shops, and two one-acre outlots potentially for a restaurant and bank, all at the southeast corner of Michigan Road and Kessler Boulevard. The total cost would range from $25 million to $30 million.

The developers have fielded “solid expressions of interest” from retailers but have not yet closed any deals, said Doug McAuley, a principal in Douglas Realty. He said they won’t break ground until they land lease commitments.

The company’s portfolio of work includes the Kroger-anchored center at 71st Street and Binford Boulevard and the Starbucks-anchored shopping center along 116th Street immediately west of Interstate 69 in Fishers.

The latest proposal, dubbed Highland-Kessler Commons, is for an area underserved by grocery stores. The nearest stores are a Safeway on Illinois Street to the east, and Marsh stores at 71st Street and Michigan Road to the north and 56th Street and Georgetown Road to the west. Each is about two miles from the development site.

The size of the anchor box suggests a small-format grocery store like a Walmart Neighborhood Market, or perhaps a specialty grocery such as Whole Foods or Earth Fare. A traditional full-service grocery store such as Kroger is 70,000 square feet or more.

The intersection could be a strong draw based on the national tenants that already have opened there: Starbucks and Subway anchor a Sandor-developed strip center on the northeast corner, and Dunkin Donuts anchors a Schoolcraft-developed center on the southwest corner. (Both Sandor and Schoolcraft are locally based.)

“We see it as a great infill site for neighborhood retail,” said McAuley, whose partner Jim Robertson bought the bulk of the property in 2006 before the Great Recession put a freeze on most development projects. “We feel that part of the Michigan Road corridor is underserved.”

The 25-acre site—sandwiched between the Broadmoor Country Club and Highland Golf and Country Club—is composed of five parcels, including 20 acres that include the vacant former home of the North Park Masonic Lodge at 5555 N. Michigan Road, along with four single-family parcels fronting Michigan.

Douglas Realty has contracts to purchase the single-family properties and expects to close in the coming months.

Plans call for the lodge building, erected in 1957, to be torn down, along with three of the single-family homes. One of the homes would be relocated.

McAuley envisions the project as “a catalyst for future redevelopment as you head north on the Michigan Road corridor.”

There’s no timetable for construction yet; the first priority is landing an anchor tenant. That effort began in earnest after the project won approval from the Metropolitan Development Commission on Dec. 5, and the City-County Council Dec. 17. The availability of financing for retail projects has improved, McAuley noted. 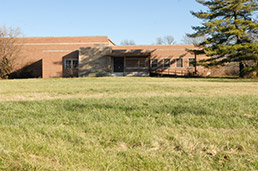 A grocery store and retail strip are planned for a 25-acre property that includes the vacant former home of the North Park Masonic Lodge, built in 1957 at 5555 N. Michigan Road. (IBJ photo/Perry Reichanadter)

The development has the support of about 70 percent of those in the neighborhood, guessed Ray Baker, former president of the Highland-Kessler Civic League, who has lived in the area for 23 years and attended dozens of meetings about the proposal.

“The prevailing thought is, retail is better than trying to fight off another apartment complex,” said Baker, who lives within a mile of the site. “There’s great support for a neighborhood grocery. I want to be able to walk to a grocery store.”

Some neighbors were concerned about the types of uses the strip-center portion could attract, but the developers assured them they were looking for upscale uses.

The developers also agreed to preserve about five acres of mature trees on the northeast portion of the site as a buffer between the new commercial space and abutting residential neighborhoods. McAuley said the firm is researching whether it should give the property to a land preservation trust.

The location is strong and, if the developers manage to land a grocery anchor, the project should find success with secondary tenants, said Gary Perel, director of retail services for Newmark Knight Frank Halakar.

Perel said the trade area is “defined by diversity.”

“It’s a unique trade area, a tweener,” he said. “It’s certainly an underserved market” surrounded by a mix of low-, middle- and high-income areas.•