Degrees in geology and careers at a six-employee conservation group would seem like far-fetched ways for Heather Bacher and Cliff Chapman to garner national attention.

But a guidebook their organization put together is generating buzz among peers as far away as Alaska and even is working its way into college lesson plans.

“At conferences, it’s like she’s a rock star,” Chapman said with a grin as he tipped his head in Bacher’s direction.

The duo work for the Central Indiana Land Trust, a not-for-profit that operates on less than $400,000 a year from the third floor of a turn-of-the-century house at 1500 N. Delaware St.

Bacher, the executive director, started working for the land trust in 2003 as the sole employee.

At the time, the group worked “reactively.”

“The phone would ring and somebody would have a piece of property that they might be interested in protecting,” she said.

“But as our organization grew and matured, we knew that, to better serve the central Indiana region and our mission, we needed to be more thoughtful and proactive and strategic in what we did.”

In 2007, Bacher pitched an idea to her board: Reel in money and develop a strategy that would take a more forward-looking approach to conservation.

She told her board the land trust would continue its original mission of acquiring land and protecting wildlife in central Indiana to guard against future development. As of today, 4,000 acres are under the trust’s protection.

But she wanted to be more aggressive about spreading environmentalism, prodding others to pursue conservation projects the trust can’t handle on its own.

“We are going to manage land that we value and the community values,” she said. “And also, working as a community institution, we will bring our expertise to the rest of the people in this region who affect land use and have a stake and love and care about the land that we do.”

Six donors chipped in $50,000, and an additional $80,000 from a Nina Mason Pulliam Charitable Trust grant kick-started the project. The organization got a second, $200,000 grant in 2011 from the Pulliam trust to keep the project going.

Bacher in early 2008 hired Chapman as conservation director, and the two of them recruited Indianapolis architect Chris Boardman from Ratio Architects to guide the project as a volunteer.

By 2009, the trust released “Greening the Crossroads.”

The 60-page strategy identifies more than 300,000 acres that have conservation potential throughout the 3.1 million acres in Marion County and its eight surrounding counties. 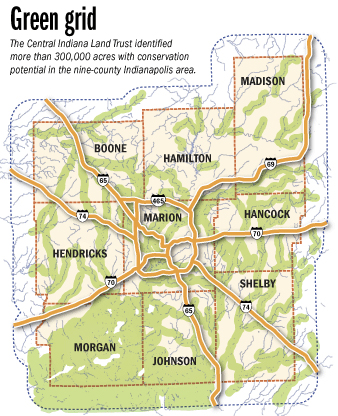 The map highlighting those areas includes many waterways, nearly all of them privately owned, as well as a mass of undeveloped land in Morgan and Johnson counties.

The scope of the plan—covering farmland, wetlands, forests, waterways and cityscapes—is broader than that of similar organizations around the country, said Erin Heskett, national services director for the Washington, D.C.-based Land Trust Alliance.

“What’s cool about the ‘Crossroads’ project [is], it created a vision where there was no vision,” Heskett said.

A separate, 30-page report details how the trust worked with scientists, planners, government officers and other experts to identify the 300,000 acres.

That information helped Kim Sollien of the Great Land Trust in Palmer, Alaska, more than the Indianapolis group’s actual strategy.

Sollien, a project manager for the land trust in southern Alaska, was charged with developing a conservation plan for Matanuska-Susitna Borough, where Palmer is the seat.

“I quickly got on the Internet to figure out who else in the country is doing this,” she said. “It was incredibly helpful to me to read about their process in terms of working with different stakeholder groups to identify these resources. It really helped me paint the picture of what we could do here.”

A third, 30-page report explains how community groups can carry out a gamut of conservation and restoration work.

Land trust representatives travel community to community to present their reports to residents as a way to ignite conversations that might spur them to start their own projects.

It was that kind of community visit that persuaded Tom Johnson and his wife to sell to the trust 109 acres that they owned next to Lamb Lake in southwestern Johnson County.

His father-in-law, Russell Lamb, built the body of water after buying the property and the surrounding land. Johnson, his wife and his brother-in-law had known for years they wanted to keep nature intact, but lacked the financial resources to do so.

In 2008, just months before inheriting the land, Johnson met Chapman and learned about “Greening the Crossroads” and about his property’s wildlife.

Chapman visited the wooded site, which is in the town of Trafalgar. He won over Johnson after he started to play recordings of birds.

“He was able to bring in a couple types of warblers that hadn’t been seen in the state in years,” Johnson said. “That to me, helped seal the deal, that we could preserve that.”

Confident in the land trust’s ability to protect the land, the Johnsons sold the lakefront, wooded property to the organization for $4,000 an acre, well below the assessed value. The trust then set up a nature preserve.

While the land trust will set up preserves on land it owns, as it did in Johnson County, the organization typically doesn’t do the actual conservation work, such as cleaning up waterways. Most of the land “Greening the Crossroads” identifies is privately owned.

In their most hands-on roles, employees serve on committees and advise government offices, private businesses and landowners.

The trust will offer its input on matters as basic as rezoning so that ecology is being considered in local infrastructure projects.

Ashlee Mras, a project manager in Indianapolis’ Office of Sustainability, said the city started thinking greener in 2008 or 2009—coincidentally, around the same time “Greening the Crossroads” published—about environmentally friendly approaches in lieu of traditional, “gray infrastructure,” such as roads and storm drains.

The city office is one of several that has consulted “Greening the Crossroads” for projects like the Reconnecting to Our Waterways initiative to improve the city’s creeks and rivers.

Mras, the city’s liaison for the project, said the initiative decided to remove invasive plants from along Fall Creek, under the land trust’s advisement. That will allow the natural flora to grow there, filtering the water and lowering pollution.

The ability of “Greening the Crossroads” to connect a private land trust with government offices in order to accomplish region-wide goals caught Aaron Thompson’s attention at the University of Wisconsin’s Stevens Point campus.

Thompson, an assistant professor of natural resource planning, learned about the plan when he was working on his doctorate at Purdue University.

The guidelines—with their regional scope and deep community involvement—impressed him enough that he now uses the plan for a unit in his classes.

“I think the nine-county, regional focus was a big part of what’s been successful,” he said. “Planning is usually done at the county or city—municipality—levels.”•