The American Pianists Association brings top young players to Indianapolis for its Classical Fellowship Awards competition with metronomic regularity, but this year there will be some key changes to the event.

For the one pianist who emerges victorious after the April 15-20 competition, the cash prize will be $50,000, up from $20,000 in 2009. And for the first time, this year’s winner will have the opportunity to record on the Steinway & Sons classical music label.

This is also the first time that the APA has hired New York-based classical music PR and marketing specialists 21C Media Group to get the word out, and the first time the finals will be available live via the APA website. 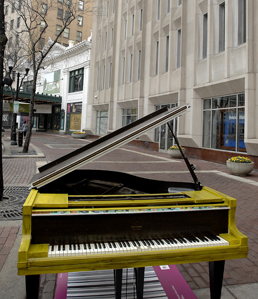 The eight artistic pianos in the "piano pARTs" installation will remain on the Circle through April 21. (IBJ Photo/ Perry Reichanadter)

And, for good measure, festivities surrounding 2013’s keyboard battle for the first time include an installation art show. The outdoor exhibit, dubbed “piano pARTs,” places eight large-scale pieces by different artists around Monument Circle. They’re constructed out of, of course, pianos—some of which remain playable.

The pieces were installed April 5 on the Circle and will remain through April 21. They are available for auction on the APA’s website.

The competition hits its stride on April 15, when a series of recitals will begin at music venues across the city. The finals will take place April 19-20 with performances with the Indianapolis Symphony Orchestra at Hilbert Circle Theatre.

Open to American pianists 18 to 30 years old, the competition was founded in New York City in 1979. The APA relocated to Indianapolis in 1982. It offers jazz and classical competitions on four-year cycles.

The contest differentiates itself from many other competitive musical programs by offering extensive career assistance to its winners. The total value of each two-year fellowship tops $100,000.

The kind of career support depends on the winner.

The time was right this year to bump up the cash prize. “There are several reasons, but the strongest is that I didn’t feel the money was commensurate with the level of talent we were getting,” Harrison said. “These are the top American pianists of their age group.”

The hiring of 21C Media Group already has yielded fruit. Not only are more members of the media expected this time around—Huffington Post blogger Lawrence Vittes has committed to covering this year’s events—but post-concert broadcasts have been arranged.

“Our goal from the beginning was to raise the visibility of an organization that has been quietly doing extraordinary work for a long time,” said 21C Senior Consultant Wende Persons.

Persons has introduced Harrison to journalists and industry people in New York, helped set up a post-competition performance for the winner on WGBH-FM 89.7 in Boston, and an on-air recital for the winner on Chicago classical station WFMT-FM 98.7. WFMT Radio Network is creating a series of four two-hour programs about Discovery Week to air nationally in October.

And there will be a live performance at New York’s Trinity Wall Street church of the five world premiere pieces commissioned for the competition. The Holy Grail of media coverage—a Sunday New York Times Arts & Leisure story or a spot on National Public Radio’s “Morning Edition” or “All Things Considered”—remain out of reach, for now.

For Sean Chen, one of this year’s finalists, the APA’s extended season of competition is one of its distinguishing—and strongest—elements.

While the highest-profile portion of the competition is the April 15-20 Discovery Week, the judging actually extends over seven months. After five pianists are chosen by a jury from recordings submitted by nominees, each finalist comes separately to Indianapolis for outreach events, a solo recital, and a concerto performance with the Indianapolis Chamber Orchestra.

During Discovery Week, each pianist offers additional solo recitals, plays in concert with a quintet, and performs a concerto with the ISO. The winner, designated the Christel DeHaan fellow, is announced after the final Discovery Week concerts with the ISO.

“There’s no other one that I know of that lasts this long, beginning with a gala concert last fall,” said Chen of the compeititon. “With most, you fly there for two weeks or a month, you go through the rounds, they pick a winner and you go home. APA treats it like a season. They treat us like professionals—and we get compensated for what are, essentially, professional engagements even before Discovery Week.”

“The APA is unique,” he added, “because it’s a national competition of international caliber.”