A long-abandoned historic building on North Capitol Avenue downtown is getting revived, thanks to a $16 million redevelopment featuring 111 apartment units.

The former Litho Press building—located across the street from the failed Di Rimini apartment complex—is receiving a total rehab from two local developers. 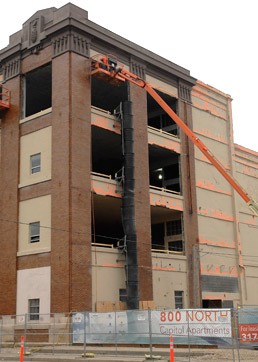 Crews have been working to remove concrete blocks from the windows of the 105-year-old building at 800 N. Capitol Ave. (IBJ Photo/ Perry Reichanadter)

The Whitsett Group and Ambrose Property Group have started construction on the project, known simply as 800 North Capitol Apartments. Completion is expected by the end of the year.

Much of the activity so far is interior concrete and plumbing work. But what’s most visible is the removal of the concrete blocks that had sealed shut the massive window openings. When finished, the 105-year-old building will feature 150 industrial-designed windows to help maintain its original look.

The developers had to preserve much of the four-story, 130,000-square-foot building, including a walk-in safe and a large stairwell, to receive $2 million in tax credits from the National Park Service.

The project also qualified for $2 million in affordable-housing tax credits. Investors financed most of the remainder through a bond purchase. The Whitsett Group has $775,000 of equity in the project.

“We think there’s still an appetite [for downtown housing],” said Tony Knoble, a principal of The Whitsett Group. “Occupancy levels are really strong.”

“What’s out there and available is leasing, so the market is still absorbing it nicely,” said George Tikijian of apartment brokerage firm Tikijian Associates. “We’ll see when the next group of units is delivered.”

“With the close proximity to IUPUI and the Jaguar bus stop that is right there, we think the area is a good location for apartments,” said Patrick Chittenden, a vice president with Ambrose, of the 800 North Capitol project.

The developers are hopeful the project will attract a mix of students and young professionals. Forty percent of the units will be priced at affordable-housing levels because of the tax credits involved.

A landscaped interior courtyard and rooftop pool above the third level are among the amenities, Knoble said. Concrete floors, granite countertops and exposed stainless steel ducts will give the building an industrial feel.

The Whitsett Group purchased the building in December for $2.5 million from the Jack and Nancy Lacy Irrevocable Trust. The Indianapolis Repertory Theatre most recently used it for storage.

It originally housed offices and production for Kahn Tailoring Co., founded by Henry Kahn in 1886. The business operated a retail store at 2 W. Washington St. before moving across Meridian Street to the Kahn Building, 7 N. Meridian St., now known as the King Cole Building.

More than 2,000 dealers carried Kahn’s clothing by the late 1940s. The company merged with Globe Tailoring of Cincinnati in 1954, and by 1970, the Kahn name had faded from the local tailoring trade.

Locally based DkGr Architects is the designer for 800 North Capitol.