The cover of the first issue of IBJ in May 1980 featured a story about plans for a football stadium that would be linked to the Indiana Convention Center. The stadium was vital to the city’s dream of landing a National Football League team, but it would serve another important purpose: raising the city’s profile as a destination for meetings and conventions.

Positioning the stadium, which opened in 1984, as both a sports facility and convention venue became a major advantage for Indianapolis, leading to almost four decades of using tourism to fuel economic growth, a topic that has been a staple of IBJ reporting over the last 40 years.

The city’s formal history as a meeting host dates to 1923, when the Indianapolis Chamber of Commerce took the first steps toward creating a convention bureau. But the movement to make Indianapolis a major player in the national convention economy really got its start with the opening in 1972 of the Indiana Convention Center.

The $26.1 million, 162,000-square-foot building hosted 19 meetings in 1973. Its size was modest compared to today’s center, a 937,000-square-foot, multi-block complex of ballrooms, meeting halls and Lucas Oil Stadium that spreads southwest from the corner of Maryland Street and Capitol Avenue and hosted more than 260 events in 2019. But the 1972 building was an important first piece in a giant puzzle that would need to be solved to make the city a contender for the largest, most prestigious national meetings and conventions. 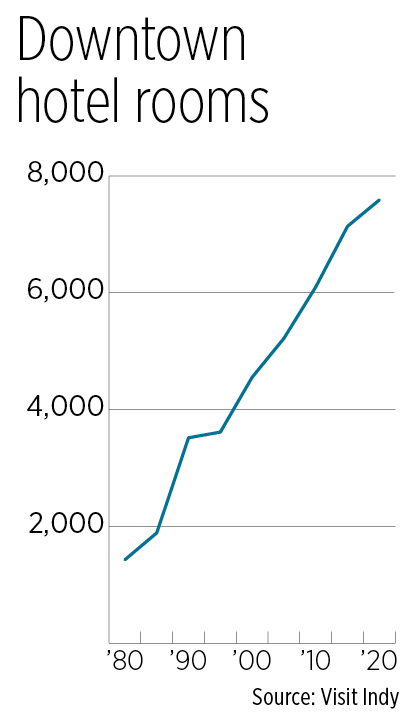 The bigger picture included adding hotels, positioning the city as a go-to host for sports championships large and small, and adding amenities that made downtown an appealing place to visit.

Roger Dow, president and CEO of the Washington, D.C.-based U.S. Travel Association, has been involved in the travel industry almost 50 years and has watched Indianapolis blossom as a tourism destination.

“Indianapolis went from a sleepy, third-rate city to a premier convention location,” mainly because of its facilities, walkability and affordability, Dow said. While many cities have enhanced their appeal as a convention destination in recent decades, few can match what has happened here, he said.

“All cities have done this, but maybe not to the extent Indianapolis has.”

Many pieces of the Indianapolis puzzle have fallen into place in the last 40 years, but competition means the picture is never complete.

Visit Indy, the group that markets the city for conventions, wants to add 80,000 square feet of ballroom and meeting space and 1,400 hotel rooms in two hotels on the block immediately east of the convention center that houses Pan Am Plaza.

An economy cowed by the coronavirus pandemic is the wild card in that plan, but other sticking points are familiar: How many hotel rooms can the city absorb? Are public subsidies appropriate? The discussions happening now are reminiscent of other times in the last 40 years when Indianapolis sought to up its convention game.

By 1980, the city’s potential for hosting large conventions had outgrown the available space. The convention center needed to expand to compete for larger meetings and keep the ones it had. Simultaneously, Fidelity Bank of Indiana Chairman R.V. Welch was networking with the National Football League front office and franchise owners to promote Indianapolis as worthy of an NFL expansion franchise. But the city needed a stadium, or plans for one, to be a serious contender.

Attaching the stadium to the convention center satisfied both needs.

Jim Morris, now chairman of Pacers Sports and Entertainment, remembers driving to the convention center on a cold Sunday in early 1980. “I paced it off from the south side of the convention center to the railroad tracks” to see if a stadium would fit. “There was just enough space,” said Morris, a longtime civic leader who was involved in advancing the city’s convention and sports industries.

Football fans weren’t the only ones hoping for construction of a stadium. The Religious Conference Management Association, a multifaith organization that helps plan and manage religious meetings, had moved here from Evanston, Ill., and had an interest in the city growing its capacity to host religious conventions.

Indianapolis-based Lilly Endowment Inc.—whose grants have historically favored community development, Christianity and education—also saw an opportunity beyond football. The endowment, along with the Krannert Charitable Trust, collectively granted $30 million for the construction of the Hoosier Dome itself. The money the philanthropic organizations contributed—about half the cost of the stadium—mitigated the risk, Morris said, allowing the project to go forward. The city financed the rest with a municipal bond issue that also paid for the addition of a huge ballroom and meeting space.

The total cost of the expansion, which opened in May 1984, was $94 million. It positioned the city to lure the Indianapolis Colts from Baltimore the same year, but it also helped Indianapolis hang onto conventions like the Do It Best hardware trade show, still one of the city’s biggest conventions, but one that would have been forced to move to another city without the 1984 expansion. As anticipated, the larger venue also delivered religious gatherings, which became a staple of the city’s convention industry over the years. “You could have the Presbyterians in town for their meeting and they could have 65,000 people in the Dome for a worship service,” Morris said.

Bigger convention centers aren’t viable without enough hotel rooms. But building major hotels typically requires a public subsidy of some kind, which triggers a debate about whether adding hundreds of hotel rooms to the city’s supply will doom the fortunes of existing hotels.

In a May 1984 story in IBJ, local hotel operators and lodging experts debated how many rooms the city, especially downtown, could absorb.

A report compiled for the Indianapolis Convention and Visitors Association, a precursor to today’s Visit Indy, said the local convention industry’s chief need at the time was a hotel of at least 600 rooms. “Of 27 major cities in the U.S., only Indianapolis and Cleveland do not have a first-class convention-headquarters hotel downtown,” lamented Ray Bennison, who was then president of the ICVA.

Dale Scott, who was general manager of the Hyatt Regency, which had opened downtown in 1977, was worried about the potential competition. “How many hotel rooms should be built? That’s a good question. I don’t really know,” Scott said. “But anyone who says they are not concerned about hotel rooms being built has got to be nuts.”

The city came close to the 600-room hotel it wanted when the 575-room Westin Indianapolis opened adjacent to the convention center in 1989. It wasn’t until the 2001 opening of the 650-room Indianapolis Marriott Downtown that convention planners got their wish for a single hotel of more than 600 rooms.

When the 1,005-room JW Marriott opened 10 years later, just in time to help the city host Super Bowl XLVI in 2012, the downtown hotel inventory reached its present total of more than 20,000 rooms.

Morris marvels at the room count explosion, even though it happened over decades. “I remember when downtown Indianapolis didn’t have a hotel,” he said. “We went from nothing to where we are today.”

By the early 1990s, Indianapolis was seen by peer cities as a rival to be reckoned with on the convention-and-events front. It had hosted the 1991 NCAA basketball Final Four (which had become a much larger event than when the city hosted it in 1980) and shown off the benefits of a linked stadium and convention center in a compact, walkable downtown. But some of the city’s advantages were disappearing. Atlanta built a dome adjacent to its convention center, and St. Louis was in the process of building one in 1993. Others would follow.

But Indianapolis wasn’t resting on its laurels. In 1993, it unveiled a $43 million convention center renovation and expansion that added walkways connecting the center with the Westin, Marriott and Hyatt hotels.

Debbie Locklear, who left a job in hotel sales in 1983 to start Meeting Services Unlimited, said the enclosed walkways have been an important selling point in convincing her clients to have meetings in Indianapolis, no matter the season.

Another selling point, she said, is the compactness of the city’s downtown, which gives conventioneers easy access to one another. “People will tell me, ‘We can see other attendees as we’re out going to dinner,’” Locklear said. “Groups disappear in a city like Chicago.”

The city’s widely praised hosting of the Super Bowl in 2012 further raised its profile and helped companies like hers sell Indianapolis for big events, Locklear said.

The Super Bowl wouldn’t have happened, of course, without another expansion and the construction of Lucas Oil Stadium, which, like its predecessor, was connected to the convention center. The giant construction project was made possible by the Indiana General Assembly, which agreed to a $900 million financial package in 2005. Meanwhile, the Hoosier Dome was demolished and replaced with traditional convention space, a $275 million investment.

The expansion on the drawing board in 2020 is key to being able to host more than one large convention at a time and keeping some of the city’s biggest clients—groups like National FFA and Gen Con, both of which agreed to extend their run of annual conventions here after the expansion was announced.

Bringing new groups to the city is always the goal, but to keep the city on top of its convention game, you’ve got to play defense, too, Visit Indy Vice President Chris Gahl told IBJ last November.

“We are always working with a sense of urgency to keep our annual conventions here in Indianapolis happy and growing.”•