Last month, I wrote about Cardiff, Wales, where I am teaching this summer. I have been comparing Indy and Cardiff. They are both capital cities and sports cities with an industrial heritage. This month, I consider Indianapolis’ and Cardiff’s opportunities to redevelop important industrial river sites.

Cardiff’s Historic Tiger Bay was a shipbuilding and industrial waterfront that employed thousands of people of all nationalities. When its last steel factory closed in the early 1980s, Cardiff’s working waterfront was history. 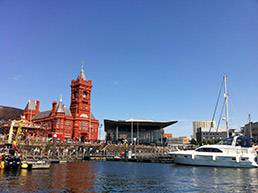 Tiger Bay is now known as Cardiff Bay. Its redevelopment has been a national effort to redefine the industrial waterfront as an international destination. A bold plan was created to redevelop the docks and industrial areas. The plan included building a barrage (dam) across the bay, making it a freshwater lake without the extreme tides of coastal south Wales. Cardiff Bay is now a beautiful lake on the ocean with sweeping views and an amazing history.

But as much as I have enjoyed the energy and blending of new and old in Central Cardiff, I feel the Cardiff Bay waterfront could have been much better. In the rush to make it an international display of contemporary development and design, the Cardiff Council and the Welsh government lost track of the urban fabric that connected the waterfront to nearby neighborhoods.

In spite of hiring great architects to design national landmarks, Cardiff Bay turned out to be a chaotic district of poorly defined spaces and casually related projects. The rich tapestry of blocks, historic buildings and ethnic neighborhoods were ignored, and the docklands and industrial sites were populated with an architectural archipelago and placeless housing developments organized around parking lots.

In the late 19th and early 20th centuries, working class, lunchbox neighborhoods sprung up around the growing industries of Indianapolis’ west side. The neighborhoods of Haughville, Stringtown and Hawthorne provided the labor pool for stockyards, rail yards and auto factories. Their fate was closely connected to the factories in their neighborhood.

In 2011, the last of those factories was shuttered when General Motors announced the closing of its metal stamping plant overlooking the river. This site had been producing cars since 1930 and was the former location of the Martin-Parry (Buggy) manufacturing company and the Indianapolis stockyards. When GM went through restructuring in 2011, the RACER Trust took over the GM site, along with 88 other properties in the United States. RACER has been marketing the GM site to developers and managing its remediation.

At the core of the GM site is the high-bay, sawtoothed factory designed by the famous American architect Albert Kahn. It is a part of our industrial history and has great spaces and architectural form.

However, in the economic and real estate slump there have not been any takers for the existing GM buildings. So, RACER is accepting bids to scrape the site clean. No feathering a project into the neighborhood. No messiness of restoration or incorporation of the historic factory. No memory or uniqueness. Just scrape it and scrap it.

A phased approach with an executive developer seems beyond RACER’s abilities and City Hall’s patience. The site is 102 acres. That equals more than 20 large downtown blocks, or 80 residential-scale blocks like the ones you’ll find in Lockerbie Square. Developed at urban densities, the former GM property will take more than 40 years to build out. So, get used to seeing an empty site in the name of progress.

The good news is, we have a once-in-a-generation chance to reimagine our West Bank. This site has determined the future of entire neighborhoods and should not be a single “project” but the core of the west side’s rebirth. It should catalyze an economic revitalization effort rather than a suburban-esque fort with parking lots.

That, I fear, is what we are going to see on the former GM site unless we prepare an urban design plan for the west side that builds on the Quality of Life Plans previously prepared by the community.

In 2011, the Urban Land Institute sponsored an advisory team visit that made recommendations for creating a new neighborhood facing the river. The team proposed using the historic street grid and preserving the high-bay portion of the GM building for redevelopment as the commercial and mixed-use core of the neighborhood. The concept included a river edge park and landmark midrise development facing downtown. The ULI vision, which is more creative and effective than using bulldozers, would have been a good start.

Cardiff has a similar opportunity. City leaders are considering the future of industrial lands along the River Taff between Cardiff Bay and Central Cardiff. There is a chance to recover from the earlier waterfront redevelopment with a master plan that weaves back together Cardiff’s downtown, traditional historic neighborhoods, the central train station and a cultural waterfront.

Cardiff and Indianapolis can reshape and reinvigorate their riverfront neighborhoods. Will they?•

Bruce Race, FAIA, FAICP, is an award-winning architect and urban planner, owner of RaceStudio, and recipient of the Indiana Sagamore Planning Award. He lives in a historic Indianapolis neighborhood and teaches urban design at Ball State University’s Downtown Indianapolis Center. His column appears monthly. He can be reached at br@racestudio.com.