The proposed Market Square Tower—if it’s built as planned at 28 stories and 370 feet—will be one of the 10 tallest buildings in Indianapolis.

With that in mind, city planners paid close attention to the tower’s impact on the skyline before the proposed structure was chosen to fill a key site on the east side of downtown.

“We wanted a significant architectural component to the development that would be a great addition to the skyline, and this design has it,” said Deputy Mayor for Economic Development Deron 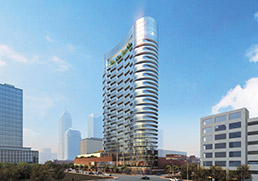 The building will take up part of the former Market Square Arena site. The other half, to the south, is still a parking lot. (RTKL Associates Inc.)

Kintner, who served on the five-member advisory committee that in July picked the $81 million plan by developer Flaherty & Collins Properties over four other proposals for the site.

The tower, designed by the Chicago office of Baltimore-based RTKL Associates Inc., could be completed on the former home of Market Square Arena in late 2015 or early 2016 if construction gets under way early next year as projected. 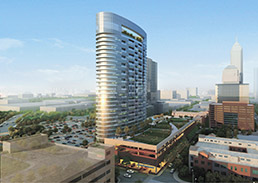 It would mark the first skyscraper to be constructed downtown since the JW Marriott in 2011 and the only one built east of Meridian Street since Chase Tower was completed in 1990. It also would rank as the tallest apartment building in Indianapolis.

The plan calls for a warm-gray or silver tower built of reinforced concrete with a glass-and-metal facade, featuring 300 luxury apartments with floor-to-ceiling windows and panoramic views of the city renting for $1,300 to $2,400 per month.

The tower’s eye-catching “sky window” design shows off a 12,000-square-foot, plant-filled public terrace on the roof, while the four-story base contains 500 parking spaces, 43,600 square feet of ground-floor retail space, and a 42,000-square-foot rooftop garden area complete with a swimming pool.

Michel Mounayar, associate dean and professor at Ball State University’s College of Architecture and Planning, said the building would be a “landmark project” that could be a “turning point” for development on the east side of downtown. He said the “architecture is important and noteworthy.”

The proposed height will make the tower visible from all directions, he said, and provide “fantastic views” to residents.

“It’s a very contemporary design that implies an active and progressive city,” Mounayar said. “It creates another layer on the city’s skyline that makes it appear forward-looking.”

RTKL Vice President Keith Campbell, who heads up a six-person design team for the project, said the design is “definitely a modern expression” that is “pretty unique.”

“We weren’t trying to mimic anything,” he said. “We wanted to create a signature element on the skyline.”

Bill Browne, managing partner of Indianapolis-based Ratio Architects Inc., praised the building’s cylindrical shape, which some have described as sausage-like but is technically an “allantoid.” He also said the structure’s lighter color would offer a “nice contrast” to the darker buildings in the skyline.

The proposed Market Square Tower will add visual weight to the east side of downtown and will likely spark redevelopment nearby. (Image courtesy Terrance Perdue, Ball State College of Architecture and Planning SimLab)

Ratio designed one of the other proposals, a $118 million, 32-story cylindrical tower for developer Keystone Group, that Browne said finished in second place to the RTKL design.

“It’s going to be a nice addition to our city, and we hope it’s a success because it’s important for the area,” he said of the winning proposal. “We think it will fit in nicely with the skyline and downtown.”

Campbell said his team looked at how the building would affect the skyline “pretty closely and tested various views from the highway and inward.” One of the most noticeable features, he said, is likely to be the “basket-weave effect created by the offsetting balconies on the exterior envelope.”

In a presentation, RTKL said the inset balconies solve “what are normally the most disruptive elements in residential high-rise design.” The treatment adds privacy and solar shading, and creates “rhythmic interplay of light and shadow that results in a truly unique façade expression.”

The woven effect carries down to perforated masonry walls around the base of the tower that emit light onto the street at night.

Ball State’s Mounayar said the basket-weave effect “creates a facade that’s not so monotone and boring. It’s a very interesting addition to the design. 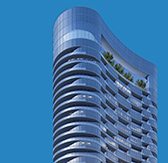 Campbell predicted the public green space on the roof would be used frequently, but he predicted even more use for the much larger green rooftop above the garage and retail areas. The space could be used for events or as a picnic area for downtown workers and residents.

How the building works at those lower levels is even more important than how it looks from far away, Kintner pointed out.

Flaherty & Collins expects to sign several retailers, including a major gourmet grocery anchor tenant such as Whole Foods or The Fresh Market, that will create ground-level foot traffic around the building. The foot traffic and the addition of hundreds of upscale tenants could be good news for the historic City Market across Alabama Street.

“The design is a great addition to the skyline, but it will also fit well in the neighborhood,” Kintner said. “It’s very engaging at street level.”

Market Square Arena was imploded in 2001, but attempts in 2004 and 2007 to redevelop the site failed. The first attempt, which called for condominiums instead of apartments, fell through because the condo market wasn’t robust enough to support pre-sales. The second effort fell victim to a slumping economy.

City officials decided to offer only the northern half of the arena site this time around. They expect Flaherty & Collins, which has a track record of developing big projects both locally and regionally, to succeed.

The developer has used RTKL on other projects, including a massive upscale apartment community outside Chicago called Ninety7Fifty on the Park and a proposed $94 million, 30-story, 300-apartment project in downtown Cincinnati.

RTKL hasn’t tackled a high-rise in Indianapolis, but it worked on the expansion of Community Hospital South and on Clay Terrace shopping center in Carmel. Nationally, the firm is one of the busiest retail designers.

Drew White, a founding partner at Axis Architecture + Interiors, praised the overall look of the tower and said the design “does a great job of disguising the parking element and integrating it” into the building.

Axis, 618 E. Market St., is near the building site, and White said the tower will be a welcome addition to the area that is sure to spur more development.

Axis designed a competing proposal for Browning Investments and The Whitsett Group, but White said he wasn’t upset about not getting the bid.

“It was a fun project for our whole team to work on and we’re very excited about having it in our neighborhood,” he said. “I think this project really sets the table, and challenges us as designers and architects to do better design work.”•