In an auto-sales career spanning more than 50 years, O'Brien built on a single dealership started by his father and created a multi-dealership business that today includes 16 family members. 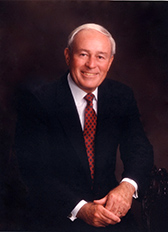 O'Brien's father, Thomas J. O’Brien, opened a DeSoto-Plymouth dealership at 501 Virginia Avenue in 1933 and later enlisted his son to help expand the business.

J. Thomas opened another car lot,  a Chrysler Plymouth Imperial dealership, in 1962 and continued to grow what would become the O’Brien Automotive Family business.

O'Brien was born in Indianapolis and graduated from St. Joan of Arc Grade School, Cathedral High School (1949), and from the University of Notre Dame (1953).

During his long career, O’Brien served as chairman of the Chrysler Plymouth National Dealer Council, and as president of the Indianapolis Automobile Trade Association and the Indiana Automobile Dealer Association.

He was heavily involved at St. Luke Catholic Church and served as chairman for the church's Little Sisters of the Poor charity.

He also was a member of Meridian Hills Country Club and the Crows Nest Town Council.

A cause of death was not provided. The family said he was under hospice care and died peacefully surrounded by family members.

O'Brien is survived by his wife of 61 years, Joan. The couple had 14 children, 57 grandchildren and 11 great-grandchildren.

A calling is scheduled for St. Luke Catholic Church on Friday from 4-8 p.m.  The funeral is at 11 a.m. Saturday at St. Luke.