A state law intended to make sure cash-strapped public school districts pay their debt could have an unintended consequence: permanently parking the yellow buses that deliver students to class. 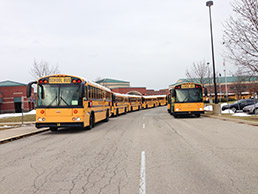 School districts are lobbying the Legislature for a budgeting change that would keep their buses running. (IBJ photo/Andrea Muirragui Davis)

Officials in two of them, Westfield Washington Schools and Beech Grove City School Corp., have notified the state Department of Education that they will discontinue school transportation in three years unless the funding situation is resolved.

The Metropolitan School District of Decatur Township’s board, meanwhile, just authorized a May referendum that will ask taxpayers for another $3.85 million a year to make up a multimillion-dollar budget shortfall. If it fails, the district “could join the other school districts across the state that must reduce or eliminate transportation,” Superintendent Matt Prusiecki said in a prepared statement.

And across town in Franklin Township, which eliminated its transportation program during the 2011-2012 school year and then reinstated it following outcry from parents, officials may need to cut classroom expenses to free up the $4 million a year the district needs to keep its buses running.

“We’ve got to find the money somehow,” said Chad Blacklock, chief financial officer of the 8,500-student district. “Show me another business that loses 38.5 percent of its revenue in a single year and keeps its doors open. We don’t have a choice.”

But legislation passed in 2012 took away that flexibility, requiring that school property taxes be applied to debt payments before any other expenses. The other funds get whatever is left—if anything.

If the change stands, Franklin Township and Beech Grove are expected to lose all their capital projects, transportation and bus replacement taxes to debt service. Decatur Township and Westfield Washington could keep less than 10 percent of their non-debt levies.

“We know that is not the intent of the General Assembly,” said Denny Costerison, executive director of the Indiana Association of School Business Officials. “We’re trying to find a way to transition through this, to lessen the blow of protected taxes.”

School corporations with high debt, declining assessed value and a large proportion of residential taxpayers are feeling the biggest sting.

A pair of bills making their way through the Legislature aim to address the problem by reverting to the previous share-the-pain approach. Senate Bill 70 recently got a hearing and is on hold pending amendments, and House Bill 1062 is up for discussion Jan. 21 at the House Ways and Means Committee.

Legislators failed to pass similar legislation in 2013, instead agreeing to delay implementation of the protected-levy law until this year. Costerison said the 2012 measure was not necessary, since Indiana already requires school corporations to pay their debt or lose state funding.

“This is an allocation issue. We’re not asking for more money,” said Mike Reuter, chief financial officer of Hamilton Southeastern Schools in Fishers.

Still, schools statewide have been pinching pennies since tax caps were put in place in 2009. With tax payments limited to 1, 2 or 3 percent of a property’s assessed valuation—and values dropping as a result of the nationwide housing bust—even fast-growing districts like Hamilton Southeastern have had to find ways to do more with less.

Although Fishers schools aren’t among the hardest-hit by the protected levy law, officials already are looking for ways to cut $5 million from its budget. Losing flexibility in its tax-supported funds will only complicate the process.

Decatur Township schools lost $6 million to tax caps last year and officials expect that to increase to $7.5 million in 2014. Before protected levies, the district made up a $650,000 shortfall in its transportation fund by tapping its general fund and “rainy day” savings. With the change, the gap will grow to $2.2 million—leaving just $250,000 to operate buses.

Officials have reduced expenditures more than $12 million over the past three years, said Prusiecki, who became superintendent in August.

“Our past practice has been to make the budget work,” he said. “But after $12 million of cuts, there’s not much left we can do indirectly.”

If the referendum does not pass, Prusiecki said the school board will have to consider closing schools and eliminating staff. It has not yet considered passing a resolution to discontinue transportation—a step the state requires—but he said members will discuss that at their February meeting.

“We didn’t want to do that concurrently with the referendum,” he said. “We’re looking for ways to maintain the services we currently provide.”

Westfield Washington’s resolution, which passed 4-1 in September, said the district will “investigate” the possibility of another operating referendum (voters in 2010 approved an extra 23-cent tax per $100 of assessed valuation), but “unless sufficient revenue is generated,” it will stop transporting students after Dec. 31, 2016.

Superintendent Mark Keen called the idea of going back to Westfield taxpayers for help “unacceptable,” saying they already contribute more than they get back in public services.

“Wealthy communities do not have wealthy schools,” he said.

And the alternatives are equally untenable: Ask the state’s Distressed Units Appeals Board for permission to restructure all the district’s debt—extending payments in the process—or cut expenses to free up the $3.2 million in lost transportation funding (not to mention $3.5 million for building maintenance).

Already grappling with the impact of almost $7 million in annual tax-cap losses and a steep drop in assessed valuation due to business closures tied to the U.S. 31 construction project, the district said it doesn’t have much fat left to trim.

“We’ve reduced expenses so many ways, but we have not touched classroom teachers yet,” Keen said. “Our job is to educate kids. To cut back on that to pay for transportation seems ludicrous.”

The clock is ticking on Westfield’s buses, but the superintendent is hopeful a legislative remedy will allow the district to reverse course. Asking students to walk to class is far from ideal, he said, and schools were not designed to accommodate the heavy traffic that would result from daily parent drop-offs.

Parking the buses—or any of the unsavory alternatives—also could affect economic development in the growing community.

“Who’s going to want to move to Westfield if we don’t transport kids to school?” Keen asked. “If we have 35 kids in a class? If we have a high referendum rate? … One of the main reasons people come here is our schools.”

Costerison is focused on resolving the protected-levy issue, which he said affects districts of all sizes through the state.

“It’s a real negative,” he said, and it’s important to find a solution that minimizes the impact outside schools’ business offices. “Bottom line, what is the impact on students? That’s what we’re about here.”•