Few orchestral pieces written in the last 100 years are more familiar to mass audiences than George Gershwin’s “Rhapsody in Blue” and “An American in Paris.”

One of the big differences between the two, though, is their associations. “Rhapsody” has been used in everything from Woody Allen’s “Manhattan” to Disney’s “Fantasia 2000” to last year’s “The Great Gatsby.” It doesn’t carry with it the anchoring imagery that “An American in Paris” does, thanks to the 1951 Oscar-winning film of the same name.

While “Rhapsody” can take you just about anywhere, “Paris” interpreters have to contend with the imagery created by actor/choreographer Gene Kelly and director Vincent Minnelli.

Or so I thought.

In “American Rhapsody” (performed Jan. 9-12 at the Indiana Repertory Theatre), choreographer David Hochoy paired a new take on “An American in Paris” with a revival of his 2006 “Rhapsody.” Only in the opening moments did I think of Kelly charming his way through Hollywood’s version of French streets. Instead, DK defined the music on its own terms, offering an innocent, earnest Brandon Comer, a none-too-fatale temptress Caitlin Negron, and a collection of dancers who pulsed with the energy of Gershwin’s music. 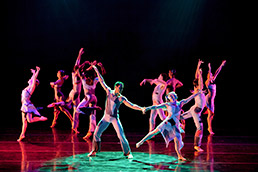 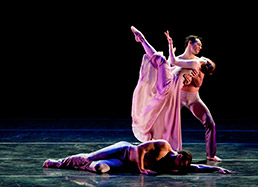 Both Comer and Negron illustrated the, for want of a better word, niceness that seems to be permeating the latest iteration of Dance Kaleidoscope. That’s not a bad thing. With a company of dancers that never shifts into arrogant showboating, it’s easy to like the work being offered by the troupe these days. It resists the “gasp” moments that define TV dance shows (although a lengthy one-armed lift seemed to leave the audience collectively holding its breath at the performance I saw).

Even though written (and, for that matter, choreographed) years apart, the pieces seemed part of a whole, buffered by “Farewell,” a short work from Hochoy’s Martha Graham Dance Company days with music by Heitor Villa Lobos. The result was a satisfying program long on positive energy, athleticism, grace and personality—one that seemed less interested in fire and more on smile.•

• Want more Gershwin? Michael Feinstein, who famously worked for lyricist Ira Gershwin and documented the experience in his terrific book “The Gershwins and Me,” will be performing a tribute concert to the musical brothers Feb. 16 at the Palladium.

• Want more Dance Kaleidoscope? Next up is “Kings and Queens of Country” March 6-16 at the IRT and March 22 at Brown County Playhouse. DK’s gala is Feb. 22 at the Indianapolis Marriott Downtown.
__________