From the 1930s to the mid 1960s, industrial uses along the railroad tracks on the south side of East Washington provided thousands of jobs for east-siders. Two architectural landmarks, the Ford and Mallory factory buildings, back up against the tracks and remind us of our urban manufacturing history.

The five-story P.R. Mallory and Co. production and headquarters building opened in 1929. By 1966, the building housed 1,500 employees working on the company’s famous Duracell batteries. Mallory eventually bought the Ford factory for expansion. Today, a former business unit of Mallory employs about 115 people at the back of the Mallory site. Ivy Tech Community College uses the former Ford factory for automotive tech courses and storage.

For the past eight years, local community development corporations and the city have searched for a way to save and reuse the Mallory building. The city owns surrounding sites and has cleaned up brownfield properties. Englewood Community Development Corp., Southeast Neighborhood Development and Indy-East Asset Development have formed the East Washington Street Partnership to champion revitalization of the corridor.

A 2010 plan proposed turning the Mallory area into an advanced manufacturing business park. The proposal called for tearing down existing buildings, erasing the traditional street grid, planting sod, and installing a bean-shaped retention pond and a fence. It repeated the same mistake that has dismantled much of East Washington: trying to replicate the suburbs in the city. 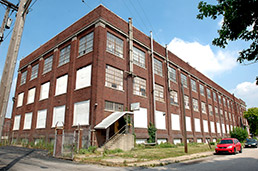 The vacant Mallory could be a catalyst for neighborhood revival. (IBJ File Photo)

Ironically, the proposal would have torn down a variety of work spaces that small and innovative businesses can use to jump-start the area’s revitalization. The smaller buildings and lots offer ownership opportunities for local businesses. The improvements to the larger and flexible-floor-plan buildings, like the 60,000-square-foot Mallory plant, can be phased and tailored to house a variety of tenants.

ReEnergize East Washington Street is the most recent plan for the corridor. The plan was prepared by Englewood Community Development and its consultants: Anderson+Bohlander, Greenstreet and Blackline Studio. This vision for East Washington leans heavily on the traditional strengths of the community’s walkable residential, institutional, commercial and industrial block and street patterns rather than erasing them.

The Mallory is identified as a catalyst project in the plan. The future of the Mallory is further defined in the updated 2014 Near Eastside Action Plan. The action plan proposes a live, work, play and learn district called Make it Mallory. Rather than scraping the site clean for a large-scale suburban office park, the plan is realistic. It is grounded in the building and lot patterns of a historic industrial neighborhood that are perfect for bite-size reinvestment. Make it Mallory supports local businesses while making it possible to grow more.

The Make it Mallory proposal includes renovating and weatherizing older homes, building net-zero-energy senior housing and mixed-use structures. It also calls for a charter school, the renovation of smaller commercial and industrial buildings, and improvements to the East Washington Library and other institutional services. The mix of new and enhanced uses would solidify the area as a neighborhood center.

The Mallory block is envisioned as an educational and creative campus, including a makers (artisan builder) concept for the Mallory building itself. The idea is borrowed from the 30,000-square-foot Ponyride building in Detroit. It provides an opportunity to expand the traditional definition of creative industry pioneers (such as in fashion, architecture and film) to include making and manufacturing.

Innovative, small-scale manufacturing is a centerpiece of Detroit’s Creative Corridor economic development movement. The effort is focused on attracting creative industries, advancing creative talent and connecting innovative businesses. With millions of square feet of vacant industrial buildings and a tradition for making stuff, it seems a natural fit.

An important institutional catalyst has been Detroit’s Center for Creative Studies, a nationally recognized design school. The school recently renovated the former 760,000-square-foot Argonaut Ford facility into an urban campus of classrooms, studios and housing.

We have been struggling to repurpose our urban industrial areas and buildings. Indianapolis has a chance to view the buildings and blocks as unique assets. We do not need to tear them down. Rather, we should make the buildings available to innovators that need flexible, cheap space to design, build and collaborate. Our universities have an opportunity to promote and partner with these budding creative industries in the process.

East Washington Street needs a catalyst project that can set the tone for reinvestment. The Mallory building, former Ford factory and dozens of other small, vacant commercial and industrial buildings are the key to the future. They can become the venues of innovation for Indianapolis’ creative corridor on East Washington Street.•

Bruce Race, FAIA, FAICP, is an award-winning architect and urban planner, owner of RaceStudio, and recipient of the Indiana Sagamore Planning Award. He lives in a historic Indianapolis neighborhood and teaches urban design at Ball State University’s Downtown Indianapolis Center. His column appears monthly. He can be reached at [email protected]