His “LOVE” statue is certainly easy to love. And “Numbers” might number among your favorite sculptures. But, like me, you might have trouble warming up to much of the rest of our state’s namesake artist, who is celebrated at the Indianapolis Museum of Art in “The Essential Robert Indiana” (through May 4).

That in no way diminishes the significance of the show—the first print retrospective of Indiana’s work in 40 years.

“LOVE” and “Numbers” (and their various spin-offs) aside, Indiana’s work can feel both confrontational and off-putting. Yes, pairing the words in “EAT/DIE” invites a wide range of reactions in a viewer, but many of the other pieces include numbers, names and words understandable only to the artist. 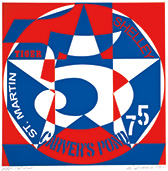 “You can look,” the artist seems to say, “but don’t try to understand.” That distance and the similarities in much of the work, make it easy to glide from one road-sign-inspired, brush-stroke-hidden print—bold and free of color modulation—to the next.

“The Essential Robert Indiana” creatively gets past the artist’s deliberate roadblocks, though. In addition to incorporating explanatory material from interviews with and talks by the artist, the IMA has included a useful, succinct and mercifully silent video on the print-making process.

The curators also give visitors a hint, emotionally, into Indiana’s artistic process with a station to create your own version of Indiana’s signature autoportraits. More than just a way to keep the kids busy while you look at the work, the area leads participants in an exploration of dates, names and colors important to their own lives. Afterward, the work on the walls echoes differently.

Another wise—and playful—move is the distribution of Indiana’s “Numbers” sculptures—which have a storied history of their own—throughout the building and the IMA grounds. The iconic digits show up individually and in pairs, with “1” serving as a welcome into the exhibit proper. (A separate, free, exhibit on the fourth floor gives some of the history of “Numbers,” originally commissioned by what’s now Simon Property Group Inc. to celebrate its 20th anniversary.)

Like Indiana’s career itself, the numbers are a mix of overt commercialism and interesting artistic choices. On one hand, they serve as giant advertisements for the special exhibition which, unlike the rest of the museum, carries a cover charge. On the other, they remind us that, in art, context can strongly contribute to character.

The exhibit itself ends with Indiana’s “HOPE,” a reworking of “LOVE” that debuted as a sculpture at the 2008 Democratic Convention. Depending on your perspective, it can be read as either an exciting rebirth of one of the 20th-century’s signature artworks or the further co-opting of an already co-opted image. That’s your call.•