A new owner plans to invest $51.4 million to overhaul the former Noblesville Foundry on South Eighth Street, resurrecting a property that has been underused for years.

ID Castings LLC officials did not return messages from IBJ, but a tax-abatement application filed with the city provides a glimpse of the proposed project. About half of the facility is targeted for demolition, an existing production line will be refurbished, and two new lines are in the works.

The company, founded in October, has 27 workers at the site now, and plans to add another 25 with an average salary of $35,525, according to the application. 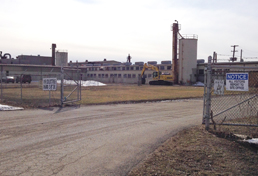 The 13.9-acre foundry site has become an eyesore after years of underuse. (IBJ Photo/Andrea Davis)

On the table: a three-year abatement on personal property taxes tied to the $31 million in manufacturing equipment it plans to install. The temporary tax break would save the company almost $1.3 million.

ID Castings acquired the 13.9-acre site and a warren of well-worn foundry buildings in October. Previous owner Indiana Ductile LLC bought it in 2004, according to Hamilton County tax records.

The property was assessed for tax purposes at about $1 million last year. The operation dates back to the late 1800s, when the Noblesville Foundry Machine Co. opened at the corner of Division and Seventh streets.

Historical files in the Hamilton East Public Library’s Indiana Room show operations continued under the name McElwaine Richards Co. Machine Works (which moved the facility to Eighth Street) and later Union Sanitary Manufacturing Co., which made enameled bathtubs and the like.

Over time, production transitioned to a wide range of metal parts, and the company eventually become known as Noblesville Casting Co., Indiana Room caretaker Nancy Massey wrote in an email.

Eventually production slowed, and the buildings have been largely unoccupied for years.

“The property is in deep disarray,” said Judi Johnson, Noblesville’s economic development director. “It has been an eyesore for years.”

To encourage redevelopment, the city spent about $71,000 from a federal brownfield assessment grant on a so-called Phase 2 environmental study of soil and groundwater on the site. Johnson said the results helped persuade ID Castings to proceed with the project. Site cleanup already has begun, she said.

The Noblesville facility is capable of producing more than 1 million castings per year, according to the website, but it also works with customers who need as few as 500 pieces.

Johnson deferred questions about project plans to the company. A representative is expected to attend the council meeting Tuesday.

Noblesville Chamber of Commerce chief Sharon McMahon is encouraged by the efforts to spur redevelopment on the site just south of downtown.

“It speaks well of the city’s foresight to encourage use of the property and of those who wish to make it a viable part of Noblesville again,” she said.