Philanthropic arts patrons are asked time and again to attend fundraisers for their favorite organizations (and for the organizations where their friends have seats on the boards). The challenge for the organizations themselves is to create events that feel less obligatory and more pleasurable. Ideally, those pleasures tie in with the core mission of the group in question.

One group that succeeds at that task is the Center for the Performing Arts, which offered its Great American Songbook Hall of Fame Gala induction on June 21.

Oh, you could complain about the after-party’s long food lines or the awkward placement of bands (primarily facing walls and windows rather than attendees in multiple lounges). But the core event itself—the honoring of the latest round of inductees into the Great American Songbook Hall of Fame—was perfectly in tune with the organization.

The point—in addition to raising money for the center—is to pay tribute to performers and composers “responsible for creating America’s soundtrack.” Think of it as a more narrowly focused version of The 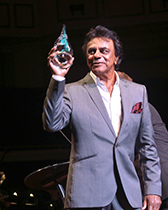 Legendary vocalist Johnny Mathis accepts his honorary award at the Center for the Performing Arts. (Photo courtesy of Angela Talley)

With Jones and Mathis graciously accepting awards—although not performing—Natalie Cole charmingly standing in for her father, and Michael Feinstein hosting (and, in good voice, working in performances of three songs), there was plenty for those who wanted to see “names.” (Ronstadt, battling Parkinson’s disease, could not attend.)

The evening’s greatest pleasure was a new one, at least to me. Singer Denzal Sinclaire, backed by a terrific band of local players, offered a tribute to Cole that honored the man without imitating him. I don’t usually like medleys—they tend to be a “Remember this one?” hit parade with little time to plumb the heart of each song—but Sinclaire managed to put truth into every syllable with a sound that sent me running to YouTube as soon as I got home. I can’t recall a time when I so quickly became a fan of a performer. Here’s hoping he finds his way here for a full concert soon.

Also charming the crowd was Julia Goodwin, last year’s Great American Songbook Vocal Competition winner. That not-to-be-missed July contest serves as a nice companion piece to the Hall of Fame Gala, one event honoring those who have already contributed to the American musical canon and the other encouraging the next generation to pick up the torch (song).•