Does anyone who ever set foot in a theater not know the story of how linguist Henry Higgins bets his pal Pickering that he can transform cockney flower girl Eliza Doolittle into a society-worthy lady?

Does even the most casual of theatergoers not know Eliza just wants a room somewhere far away from the cold night air, that Eliza’s papa will need to get to a church on time, or that a series of speech exercises about weather conditions in Europe will erupt into one of the most joyful trios in musical theater history?

But a good production of “My Fair Lady” needs to treat these familiar characters as people instead of icons and the songs as spontaneous bursts of emotional truth, not as a greatest-hits package. Actors Theatre of Indiana’s production (at the Studio Theatre through Sept. 28) does just that.
&nb 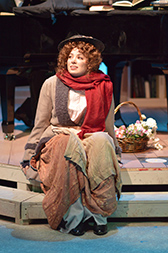 Erin Oechsel finds the “duchess,” below, in the lowly flower girl, above. (Photos courtesy of Actors Theatre of Indiana )

It’s a charming and winning take on the show, likely to please both newbies and those who wore out their copies of the original cast recording (a chart-topper for two years back when cast recordings actually had the potential to top the charts).

Unlike its good-enough production of “Gypsy” a few seasons back, ATI’s “My Fair Lady” doesn’t feel like it’s been compromised to fit the space or budget. OK, so its cast has been cut back to 10 and its once-full orchestra reduced to just two on-stage pianists, but Director Richard Roberts has turned those into virtues, giving the show the feel of a private production in a wealthy friend’s recital room.

In the process, he makes a solid case that spectacle isn’t essential to the pleasure of “My Fair Lady.” So what if we don’t see the ballroom where Eliza is put to the test? Who cares if Higgins has a limited staff of servants and the crowd outside Covent Garden is a bit thin?

What is essential to a strong “My Fair Lady” is the casting of the lead actress. She has to earn the laughs and hit the notes while convincing us she’s a flower girl, a knowing daughter, a student who can pass as a duchess, a woman in love, and a young lady who discovers her own strength and is both scared and joyful about it. 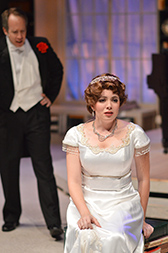 Speaking of footwear, one of the most problematic elements of “My Fair Lady” is what to do with the slippers. For the benefit of those unfamiliar with the show, I won’t explain the problem. But suffice it to say that the final moment of the play can easily be cringe-inducing for anyone with a hint of respect for women. Here, though, without even an altered syllable, Director Roberts finds a perfectly equitable solution that also earns a big laugh. And finds another in the curtain call.

Oechsel is surrounded by a strong team of performers, including ATI partner Cynthia Collins as both Mrs. Pearce and Mrs. Eynsford-Hill, Paul Hansen as Pickering, Vickie Cornelius Phipps as Mrs. Higgins and in other roles, and Darrin Murrell as a sour-faced Alfred Doolittle.

Doug Trapp’s Higgins might not prove particularly memorable, but the role is exceedingly well sung and believable throughout. It’s a character that gets trickier as time passes. In George Bernard Shaw’s original play, Higgins could be a misogynist ass without having to transform into someone we want Eliza Doolittle to end up with.

Trapp makes the transformation subtle but clear. When he sings about growing accustomed to her face, not only is the realization believable but so is his own amazement that he’s capable of such emotion. Henry and Eliza never speak of love, but the feeling is palpable.

As for me, I could have watched all night and still have begged for more. Heart taking flight, indeed.•