Indiana House Democrats chose Rep. Scott Pelath, D-Michigan City, as their leader after the 2012 election that reduced their 39-member minority to 31 and gave Republicans a super majority.

IBJ: Republicans don’t even need you in the room to pass legislation. Why should they listen to you?

PELATH: But they do. Being the leader of this caucus has been an unmitigated joy. We have opportunities to remind people of why Indiana’s run better when Democrats have a seat at the table. Through our voices and our problem-solving abilities, and our fundamental character of being reasonable, we’ve been able to continue to help make key decisions here in Indiana. 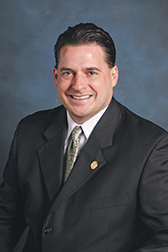 Were it not for House Democrats, that ugly and divisive issue of marriage would be on the ballot this fall. And it’s not. That was kept off the ballot by 29 Democrats and 23 Republicans. That was the biggest issue facing Indiana this past legislative session, and we were the ones that gave the state decisiveness.

IBJ: You and Republican Sen. Mike Delph were Alpha Sigma Phi fraternity brothers at Indiana University. What was that like?

PELATH: We give each other a hug when we see each other and people always wonder why. I’ve known Mike Delph since before he was Mike Delph. Before Senator Delph. I don’t ever remember discussing politics with him. He was just Mike. He lived down the hall. He wasn’t just an acquaintance. He was and is a friend. Having said that, we don’t agree on very much.