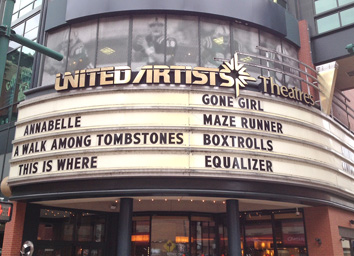 Moviegoers at Circle Centre mall’s nine movie theaters soon will be able to kick back and enjoy their favorite flicks from a reclining chair just like they might at home.

The La-Z-Boy-type recliners, complete with padded footrests, will replace the existing, traditional seats as part of a renovation by the owner of the downtown cinema, Knoxville, Tennessee-based Regal Entertainment Group.

Regal, which operates 573 theaters across the country with roughly 7,340 screens, has only undertaken the conversion so far in 30 locations, Regal spokesman Russ Nunley said.

“We believe that the growth and vitality of downtown Indianapolis is attractive to make this investment,” he told IBJ. “And we believe the audience there will be highly responsive to these luxury amenities.”

The cost of the project likely will exceed $1 million, but Regal declined to divulge the budget.

Construction should begin within the next week and be finished in December. The work will be done in stages to allow most of the theaters to remain open during the revamp.

Each of the nine theaters, which are configured differently and have varied amounts of seating, will lose about half their capacity. But converting conventional seating to reclining chairs has proven to make better business sense, Nunley said.

“It seems counterintuitive to increase business by reducing capacity,” he said. “But we do see higher seat utilization in the newer configuration. While we have our peaks Friday and Saturday nights, you’ll see other time periods increasing in customers [too].”

Total current seating for the theater is about 2,000, according to Regal. After the seat switch, it will be just under 1,000.

The conversion to recliners represents one of the biggest changes to the Circle Centre theater since the mall opened in 1995. The theater originally was operated by United Artists, which Regal purchased in 2002.

Per the lease arrangement, mall operator Simon Property Group Inc. is contributing toward the tenant improvements. Nunley declined to divulge terms of the agreement or the total cost of the renovation.

AMC Entertainment Holdings Inc. has embarked on a more aggressive renovation of its cinemas, and has pledged to spend $600 million over the next five years to "reseat" 1,800 of its nearly 5,000 screens, according to a July 6 article in The Wall Street Journal. That works out to about $330,000 per screen; the article said that the renovations typically cost between $350,000 to $500,000 per auditorium.

Regal was said to be taking a more cautious approach, spending less on the conversions and waiting to see how theaters perform before planning more.

Because the chairs recline electronically, running wires is a large part of the construction process, Nunley said.

“In general, movie theaters really add to the whole experience of the shopping center,” he said. “It’s a great amenity to have, and to make it even more comfortable and inviting to movie fans is great.”

Two of the recliners are located in the lobby of the theaters on the fourth floor of the mall for guests to experience.

Other recent upgrades Regal has made to the mall’s theater include the conversion from celluloid film to digital cinema.