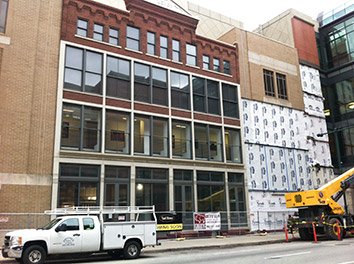 Both restaurants would occupy about 9,000 square feet on the ground level, with Nada directly east of Yard House and Dinosaur filling space next to Nada at the corner of Maryland and Meridian streets.

The increased interest in the former Nordstrom space bodes well for both downtown and the one-block stretch of Maryland, which has been hindered by vacancies on both sides of the street since 14 West closed in 2012.

Jeff Laskowski in January bought the 14 West building and is in discussions with two regional restaurant chains. He hopes to have a tenant signed within a few months, thanks to what’s occurring across the street.

“It’s going to turn it into one of the busier, hot new sections of downtown,” Laskowski predicted. “The two people that are looking at the space see it as being more valuable simply because those names are coming in.”

Construction is under way to retrofit 13,460 square feet at 42 W. Maryland St. for Yard House, which plans to open sometime in the spring.

The three restaurants would fill the ground-level strip on Maryland Street that was part of the larger 210,000-square-foot hole left in 2011 by former anchor tenant Nordstrom.

L.A. Fitness also appears to still be in the mix. The gym has been exploring space within the mall and may be interested in locating on the third floor, brokers said.

The Indianapolis Star’s move Sept. 29 into three floors at the south end of the mall has helped spur interest in the remaining space, said Brian Epstein of Urban Space Commercial Properties, whose office is just south of the Star.

“[Simon] could have put restaurants down there two years ago if they wanted to, but I think they were concerned about getting someone in the upper floors first,” he said.

Founded in 2007, Nada has just one location, in Cincinnati, and is set to open another in December in Columbus, Ohio. Representatives of the restaurant could not be reached to discuss plans for Indianapolis.

Nada’s dinner menu features appetizers, soups and salads, a variety of tacos, and entrees ranging from chicken and corn enchiladas to a grilled adobo-rubbed pork chop, priced from $18 to $24.

Dinosaur Bar-B-Que has eight locations in New York, New Jersey and Connecticut. The chain’s first foray into the Midwest will take it to Chicago in February.

Local brokers say Dinosaur’s lease at the mall hinges on city approval of its façade treatment. A spokesman for the Metropolitan Development Commission said the city is aware of the restaurant’s plans, though nothing has been filed.

Reached by phone, a spokesman for the barbecue restaurant would only acknowledge that, “We’re interested in the market.”

Dinosaur, founded from a food truck in 1988, is known for signature dishes such as brisket, pulled pork and barbecue chicken. In 2009, “Good Morning America” named Dinosaur the best barbecue joint in the country.

Landing the restaurants would be a major boon for downtown, where certain retail space has been difficult to fill with the completion of several mixed-use projects with apartments above first-floor retail.

Downtown’s retail vacancy rate of 18 percent in the third quarter was highest among all submarkets in the metropolitan area. Lafayette Square and Washington Square weren’t far behind, with rates above 13 percent, according to data from Cassidy Turley.

“I think there’s some good activity in the market for sure,” said Gary Perel, a retail broker at Newmark Knight Frank Halakar.•