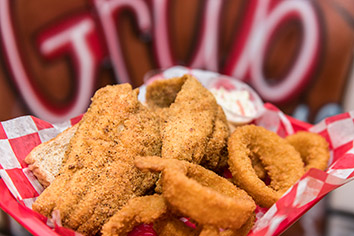 I’m thrilled when an ambitious eatery opens that has the potential to increase our reputation as a food-forward town. But I’m equally happy when a neighborhood place opens where I know I can reliably count on good eats at a good price, ideally prefaced by free and easy parking and partnered with friendly service.

It would be easy to drive past this just-a-few-months-old eatery as you drive from Mass Ave to Broad Ripple or vice versa. Housed in a nondescript building with signage parallel to the street, you might not even notice it unless you saw folks exiting with bags of takeout (there was a constant parade on both of my visits, testament to The Grub House’s neighborhood popularity).

Inside, a wall-covering mural featuring giant utensils, the Indianapolis skyline and the restaurant (whose chimney smoke playfully wafts toward the real vent) sets a casual mood. Service is friendly and accommodating—it might say more about other neighborhood eateries than it does about this one, but it’s refreshing at lunchtime to have a waitress ask if a customer would like to have the TV turned down, off, or to a different channel. I appreciated the request. And the place was meticulously clean.

The big draw here is breakfast served all day (“all day” meaning store hours of 7 a.m. to 7 p.m.). Over a morning meeting, we were happy to be met with fried biscuits with just a sprinkling of powdered sugar—accompanied by apple butter packets. Putting five in a basket for three of us seemed a bit cruel, though. I suppose we could have asked for a sixth to avoid a stare-down.

The Salmon Croquette ($9.25) featured two patties with green onions, a fluffy texture, and a just-right light, crunchy crust. A side of grits was creamy but unexceptional. The over-medium eggs were clearly prepared the “old-school” way, deliciously fried in the pan drippings of the salmon croquettes.

All breakfast entries are served with toast or biscuit, two eggs, and a side. Again, small pleasures, but it’s nice when a waitperson elaborates on what’s going to be in a fruit salad, even if it’s a small side.

For those not in breakfast mode, The Grub House also offers breaded pork chops, club sandwiches and Philly cheese-steaks. The Catfish special ($9)—highlighted on a chalkboard wall—included a pair of satisfying fried fillets served on bread. Nothing fancy, but a spot-hitter when the mood hits.

Despite buildup from the waitress, a square of 7-Up Cake ($2.50) wasn’t anything special. Next time—and there will be a next time—I’ll try the cobbler.•