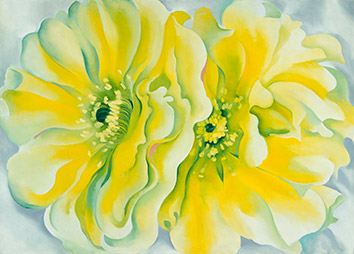 Ideally, a visitor to “Georgia O’Keeffe and the Southwestern Still Life” at the Indianapolis Museum of Art (through Feb. 15) should take at least two trips through the exhibit hall.

I usually recommend that for any exhibit, the better to have a richer, more contemplative experience once one has taken in the scope of a show.

That nuanced difference means O’Keeffe’s work might be prominent, but it’s not exclusive. The organizers of the show have put some key O’Keeffe works in the context of other, lesser-known artists. Those drawn by the big name (both in artist stature and in poster font) might at first be surprised to be greeted by work by, for instance, Shelbyville native Victor Higgins, who made a name for himself in Taos.

At the Indianapolis Museum of Art, Georgia O’Keeffe’s “Yellow Cactus,” top, and “Deer Horns,” above, are juxtaposed with the work of lesser-known Southwestern artists working with similar themes. (Image courtesy International Arts)

Those here for O’Keeffe might be tempted on first visit to make a beeline for her paintings, seeking out the familiar floral close-ups, the elemental skeletal forms, and the stark doorways while skipping over the works of others that make up the bulk of the show.

Those grazers will find “Jimson Weed” prominently featured—and I couldn’t help but wonder if those contemplating it know that can be seen any time of the year just across the hall as part of the IMA’s permanent collection. I hope the answer to that question is, “Of course.” Ideally, those picking up tickets to this exhibit also realize the treasures that are always available to see, at no charge, throughout the building.

On-loan pieces include O’Keeffe’s “Mule’s Skull with Pink Poinsettia,” whose title alone is enough to suggest the contrast, and a quartet of paintings making use of a doorway that held a particular fascination for the artist.

Once the O’Keeffes have been visually caught and released, a second trek should allow visitors to better appreciate the context her work has been given. While O’Keeffe drew her inspiration from the cultural richness, stark landscapes and natural beauty of the American Southwest (first visiting in 1917 and moving there in 1949), she wasn’t alone. Artists colonies evolved and O’Keeffe’s contemporaries used similar imagery to fuel their own work, albeit with very different results.

Beatrice Mandelman’s “Dress Maker’s Form and Horse’s Skull” doesn’t attempt to re-create the natural colors of these objects while redefining the space around them. Emil Bisttram offers a cubist cactus (nicely placed next to O’Keeffe’s “Yellow Cactus”). And pushing the definition of still life, Dorothy Morang’s “Garden of Eden” boldly depicts snake-like leaves and a seed attempting to penetrate a surface.

On that second visit, you might try drawing your own still life in a more-prominent-than-usual interactive gallery near the show’s midpoint. There, you can sketch your own interpretation of an under-glass collection of O’Keeffe-ish objects.

You can also take better advantage of the audio stations—including one short segment where O’Keeffe denies the common sexual interpretation of her flowers. Of those who do, she says dismissively that they are “talking about their own self, not about me.”•