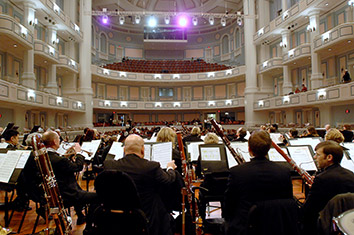 The defendants in a multimillion-dollar legal dispute over construction defects at Carmel’s tony Palladium concert hall have agreed to settle the dispute, court records show.

A Hamilton County court on Monday canceled all scheduled hearings in the years-old case—which had been set for a 2015 trial—noting that the parties had reached an agreement.

Terms were not disclosed, but IBJ reported in March that the Carmel Redevelopment Commission has spent more than $6 million on Palladium-related legal claims in the past five years.

The proposed settlement won’t be final until the Carmel Redevelopment Commission signs off on the deal. The commission meets Wednesday evening, so details could become public then.

The CRC sued Michigan-based Steel Supply & Engineering Co. in 2011 over Palladium roof defects that halted construction of the signature venue for three months amid concerns about a possible structural collapse. The delay set off a chain reaction of scheduling problems that disrupted the project, leading to a flurry of contractor claims for lost time and other damages. Steel Supply's insurer and subcontractor Creviston Engineering also were named in the suit.

Steel Supply has denied responsibility, blaming the project engineer for faulty design that resulted in a rip in the structural steel web supporting the Palladium’s domed roof.

The engineering firm of record on the Palladium project, Indianapolis-based Lynch, Harrison & Brumleve Inc., was not named in the lawsuit, but last month agreed to pay $800,000 to avoid future legal claims.

CRC attorneys have negotiated several deals tied to the Palladium project in the past year: In February, commission members agreed to pay subcontractor Crider & Crider $575,000 for excavation work, and in May they OK’d a $730,000 payment to concrete contractor Hagerman Construction Corp.

And last November, they struck a deal with project manager Shiel Sexton Corp., letting the Indianapolis contractor off the hook in exchange for the company’s forgiving more than $200,000 in promissory notes from the CRC and the Palladium.

Resolving the case will give CRC finances a much-needed boost. The redevelopment panel has been under fire for accumulating $486 million in debt, and the semi-annual payments eat up most of its revenue.

A draft 2015 budget released Tuesday during a CRC finance committee meeting showed the commission finishing this year with a cash balance of $1.7 million, due in large part to “partial settlement” of the Palladium litigation, Executive Director Corrie Meyer said during her presentation. A May “update” of the 2014 budget projected a year-end balance of less than $50,000, even with an expected $1 million from the sale of real estate.

If everything goes as planned next year, CRC’s 2015 revenue should exceed expenses by $520,000—not counting any new settlement proceeds, which were not included in the draft budget.